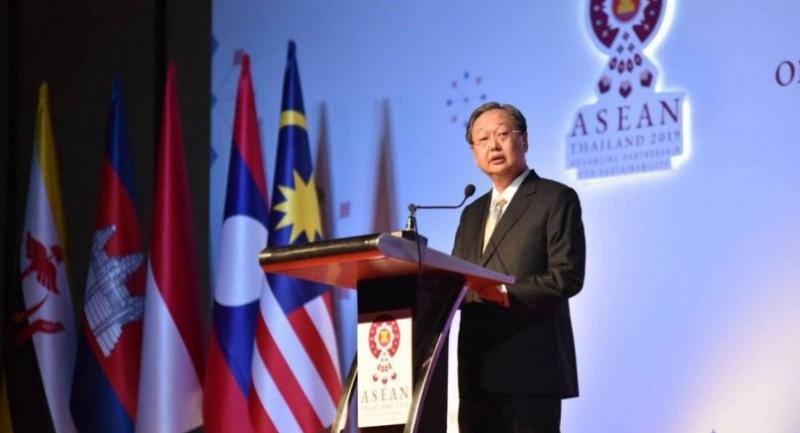 IN ITS FIRST move as this year’s Asean chair, Thailand is pushing for a cohesive regional industrial 4.0 development plan and to implement guidelines on non-tariff measures across the region.

Thailand’s aim is to drive the region forward by laying emphasis on the development of industry 4.0 under the main theme of “advancing partnership for sustainability”, said Commerce Minister Sontirat Sontijirawong, who will chair the meeting of Asean’s economic ministers in April.

Sontirat was speaking yesterday at the “Special Session on the 4th Industrial Revolution (4IR)” seminar in Bangkok, organised by the ministry’s Department of Trade Negotiations.

“The Asean region had a combined GDP at almost $2.7 trillion in 2017, four times the value in 2000. The GDP growth in the Asean region has clocked an average rate of 5.3 per cent since 2000,” said Asean secretary-general Lim Jock Hoi. “At this rate, Asean is set to be the world’s fourth largest economy by 2030.”

Asean members will need to capitalise on the opportunities presented by 4th industrial revolution (4IR) technologies to maintain this fast rate of growth, he said.

Top of the five 4IR deliverables is an Asean Declaration on Industrial Transformation to Industry 4.0. Second is the development of an Asean Digital Integration Framework Action Plan (DIFAP). The Asean DIFAP aims to develop a concrete plan for Asean to advance an agenda of digital integration over the next 12-18 months.

The third deliverable is the development of an Asean innovation road map, to be called “Partnering for Innovative Community.” It will lay out plans to promote the adoption of innovation as a tool in driving Asean forward from 2019 to 2025.

Fourth is to release guidelines on development of skilled labour to address the challenges of 4IR. Finally, Thailand will develop policy guidelines to promote Asean-based microenterprises and to push for their digitisation.

This is to enable Asean microenterprises to penetrate the wider international market through the use of digital technology.

Meanwhile, Thailand hosted the Asean Trade Facilitation Joint Consultative Committee (AFT-JCC) meeting over the past weekend. One of the key issues discussed was the reduction of non-tariff measures (NTMs) between Asean members.

“We came to an agreement to continue to implement the guidelines for eligible NTMs which have been negotiated by Asean’s economic ministers in 2018,” Auramon Supthaweethum, director-general of the Department of Trade negotiations, told reporters on the sidelines of the event. This includes requiring transparency of all NTMs between Asean members, and that they be implemented only when necessary. For example, governments should display their NTMs on their websites in English.

Furthermore, affected parties must be informed before an NTM is implemented so that they are able to express their concerns, she said.

Most importantly, the type of NTMs must comply with the standards of the World Trade Organisation.

Currently, the Economic Research Institute for Asean and East Asia (ERIA) is conducting research in the Asean region to assess the total cost of trade transactions. The results are expected by the end of this year, according to the DTN director-general.

“From the research result, we can determine our policy direction and achieve our goal of reducing trade transaction costs,” she said.