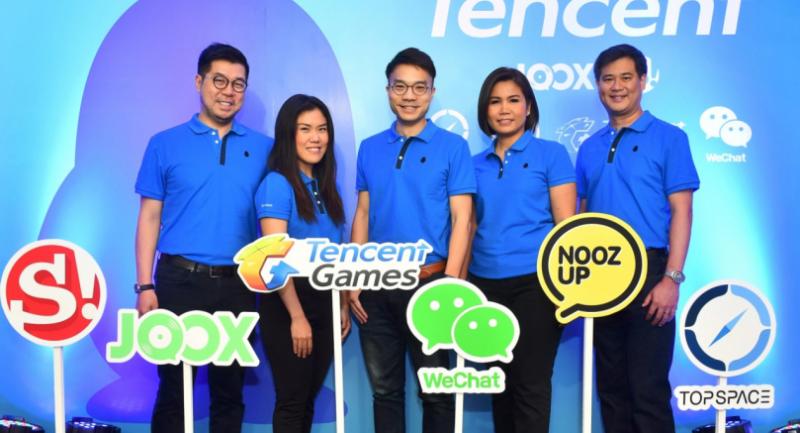 CHINESE holding company Tencent yesterday officially changed the name of its wholly owned subsidiary Sanook Online to Tencent (Thailand), and announced that it would make the Thai unit serve all kinds of digital content across platforms next year.

Tencent (Thailand)’s flagship products are Sanook.com, which has 30 million active monthly users, and JOOX, the largest music-streaming platform in Thailand, which has 22 million users.

Managing director Krittee Manoleehagul said Tencent (Thailand) would focus on three businesses. The news portal will be led by Sanook Online and iPick, entertainment and multimedia by JOOX and Tencent Games, and services by Top Space, an advertising agency.

In the new year, the company will launch new services on each platform and synergise its services across platforms.

“The company’s vision and mission for 2017 are to create content and service platforms that correspond to the lifestyle of every online consumer,” Krittee said.

He said that currently, most of the company’s revenue came from branded content and advertising. JOOX generates revenue from paid services. Meanwhile, Top Space and WeChat are flagship products that help monetise the company’s platforms.

In 2017, each platform will get a new product or service. For example, the firm has soft-launched NoozUp on the news-portal platform. It will launch VStation to offer live interactive content with artists via JOOX. It will focus more on WeChat in enhance the ability of Thai businesses to penetrate the Chinese market.

Krittee said that after Tencent began investing in Sanook five years ago, it had been adding services to the portal.

“This year, we successfully launched JOOX as an online music-steaming platform. It is the right time to show that we are Tencent in Thailand by offering various services to people daily across all platforms.

In 2017, the company will provide platforms for user-generated content, expand its existing platforms’ features, launch new platforms, and partner with Thai start-ups.

“For example, we have partnered with SkillLane for learning services and Ookbee for comic content. We also have a local partner in Laos to provide Muan.la, which was launched in November and has been successful, with 2 million page views per day. In the future, we will have more partners as well as investing in content-related start-ups,” Krittee said.

Sresuda Winitsuvan, head of content at Tencent (Thailand), said Sanook.com had around 36 million monthly users currently, of which around 70 per cent come via mobile devices and 40 per cent through social media.

Krittee said the changes being implemented by the company reflected its commitment to developing new products and services and to expanding its business partnerships in various dimensions so that it can offer a great variety of quality content to users, engaging them as co-creators.

“Our first priority is serving people in Thailand. Tencent (Thailand) aims to become the leading creator, developer and provider of quality content and services that comprehensively respond to all Thai consumers’ needs. At the same time, we also strive to help develop and promote smaller companies and start-ups to complement our platforms.”