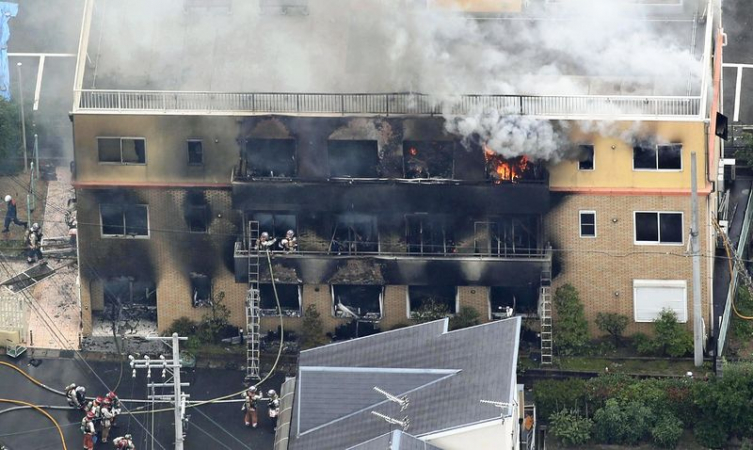 Smoke and flames are seen at a studio building belonging to Kyoto Animation Co in Fushimi Ward, Kyoto, on Thursday./The Japan News photo

Sixteen people died when a fire, possibly caused by arson, broke out at a studio managed by animation production company Kyoto Animation Co in Fushimi Ward, Kyoto, on Thursday morning.

The Kyoto city fire department initially confirmed that one person had died, but dozens were later found in cardiac arrest inside the three-story building. The Kyoto Prefectural Police have since confirmed that a total of 16 had died.

According to the fire department, a nearby resident made an emergency call at about 10:35 a.m., saying they had heard the sound of an explosion.

Officials of the Kyoto Prefectural Police rushed to the studio and found a man, 41, on a road near the studio. The man told them, “I sprinkled liquid on the first floor and set it on fire.”

Police said the man was injured and was receiving treatment at a hospital. Before the fire broke out, the man allegedly entered the building while screaming “Die!”

According to police, a knife was found in connection with the incident. Police said they would question the man on suspicion of arson.

According to the Kyoto Animation website, the company was established in 1981 and its head office is located in Uji, Kyoto Prefecture. The studio has produced many popular TV anime works that have subsequently been adapted as animated films for theatrical release.

Among these is “K-ON!” which depicts the members of a girls’ high school pop band. The company also produced “Suzumiya Haruhi no Yuutsu” (Melancholy of Haruhi Suzumiya).

The studio has produced a wide range of works from fantasies to mysteries. The studio is nicknamed Kyo-Ani and has many enthusiastic fans.

The company has about 150 employees, according to a private credit research company and other sources.