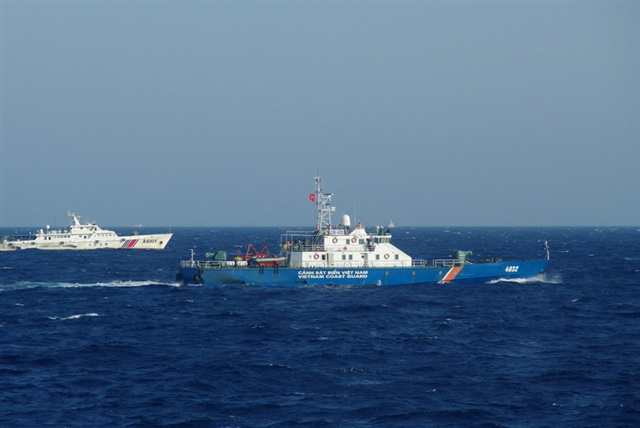 A Vietnamese Coast Guard vessel on active duty. The Vietnamese foreign ministry on Friday demanded that China end its flagrant violations of Vietnam’s exclusive economic zone and continental shelf in the south of the East Sea. — VNA/VNS File Photo

HANOI — The US Department of State has expressed concern over reports that China is hampering other countries’ oil and gas activities in the South China Sea and said its acts threaten regional peace and security.

DoS spokeswoman Morgan Ortagus said in a statement on Saturday that China’s reclamation and militarisation of disputed outposts in the South China Sea or East Sea as it is known in Vietnam, along with other efforts to assert its unlawful maritime claims including the use of maritime militia to intimidate, coerce and threaten other nations, undermine the peace and security of the region.

“By blocking development through coercive means, China prevents ASEAN members from accessing more than US$2.5 trillion (Bt75 trillion) in recoverable energy reserves,” she said, citing an earlier statement by US Secretary of State Mike Pompeo.

These acts by China are interfering in particular with Vietnamese oil and gas exploration and production, she stated.

“The United States firmly opposes coercion and intimidation by any claimant to assert its territorial or maritime claims,” Ortagus added.

“China should cease its bullying behaviour and refrain from engaging in this type of provocative and destabilising activity.”

Vietnamese foreign ministry’s spokesperson Le Thi Thu Hang demanded that China end its flagrant violations of Vietnam’s exclusive economic zone and continental shelf in the south of the South China Sea, which belongs to Vietnam in line with the 1982 United Nations Convention on the Law of the Sea (UNCLOS), to which both Vietnam and China are signatories..

She also noted that Vietnam has made several communications via different channels to make known its objections to China, and that Vietnam’s law enforcement is “adopting proper measures to uphold the nation’s sovereignty and jurisdiction in a peaceful manner and in line with international law.”

China claims the reef bank as part of its expansive “nine-dash line” which covers a large part of the South China Sea, but its claim has been resolutely rejected in an arbitration tribunal ruling by the Hague-based Permanent Court of Arbitration three years ago in the dispute brought by the Philippines against China.