This undated photo shows an aerial view of Shenzhen. (PHOTO / VCG VIA CHINADAILY.COM.CN)

China will support Shenzhen, adjacent to Hong Kong, in building a demonstration pilot zone for socialism with Chinese characteristics, under a guideline issued on Sunday by the Central Committee of the Communist Party of China and the State Council.

It will help better develop the Guangdong-Hong Kong-Macao Greater Bay Area and enrich the practice of the "one country, two systems" principle, according to the guideline, adding that it will be a good way to explore a new path in building a great modern socialist country in an all-around way and providing strong support for realizing the Chinese dream of great national rejuvenation.

By 2035, Shenzhen will become a national model of high-quality development and a globally recognized center of innovation and entrepreneurship

According to the guideline, Shenzhen by 2025 will rank among the top cities in the world in economic strength and quality of development, with intensive research and development investment and world-class industrial innovation capacity.

It will be built into a modern, international and innovative city by then, with its cultural power greatly enhanced and its public service level and ecological environment quality reaching an international advanced level, according to the guideline.

By 2035, Shenzhen will become a national model of high-quality development and a globally recognized center of innovation and entrepreneurship. It will become an example for China to build itself into a powerful modern socialist country, according to the guideline.

By mid-century, Shenzhen will become a global benchmark city in its competitiveness, innovation and outstanding influence, it added. 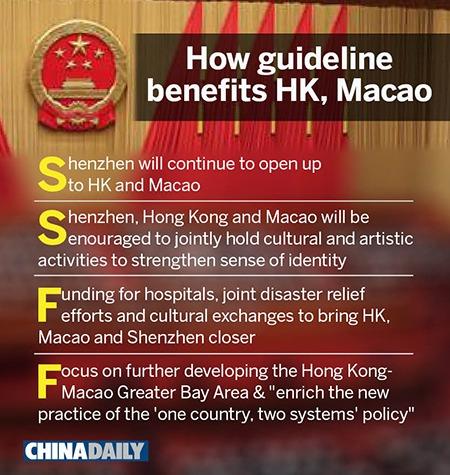 According to the document, the central government will support Shenzhen in implementing a more open and convenient system for the introduction of foreign talent and allow international contributors with permanent residence to set up scientific and technological enterprises in Shenzhen and serve as legal representatives.

Shenzhen will also continue to open up to Hong Kong and Macao. The country will explore the model of collaborative development by the cities and facilitate the efficient flow of personnel, capital, technology and information, it said.

The central government will encourage Shenzhen, Hong Kong and Macao to jointly hold cultural and artistic activities to better preserve their cultural heritage and strengthen the sense of identity of compatriots.

The guideline was reviewed and passed in the ninth meeting of the Central Committee for Deepening Overall Reform on July 24.

Since the start of reform and opening-up, Shenzhen has grown from a small fishing village to a modern metropolis, with its gross domestic product surging from less than 200 million yuan (US$28.4 million) in 1980 to 2.4 trillion yuan in 2018, surpassing its neighbor Hong Kong, according to official data.

With a population of 12 million people, the southern city is known for its strong innovation capabilities. It is home to more than 14,000 national high-tech enterprises and technology giants, including Huawei and Tencent.

Wang Xiaoguang, a professor of economics at the National Academy of Governance, said in an article published on Aug 3 in the Outlook Weekly, a magazine affiliated with Xinhua News Agency, that many precedents of China's reform and opening-up originated in Shenzhen.

It has accumulated valuable experience for China's reform and opening-up and modern construction, and has made significant contributions to exploring the path of socialism with Chinese characteristics, Wang said.

The essential feature of socialism with Chinese characteristics is the leadership of the Party, which plays a central role in coordinating the overall situation, he said, citing Shenzhen as a good example of handling the relationship between market and government since China's reform and opening-up began.