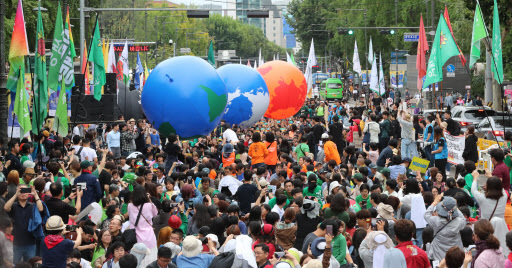 Some 4,000 people gather for a demonstration calling on the government for action on climate change in Daehangno, central Seoul, Saturday. (Yonhap)

Thousands of people took to the streets in central Seoul on Saturday to call for immediate action to tackle climate change, joining millions of protesters around the world in the global movement. An estimated 4,000 people, according to organizers, gathered in Daehakno in central Seoul to criticize the government for its lukewarm response to climate change and to call for more drastic change in energy policies – such as shutting down coal-fired power plants, shifting to renewable energy and cutting other emissions.

“I take individual action, but what is the use when coal-fired plants and steel mills are still in operation and big corporations are producing an unimaginable amount of greenhouse gas emissions?” said Kim Do-hyeon, 15, who co-heads a students’ group campaigning for action on climate change in Korea.

“Adults always tell us to go to a university first. It would be too late by then. We are the ones who have to live in this environment,” she said. “I hope adults stop gambling our future.” Millions of people from some 185 countries took part in Friday’s global general strike, where students skipped school and workers walked out of their jobs to join the biggest climate protest in history.

Adults, who felt guilty about the burden and responsibility they were passing onto the young generation, also joined the Saturday’s demonstration. “I came here because I felt that we should do whatever it takes to address the problem,” said Kim Gi-hun, who teaches first graders in middle school. “I feel sorry that I have not done anything to pressure the government and politicians to tackle the problem.” Led by some 330 environmental civic organizations, labor unions, left-wing political parties and religious groups, protesters chanted “If not now, there is no tomorrow” and “Speak now, and take action right away.” “Justice, rather than growth, and survival, rather than interests, are our priorities,” they said in a statement. “We should choose whether to sit back and accelerate the disaster or fight against the wrong system.” Following the rally, they marched some 5 kilometers from Daehangno to Boshingak Bell. The demonstrations around the globe took place on the eve of a UN climate summit. UN Secretary-General Antonio Guterres called for the meeting to inject urgency into government action to limit global temperature rises to 1.5 degrees Celsius under the 2015 Paris treaty.  President Moon Jae-in is set to join the summit. Korea, the world’s seventh-largest greenhouse gas emitter, still heavily relies on coal-fired power plants and nuclear reactors, which generate about 65 percent of electricity combined as of 2018. The Moon Jae-in administration laid out a road map to raise the proportion of renewables from the current 6.2 percent to 20 percent by 2030  and to phase out coal and nuclear energy, despite strong opposition from businesses and people who fear a hike in electricity bills. But the plan also involves increasing the use of another polluting fossil fuel: gas.

Environmental activists say the plan is not enough, demanding the government declare a “climate crisis” and take bolder actions right now.  “The government turning a blind eye to climate crisis and staying silent on it is pushing citizens and the whole society into a bigger threat,” said Lee Ji-eon, an activist from Korean Federation for Environmental Movement. “People’s actions will continue for the big shift we want in society.  Another demonstration is planned on Friday near Gwanghwamun Square, where some 1,000 students are expected to skip their classes and turn up to join in.