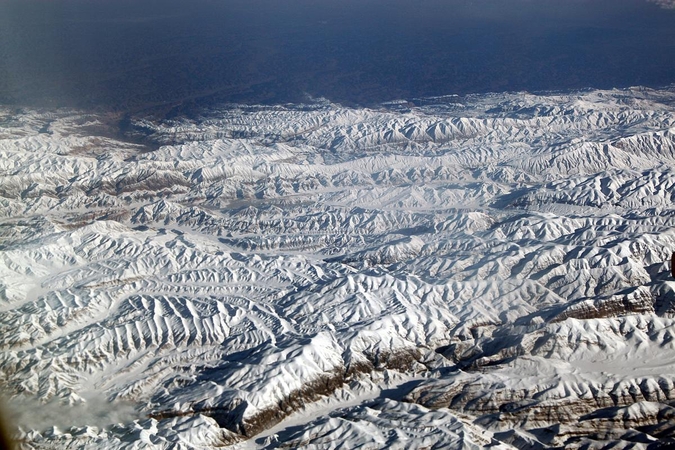 A view of the Hindu Kush mountain range from 35,000 feet. The range divides Central Asia from South Asia. (Photo: iStock)

The report also said that with just 50 cm of sea-level rise, 150 million people would face flooding in port cities around the world.

Bearing the brunt of global warming and climate change, the Hindu Kush Himalayan region, an area covering high mountain ranges of central, south and inner Asia, faces the risk of losing over 60 per cent of its glaciers by the year 2100, a global climate report said on Wednesday.

The special report on oceans and cryosphere in a changing climate, prepared by the Intergovernmental Panel on Climate Change (IPCC), said that glacier retreat and snow cover changes have already contributed to localised declines in agricultural yields in high mountain regions, including the Hindu Kush Himalayas.

The Hindu Kush Himalaya region includes mountain ranges of the Tien Shan, Kun Lun, Pamir, Hindu Kush, Karakoram, Himalayas, and Hengduan and the high-altitude Tibetan Plateau which produce one of the world’s largest renewable supplies of freshwater. It supports 120 million people directly through irrigation systems, and a total of 1.3 billion indirectly through river basins in India, Tibet, China, Nepal, Pakistan, Bangladesh and Afghanistan.

“Hindu Kush Himalayan regions are extremely susceptible to temperature increase. Under a 1.5 degree Celsius global warming scenario, the areas are projected to warm up by more than 2 degrees Celsius on average by the end of this century,” the report said.

The report, approved by over 190 countries, said that currently, more likely climate change scenarios suggest regional temperature increases between 3.5 and 6 degree Celsius by 2100.

“Most of the projections also indicate overall wetter conditions in the future and increases in extreme precipitation events. This will lead to significant losses in glacier volume, from 36 to 64 per cent, depending on the warming scenario, and impact timing of water flows and water availability.

So, the rate of risk is extremely high in present emission scenario,” the report said. According to the report, floods will become more frequent and severe in the mountainous and downstream areas of the Indus, Ganges and Brahmaputra river basins, in Hindu Kush Himalayan region, because of an increase in extreme precipitation events.

“Depending on the climate change scenario, the severity of flood events is expected to more than double towards the end of the century,” it said.

Highlighting the impact of global warming and its implications in water resources in the Hindu Kush Himalayan region, one of the key authors of the report said that it affect water for domestic use, agriculture and hydroelectricity.

“Snow and glacier melt from high mountains helps to sustain the rivers that deliver water resources to downstream populations. Due to global warming and its implications in the water resources in the Hindu Kush Himalayan region, three sectors would be directly affected – water for domestic use, agriculture and hydroelectricity,” said Anjal Prakash, one of the authors of the report.

The report also said that with just 50 cm of sea-level rise, 150 million people would face flooding in port cities around the world. Among the 46 cities at risk due to sea level rise, two are Indian cities of Mumbai and Kolkata, which may experience severe and frequent floods, it said.

Referring to the impact of increasing sea level on Indian cities, he said that Mumbai, the most populous city in India, is threatened by both sea-level rise and increasingly extreme rainfall. “Much of the city is already below sea level at high tide. It is difficult to build walls to protect Mumbai from rising sea levels because the city also needs to be able to drain regular flooding from monsoon rainfall. At the same time Mumbai is continuing to build more coastal developments,” Anjan Prakash said.

The IPCC report, which was approved on September 24 by 195 member countries, will be a crucial scientific input at the 25th Conference of Parties at the United Nations Framework Convention on Climate Change (UNFCCC) at Chile in December this year.