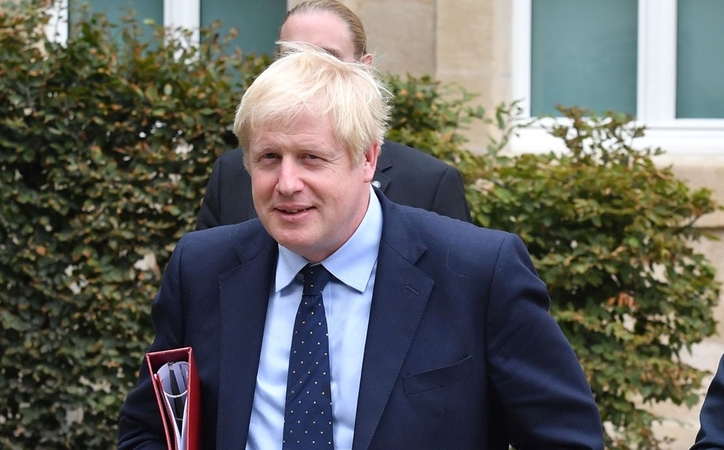 British Prime Minister Boris Johnson bounced onto the stage at the annual Conservative Party conference in Manchester on Wednesday and announced what he said were “constructive and reasonable proposals” for getting a Brexit deal done by the end of October.

He was cheered in the conference hall. But his long-awaited written plan was met with raised eyebrows in Europe and roundly dismissed by opposition lawmakers in Britain.

Johnson did not win any additional support when, hours later, his spokesman announced that the government would seek to suspend -- or “prorogue” -- parliament from October 8 through October 14, when Queen Elizabeth II would come to the chamber to deliver the “Queen’s Speech” and set the stage for a new agenda.

Last month, the Supreme Court ruled that the five-week suspension Johnson had requested was “unlawful”. This break would be far shorter. But it would happen just a few days before Johnson must try to seal a deal with European leaders at an October 17 summit. Lawmakers have been livid about being sidelined by the government while Brexit deadlines loom.

In a letter to European President Jean-Claude Juncker detailing his new proposals on Wednesday, Johnson reiterated his opposition to the Irish “backstop” -- negotiated by his predecessor Theresa May to guarantee an open border on the island of Ireland. Johnson said his government was seeking a more decisive split from the European Union.

“In these circumstances, the proposed ‘backstop’ is a bridge to nowhere, and a new way forward must be found,” he wrote.

In stark contrast to earlier Brexit deals, Johnson’s plan would recreate two borders where there are now none. There would be an EU-UK customs border on the island of Ireland, between the north and south, and a new regulatory border between Northern Ireland and the rest of the United Kingdom.

Previously, such ideas had been anathema to Northern Ireland unionists, who resent any suggestion that their region is distinct.

Johnson’s ideas were not immediately rejected in Brussels or other European capitals, as has at times been the case following British negotiation gambits. Several analysts, though, said the prospect of a breakthrough didn’t look good. Johnson’s plan appears to cross red lines drawn years ago by European negotiators.

Juncker cited “positive advances”, especially the proposal to keep many Northern Ireland regulations aligned with EU standards. But he said that there were “problematic points” related to Britain’s apparent unwillingness to commit to keeping the Irish border fully and permanently open.

“The EU wants a deal,” Juncker said. “We remain united and ready to work 24/7 to make this happen.”

Irish leader Leo Varadkar -- a key voice because of how much his country would be affected -- was sceptical. “The proposals do not fully meet the agreed objectives of the backstop,” he said in a statement after speaking with Johnson.

Raoul Ruparel, who left his post as a UK government adviser last week, tweeted that the offer would require “big concessions” from the EU and Ireland, which he said were unlikely. “I suspect they would rather gamble on an extension and election,” he said.

Even if a version of this plan were accepted by EU leaders, it would be difficult for Johnson to win passage of the deal in a bitterly divided British Parliament.

Jeremy Corbyn, the leader of the opposition Labour Party, called Johnson’s plan “worse than Theresa May’s deal -- I can’t see it getting the support that he thinks that it will get”. Corbyn said he was especially concerned about the potential to “undermine the Good Friday agreement”.

Johnson’s proposal envisions major changes to how life is lived on the island of Ireland, where an invisible border and frictionless trade would give way to a complicated and potentially cumbersome effort to track the flow of goods across a newly relevant border.

Johnson is insisting that Northern Ireland should leave the EU customs union along with the rest of the UK, meaning there would need to be some sort of customs checks.

The EU has resisted such checks on the grounds that they could jeopardise the delicate peace established by the 1998 Good Friday agreement and become a target for renewed sectarian violence.

And if the UK diverged from the EU on taxes and tariffs, as it almost certainly would, it could open a door to smuggling across the border -- a major fear of EU governments and businesses.

Johnson told the Conservative Party faithful that “under no circumstances” would there be “checks at or near the border in Northern Ireland”.

But his written plan was vague on how and where checks would happen, saying they “should take place on a decentralised basis, with paperwork conducted electronically as goods move between the two countries, and with the very small number of physical checks needed conducted at traders’ premises or other points on the supply chain”.

Johnson further proposed that the Northern Ireland assembly be able to vote every four years on whether to continue the arrangement. Northern Ireland has been without a government for years, though. And Johnson’s plan does not say what happens to that border if Northern Ireland opts out.

In his speech to his fellow Tories, Johnson said the protracted Brexit debate was foiling the country’s ambition. He compared Britain to “a world-class athlete with a pebble in his shoe”.

He blamed fractious lawmakers. “If Parliament were a computer, the screen would be stuck on the pizza wheel of doom,” Johnson said. “If Parliament were a reality TV show the whole lot of us, I’m afraid, would have been voted out of the jungle by now. But at least we could have watched the Speaker being forced to eat a kangaroo testicle.”

“That is why we are coming out of the EU on October 31 come what may,” Johnson said, warning his European counterparts that Britain “was ready” to leave without a deal.

And yet, a bill passed by Parliament last month requires Johnson to seek a three-month delay of Brexit unless a deal is struck by October 19. Johnson has said that Britain will leave the bloc by the Halloween deadline and that he will obey the law, prompting many to wonder whether he is seeking a loophole.