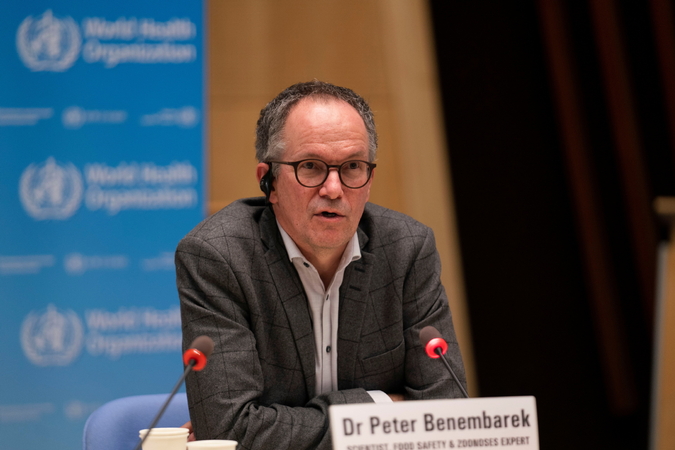 WHO: Animal-to-human virus transmission most likely

The virus that caused the COVID-19 pandemic is "extremely unlikely" to have originated in a lab, but most likely jumped from an animal to humans, according to a World Health Organization report released on Tuesday by a joint international and Chinese team probing the virus' origins.

The 120-page report said the virus most probably jumped from an animal, potentially a bat or pangolin, to an unknown intermediate animal host and then to humans. However, the path of transmission is still not known.

"There is no record of viruses closely related to SARS-CoV-2 in any laboratory before December 2019, or genomes that in combination could provide a SARS-CoV-2 genome," the report said.

"In view of the above, a laboratory origin of the pandemic was considered to be extremely unlikely."

The report said that the two most likely scenarios to explain the emergence of COVID-19 both involve the transmission of the virus from animals to humans.

"So far, we have not been able to document any substantial transmission of SARS coronavirus in the months preceding the outbreak in December," Thea Fisher, a member of the international team, said at a news conference on the report on Tuesday.

"We try to stay with the arguments we have, the hard facts we have," he said.

He called it "a huge report" with a lot of new knowledge, data and information, and added that information will continue to come out after the initial studies.

He also praised the good collaboration between the Chinese and international experts.

"I think the size of the report, and the amount of material and results and analysis and data in the report, speaks for itself in terms of how the collaboration went," he said.

"There would never be anything like that if we did not have a very strong, good collaboration with our colleagues in China," Embarek added.

The report was written by a joint international team made up of 17 international experts and 17 Chinese experts under a mandate from the World Health Assembly, the decision-making body of the WHO. The United Nations Food and Agriculture Organization participated as an observer.

The team conducted a joint study from Jan 14 to Feb 10 in Wuhan, Hubei province, following initial online meetings, according to the report.

Peter Daszak, a member of the international team, tweeted, "I do hope people actually read the huge amount of new data in the report!"