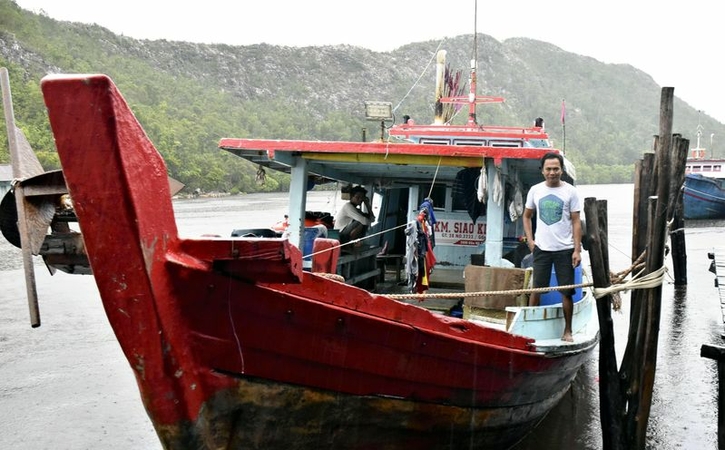 A fisherman stands on his boat on Great Natuna Island, Indonesia, on March 22. (The Yomiuri Shimbun)

GREAT NATUNA ISLAND, Indonesia — At the southern tip of the South China Sea on Indonesia’s Natuna Islands, there is a growing sense of alarm over China’s claim to maritime rights in the seas surrounding the isles.

In February, Beijing enforced a law that allows the China Coast Guard to use weapons, prompting concerns among local fishermen over whether they will be able to continue operating safely in the area.

“Intimidation by Chinese vessels in the area occurs repeatedly. The danger is growing, but we need to fish for our families,” said the 34-year-old skipper of a long line-fishing boat on Great Natuna Island, the largest isle in the Natuna chain.

The area is a rich fishing ground for swordfish and octopus, and is also believed to have natural gas reserves.

Locals say Chinese vessels accompanied by China Coast Guard ships have been operating with impunity and have even rammed the wooden boats of local fishermen.

“When we see a [Chinese] Coast Guard vessel, we have no choice but to flee. How can a country so far away act as if it owns the area?” the skipper said.

The waters surrounding the archipelago are within the so-called “nine-dash line,” a unilaterally drawn territorial demarcation China uses to show its claims in the South China Sea. In January last year, about 50 Chinese fishing boats operated inside Indonesia’s exclusive economic zone (EEZ) near the islands.

In response to the situation, Indonesian President Joko Widodo ordered the defense ministry to conduct patrols with warships and fighter jets. The Indonesian government sent a letter to the United Nations in May stating that China’s nine-dash line lacks a basis in international laws.

With the enforcement of the coast guard law, threats from China will inevitably increase further.

The wreckage of a Chinese fishing boat that was captured and blown up by the Indonesian government in 2016 remains in a harbor on Great Natuna Island. According to local sources, there are plans to preserve wreckage and it is likely to become a symbol of resistance against China.

The Natuna archipelago has a total population of about 80,000 people and is dotted with fishing villages. Last year, part of the archipelago was used by the Indonesian government as a temporary quarantine site for Indonesian nationals who had returned from Wuhan, China, aboard chartered planes.

Japan has provided economic assistance for the construction of piers where large fishing vessels can dock, refrigeration facilities and a market. The economic assistance totals ¥830 million, according to the Indonesian government, and the aim is to establish a fisheries zone free of Chinese influence.

Japanese and Indonesian foreign and defense ministers also agreed to promote developments in remote islands at a meeting in Tokyo on March 30.

“In the future, we would like to start market auctions like those in Japan,” said the head of a fishing port on Great Natuna Island.