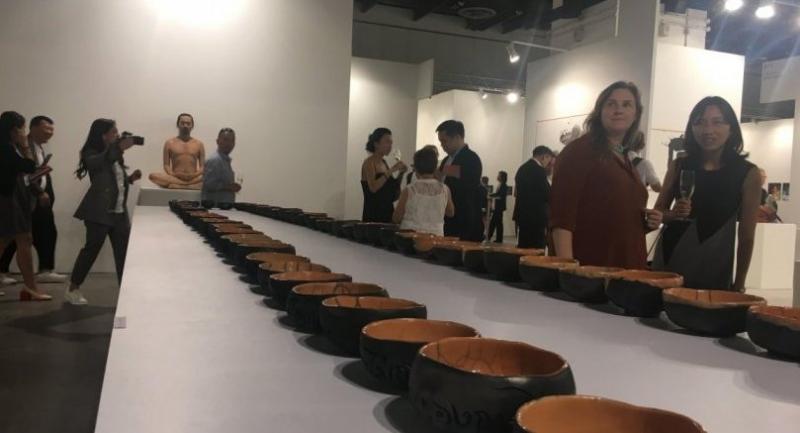 Of the 83 galleries presented from around the globe, seven galleries from Thailand, along with three galleries plus one collector in Singapore, presented 15 Thai artists at the three-day fair.

Under its geographical interaction, Art Stage Singapore 2018 remained committed in focusing its engagement on Southeast Asia and this year featured a special focus on the new and vibrant art scene flourishing in the region – Thailand. Along with these superstars, five galleries introduced 10 emerging artists. For the first time, Nova Contemporary showed an interactive conceptual photography installation, “The Shads Would Shatter at Touch” by Tada Hengsapkul whose his work was sold at the fair. A newly opened gallery named I Project presented Pornprasert Yamazaki’s new installation, “Fountain”.

Presented by Whitespace Gallery Bangkok, Maitree Siriboon returned to the fair with his new installation, “The Money Tree Project 2018”.

Manit Sriwanichapoom’s 2007 installation “Pink Men vs Pink Buddha” is also highlighted at the fair as part of a grand selling exhibition of Asian contemporary works from the Tiroche DeLeon Collection.

Represented by Singapore’s Art Season, a stunning series of fibreglass sculptures of Buddha Statues with Lego heads by Komkrit Thepthien also drew the attention of many collectors. Art Stage Singapore started in 2011 as a flagship art fair for Southeast Asia established by Swiss national Rudolf, who used to be director of Art Basel in the mid-1990s.

Aiming to make Singapore the Southeast Asian art hub, Rudolf and his team have brought more than 500 galleries to the Singapore fair since 2011, but the participating galleries decline yearly citing poor sales. Last year saw 131 galleries participate, while this year the attendance was trimmed down to 83 galleries. Behind Hong Kong, the Singapore art market is smaller and this year’s fair was the smallest.

“The art market in Singapore is weaker, as less collectors buy art. But we hope this year’s highlights, including the vibrant Thai art market, masterpieces by American artist Alexander Calder and a special exhibition by Colombia figurative artist and sculptor Fernado Botero will capitalise the market,” said Rudolf, who also runs Art Stage Jakarta.

“We still keep running Art Stage in Singapore and need to make the fair sustainable and turn Singapore into the art hub of Southeast Asia,” he hoped.

Surely, the fair and Festival benefit the Thai art market and art scene.

“Thai artists are exhibited and known in a greater sphere of the art context, but in an art fair context, I think it will widen the collecting base for Thai art and artists,” said Rirkrit.

“There is a great wealth of collectors in Southeast Asia, and the exposure of a Thai art programme certainly could be beneficial. On the other hand, the Ministry of Culture in Thailand, should take note of how Singapore and its government has been supporting and promoting art and culture, with first Singapore Art Museum (and its great collection of SEAsian artists), and the newly opened National Gallery, as well as Art Stage.

Singapore’s government also gave grants to Singaporean based galleries to apply and exhibit in art fairs around the globe. The Thailand ministry should consider such a support, as galleries are the infrastructure for the cultivation of artists and their art,” said Rirkrit, who is an adviser to the Bangkok Art Biennale opening in Bangkok in October.