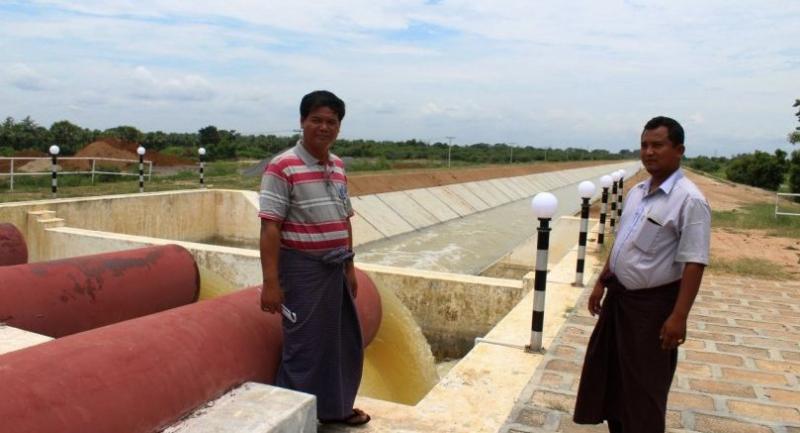 Farmers living in the central dry zone will no longer have to fight for water thanks to a pilot project funded by Livelihoods and Food Security Trust Fund (LIFT), International Water Management Institute (IWMI) and other partners, officials said.

Mya Than, assistant director and chief of Sagaing district at Myanmar’s Irrigation and Water Utilisation Management Division (IWUMD), said the Pywat Ywar irrigation projฌect near Myinmu should become a role model for all irrigation projects in the country’s dry zone. He said it would help change the lives of locals by improving water management and helping them grow suitable crops.

“We should apply this model to the other 300 irrigation projects in the dry zone. Now many villagers in this area know how to use water more efficiently and there will no longer be disputes over the allocation of water in the near future,” he said.

The project encourages active participation by farmers and gets them to work with government officials in managing water allocation and enhancing the performance of the scheme.

This project will be overseen by three committees, which – combined with government officials and key stakeholders – will form the Water User Association, he explained.

The government initially started the 2,023hectare project in 2004, and has been irrigating farms since 2006.

So far, more than US$2 million (Bt66.72 million) has been spent on the project. However, the United Nations Office for Project Services (UNOPS), LIFT and other nongovฌernmental organisations plan to inject another $5 million into the project, with a focus on saving farms and food, the official said.

The project will benefit 1,258 households from five villages in Sagaing region, and should cut down conflicts, inequality, electricity wastage and inefficient use of water, he said. Mya Than added that the project will also enhance food secuฌrity, nutrition, crop diversity and the agriculture industry.

With the project, farmers are now becoming aware of the importance of water management, Lwin Oo, scheme manager and assistant engiฌneer at IWUMD, said.

“Previously, a lot of water was lost. Irrigation staff and farmers had limited capacity for operating and maintaining waterpumping facilities,” he added.

Though the project will be wrapped up by March next year, the IWUMD official said the scheme could be extended.

“Empowering communities usually takes time. I hope the project is extended for another two years, so everybody can get used to this model,” he said. Conflicts took place prior to the project, Petra Schmitter, a researcher with IWMI, said, “because everybody was trying to take the water. Nothing was organised and nobody wanted to coordinate with the irrigation department.”

“The most important thing is to create a link between farmers – those who are using water, and the engiฌneers who are designing the irrigation systems. We help create a good institutional structure designed by the farmers and government institutions,” she said.

Local people also have a chance to set their own rules and regulations, including the penalty for breaking them, she said. “We have repaired many of the watercourses and trained farmers in proper maintenance and operation. Rehabilitation will continue through the remainder of the project until all the sites have been assessed.”

Welt Hunger Hilfe has trained hundreds of farmers to boost their output, which has resulted in the cultivation of new, highvalue crops such as chilli, bitter gourd, chickpea, sunflower and papaya, Schmitter said.

“If we want to strengthen the econฌomy in the dry zone, we need good agriculture production management starting with an effective water management system,” she said. “For that, we have repaired the canals and put the structure in place. When we leave, we hope the farmers and the Irrigation Department can keep it going.”