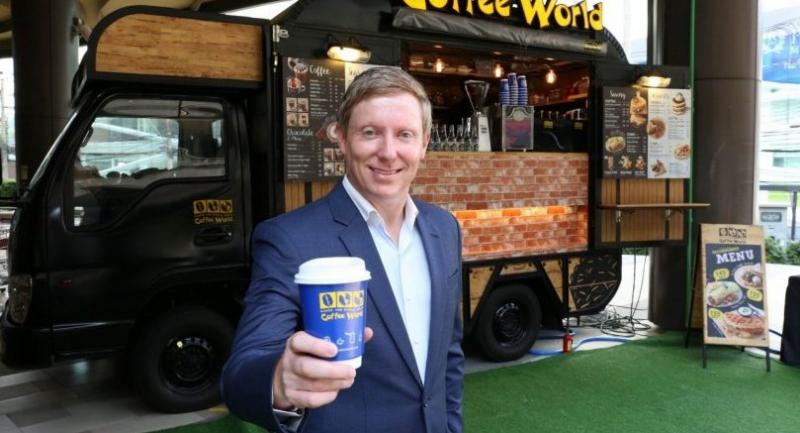 COFFEE WORLD has announced that it plans to double the number of its coffee houses in Thailand over the next five years to about 175.

The company currently operates about 90 coffee houses domestically, half of them through franchising.

Darren White, managing director of GFA Corporation (Thailand) Co, the owner and franchiser of Coffee World, said the company had franchised its coffee houses in Laos, Malaysia, Bangladesh, China, Bahrain and India, and was expanding in both existing and new markets. These include Cambodia, Malaysia, Singapore, and Middle Eastern markets such as the United Arab Emirates.

The company yesterday also announced the launch of Coffee World Truck, a mobile-cafe business. The food and beverage franchiser has come up with new menus exclusively for Coffee World Truck, ready to expand its sale channels through trade fairs. This should help Coffee World increase its profit by 10 per cent this year.

“We plan to open between two and three Coffee World Truck outlets in the second half of this year,” White said.

“We think we have an opportunity [to do business outside] of Bangkok, especially in tourist cities such as Pattaya, Chiang Mai and Hua Hin.

“Last week, we just opened a Coffee World restaurant in Malaysia,” he said, adding that there was an opportunity to open Coffee World Truck outlets there as well.

White said the company would start considering franchise options for the new mobile units to potential franchisees both in Thailand and other markets abroad. The concept of Coffee World Truck is moving around every month into new locations.

“Coffee World Truck also offers exclusive new menus to make our cafe on wheels unique and different from the others in the market,” he said.

“The lifestyle of the new generations has changed, especially in the urban setting. Coffee World Truck caters to the modern lifestyles of our customers by serving freshly brewed coffee wherever they are, at night markets and various events, to name a few.

“I think that the market for mobile cafes will expand in the next three to five years in Thailand and worldwide. It is expected that the competition will become fiercer.”

White said the cafe market in Thailand was highly competitive, and valued at about Bt10 billion. Newcomers include international and independent brands. However, he believes that only strong brands will survive long-term.

In preparation for business competition, Coffee World says it has paid attention to online media, and has constantly developed and presented new menus, while maintaining the quality of its products and services.

To create good experiences for its customers, Coffee World says its stores feature new designs and interior decorations to create a stress-free atmosphere where customers can work and mingle.

This year, Coffee World plans to add 15 branches, 12 of which are franchised and the rest managed by the company.

White said the coffee-house market in Thailand was extremely competitive, but the company still sees opportunities to expand.

“We believe the larger brands will continue to grow, driven by the change of customer demographics. Their lifestyle has also changed in flavour to co-working space in the coffee houses. However, with intense competition, small brands may exit the market,” he said.