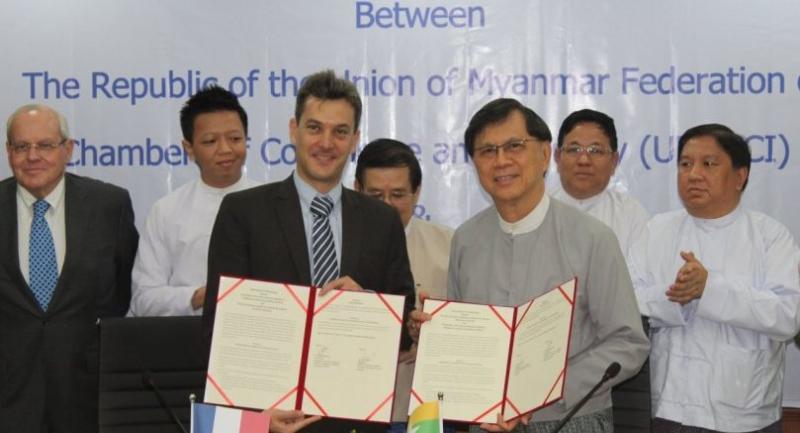 Though investment by French firms in Myanmar has accounted for less than 1 per cent of the total forฌeign direct investment, the figures are likely to surge over the next few years as the Union of Myanmar Federation of Chamber of Commerce and Industry on Friday signed a memorandum of understanding (MOU) with CCI French Myanmar.

Julien Esch, president of CCI French Myanmar, said that the MOU paved the way for how the chambers should work together to strengthen ties between Myanmar and France.

“We are excited about the future of Myanmar. We expect to see improvements in a wide range of sectors as well as our activities in Myanmar. The relationship between Myanmar and France is very strong, and we are eager to cooperate together,” he said.

Esch considers infrastructure, hospitality and tourism, oil and gas, electricity and energy, construction, healthcare and food production as the “most promising areas” for bilateral cooperation. .

“Myanmar has a lot of opportuniฌties and the people here are hardworking. It is very important that regulations are clear. What is more important is to maintain the (growth) momentum and to find acceptable solutions for the issues you are facing,” he said.

According to Esch, clear rules and efforts to simplify the process of doing business will lead Myanmar to becoming an investment hub in Asean. He noted there were a lot of things to be done in Myanmar in spite of positive developments under the National League for Democracy govฌernment.

In an effort to support French companies which are interested to enter Myanmar, CCI France Myanmar has been sharing its knowledge and business contacts through its office in Yangon since the past few years. It also organises French business delegations to major cities in Myanmar and conduct a lot of training. Next week, a French business delegation will visit Mandalay to discuss with the business community in Upper Myanmar.

Esch said the joint chamber now has a team of seven fulltime employees and 135 members which are French and Myanmar companies. He expects the membership to keep growing yearly.

According to the Directorate of Investment and Company Administration, six French firms have been approved to bring in the capital of US$542.4 million, ranking France 12th among 49 investor counฌtries in Myanmar. Yet, Esch claimed about the statistics as French comฌpanies has been doing business in the country since its period of isolation under the military junta.

“The figures are to be checked carefully. A lot of French businesses are using their Asian subsidiaries to enter into the Myanmar market because the market was difficult and faraway from France. So a lot of French companies use their subsidiaries in Thailand, Singapore and Hong Kong to invest in Myanmar. Sometimes, the figures you see from DICA are not reflecting exactly,” he said.

Zaw Min Win, president of UMFCCI, was also delighted to sign the pact.

“There are vast opportunities for increasing bilateral economic coopฌeration and both sides need to coopฌerate more intensely to further promote bilateral trade and investment. I am sure that the MOU signed today will be instrumental in achieving this goal,” he said.

He believes that France can help Myanmar a great deal with its efforts to develop industrially, as it is a highly-developed country in terms of technology and economy.

Zaw Min Win invites French investors to participate in the nation’s new economic era through responsible investments and share benefits on a winwin basis. He is confident that the enactment of Special Economic Zone Law, the establishment of three SEZs and the enactment of Myanmar investment Law will attract French businesses to come to Myanmar.

“Myanmar is rich in natural resources of fertile land and water. We are also blessed with highly valuable gems such as the famous Myanmar rubies, jade and other gems, gold, silver, copper, tin, and a wide variety of minerals. We possess the ninth largest oil and natural gas resources in the world. But due to lack of a well-developed industrial base, we have depended heavily on income obtained from the export of primary agricultural, forest, mine products and others,” he said.