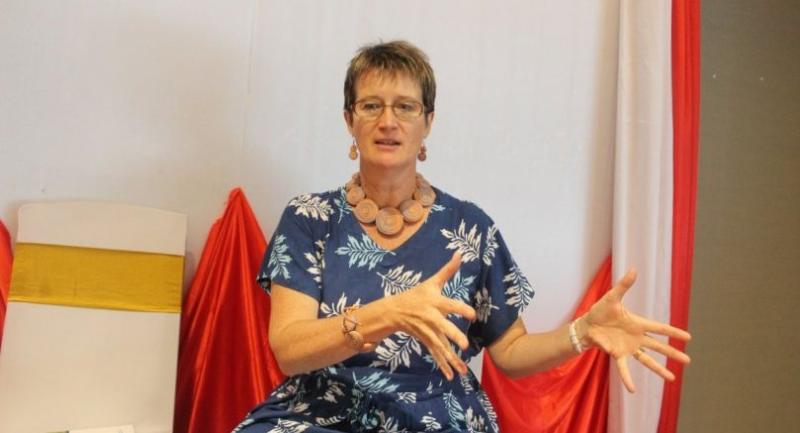 Vicky Bowman, director of Myanmar Centre for Responsible Business, at is interviewed at the Novotel Hotel Max in Yangon.--Myanmar Eleven

MYANMAR’S aim to become Asia’s last frontier may not be realised if the government fails to urgently address the challenges it faces in promoting responsible businesses, according to Vicky Bowman, director of Myanmar Centre for Responsible Business.

Bowman said in an interview Myanmar government must build up its capacity to prioritise on benefit sharing across the nation, as decision-making and management play a crucial role in maintaining the growth momentum.

“Two things are critical to Myanmar’s growth. One is money and another is skills and knowledge, which Myanmar is still lacking,” she said.

According to Bowman, Myanmar urgently needs to tackle three key challenges – poor regulation and lack of government capacity to enforce it, legacy issues, and mistrust in the peace process.

“The problem is when you have a regulation which is full of hopes but inconsistent or not being enforced, then companies will do bad things. The government needs to enforce standards to a certain level by enforcement of regulations, particularly on core issues like waste and labour,” she said.

Bowman considers transparency, effective law making and law enforcement and inviting public comments before a project is implemented as the keys to rapid improvement.

“It should be much more |systematic when it comes to reviewing laws. Responsible business and government regulations are correlated. Legacy problems still have to be solved out. For example, land grabs and other conflicts are really big issues which the government has to prioritise.

“Trust building is also important, and government officials should think carefully about how to engage with ethnic people. Ethnic armed groups’ understanding of business regulations and standards is also vital. Many people have mistrust on the investors because of land issues.

“What we want to see is the decision making, inspection and enforcement of benefits being shared at the right level. It does not make sense, if environmental protection in Kayin State, for example, is lower than Shan State. Benefits should be much more at the local level,” she said.

Bowman stressed the im-portance of training govern-ment staff. In this regard, MCRB recently conducted a series of workshops to train staff of |the Directorate of Invest-|ment and Company Adminis-tration on international standards for responsible business.

The organisation also plans to offer similar training for regional authorities and line ministries such as mining, construction, forestry and environmental conservation, following the roll-out of the new Myanmar Investment Law and Rules.

Established in 2013, with the funds of six European governments – the United Kingdom, Denmark, Norway, Switzerland, the Netherlands and Ireland – MCRB works with the government, foreign and local companies, civil society organisations and the media to build understanding of what international standards are and how Myanmar laws and regulations can be adapted to meet those standards.

“At that time, there was no exact legal framework. Now with the new Myanmar Investment Law, it is much more explicit that Myanmar is going to look at companies’ track records of how they are responsible. Now our training becomes more relevant and critical,” she said.

“Whenever I train government staff, I always a question on which company is responsible in Myanmar, and they are always silent. So I think there is a lot of mistrust on companies here.

“We do not think that a responsible company is the one that makes a lot of donations. Sometimes, donation becomes [a company’s] mechanism to cover up bad behaviour. How they can create share values and good things for the society is more important. We try to switch their mentality to focus not only on making profit but also on creating more jobs for local people who do not have high level of education,” she added.