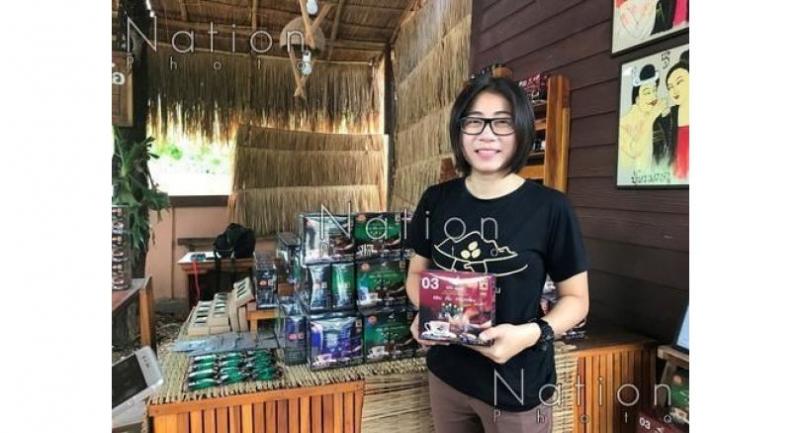 SINCE INVESTING Bt400,000 to set up Nan Duo Coffee Limited Partnership nine years ago, Watcharee Promthong has built up the company in Nan province to the point where it generated sales value of Bt10 million last year, and targets Bt30 million this year.

“We plan to invest Bt7 million this year to double our coffee-bean production capacity … and boost our sales by 200 per cent compared with last year,” she said.

Watcharee, 38, decided to resign from her job as manager of a coffee company in Bangkok nine years ago and invested her savings of Bt400,000 to set up a small plant to produce roasted coffee beans under the Phu Coffee brand to distribute in wholesale markets in Pattaya at the end of 2007.

“We saw a business opportunity as Thai people were switching from instant to fresh coffee at that time,” she said.

Three months after establishing her business, she began distributing her products at 20 wholesale outlets in Pattaya and Chon Buri province, generating average income of Bt60,000 a month.

“Our savings of only Bt400,000 were not enough for our business expansion because we had to provide credit lines for our wholesale customers of an average of one month. As a result, my mother had to sell 5 rai of her rice plantation in Nan province to provide Bt4 million for me to expand my business,” Watcharee said.

She added that when she started the business, she could not get a loan from the commercial banks, so she had to ask her mother to support her business.

However, she promised her mother that she would buy more land for her later.

This is the challenge for her, to grow her business so she can keep that promise, she said.

After her initial success distributing Phu Coffee in the Eastern region of Thailand, Watcharee decided to move her business to her mother’s land in the north of Thailand, in Nan province, and also to expand the business by collaborating with coffee farmers there.

From 20 farmers in 2010, she has expanded her coffee- grower network to 850 farmers on 2,500 rai in Nan province this year. This generates average income of Bt40,000 a month per farmer family.

Watcharee said the key to the success of her products, which include roasted coffee beans, three-in-one instant coffee, and raw coffee beans, is their quality. She also provides good benefits for the company’s wholesale |customers by offering one free package for every 10-package order.

“Now I can afford to buy up to 50 rai of land for my mother. It will not be the same land that she sold nine years ago, but I can do what I promised and will buy land for her when I see the opportunity to do so,” she said.