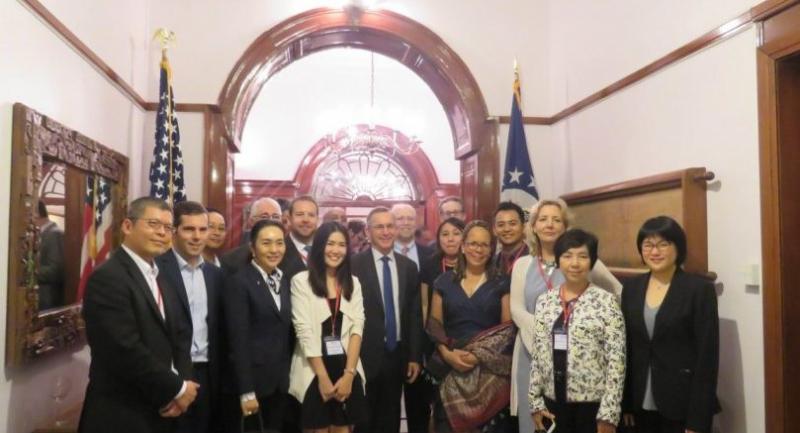 US investment in Myanmar may double by 2020

INVESTMENT by American companies in Myanmar could be double in three years thanks to the government’s efforts to boost bilateral economic ties, said Aung Naing Oo, director general at the Directorate of Investment and Company Administration and secretary of Myanmar Investment Commission.

“We are in active discussions with Amcham Myanmar [American Chamber of Commerce in Myanmar] to facilitate trade and investment with the United States. We do hope the entry of US insurance companies in the near future, which will lead to millions of dollars surge in our list of FDI [foreign direct investment],” he said in an interview.
To date, Myanmar has approved nearly US$250 million (Bt8.4 bilion) investment by American companies. A total of 130 US firms are among 65,000 registered firms in Myanmar, he said.
“A potential surge in US investment would depend on how fast American insurance companies arrive here and how many bidding the Ministry of Energy will open for its new blocks. If things go as planned, it is not that difficult to welcome about $500 million US investment in three years,” he said.
According to the official, oil and gas, insurance and information technology are top three sectors to receive a large sum of US investment. He also considers gems and jewellery as another promising sector if all the sanctions and limitations are lifted by the US government.
He said Myanmar was similar to Vietnam when it came to attracting US investment. Yet, he believes it will take less time for Myanmar to catch up with the US investment that Vietnam has received.
“Vietnam also had around $250 million US investment in 1990s, when the sanctions imposed on them were lifted.
In a decade, the US investment in Vietnam reached to nearly $2 billion. Now we are in a similar situation. But I hope it does not take much time to attract Amercian investors,” he said.

New panel
He said the recent establishment of Myanmar Investment Support Committee chaired by a commerce boss would help promote the interest of foreign firms including those from the US. The committee aims to address investors’ concerns and difficulties.
Aung Naing Oo said the growth of American investment in Myanmar would largely depend on the US government’s policy.
In a bid to encourage US banks and financial institutions to enter the Myanmar market, Amcham Myanmar recently led a financial services business delegation to Yangon and Nay Pyi Taw consisting of 13 companies to meet with government representatives and local banks on July 24-26.
The mission aimed to help US financial institutions, including banks and insurance companies, get a better understanding of the local market and opportunities.
Judy Benn, executive director of Amcham Myanmar, said the delegation also met with US Ambassador Scot Marciel and embassy officials, urging the US government to remove Myanmar from the enhanced due diligence requirements of Sections 311 and 312 of the USA Patriot Act which inhibit US financial institutions from doing business in Myanmar.
Currently, no US banking institution can provide trade financing to Myanmar, finance direct investment in the country, or repatriate US investors’ funds to the US due to the stringent due diligent requirements imposed by the US government.
“This seriously impacts US companies’ ability to do business with Myanmar, specifically including exports to that country, investment in the country, and participation in the economy on equal footing to other foreign companies,” she said.
She said a healthy economic environment that is free of prohibitive and discriminatory regulations would encourage diversity and innovation, and allow companies to compete under fair conditions.
“We will continue to work with the Myanmar and US governments toward building an economy that stimulates growth and that is attractive and welcoming to foreign investors,” she said.
The delegation urged Myanmar officials to continue reforms that would allow foreign insurance companies access to the nation’s insurance market and ensure a level playing field for all.