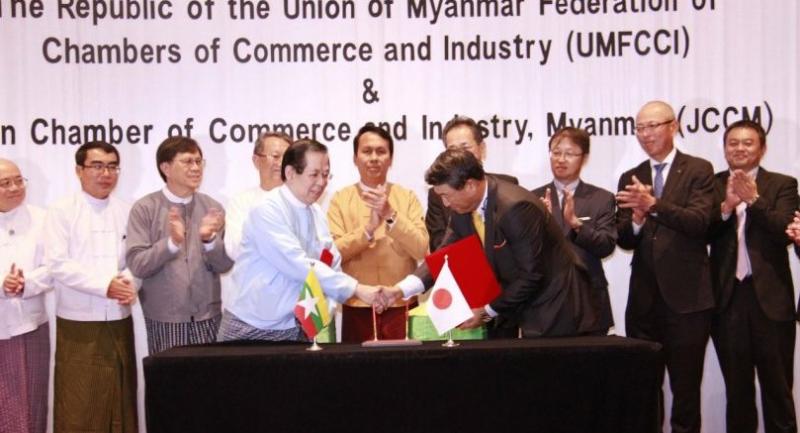 Zaw Min Win, left, president of UMFCCI, and Nakagawa at the signing ceremony.

Myanmar business figures have hailed an agreement with Japan that paves the way for a big increase in trade and investment flows between the two countries.

Japan ranks as just the 10th biggest investor in the country, accounting for only 1 per cent of the aggregate foreign direct investment inflows.

“Now our dream has come true. This MoU clearly states that we are eager to cooperate with Myanmar businesses for mutual benefits. We will discuss further details about our cooperation with UMFCCI in the near future,” said Katsuji Nakagawa, president of JCCM.

Nakagawa said the recent international reports on conflicts in Rakhine State could not fade away Japanese businesses’ attitude towards Myanmar.

“Our interest will go on, and we will continue investing here. We will ensure every possible effort to help Japanese businesses do business here,” he said.

Nakagawa considers electricity and infrastructure projects as the priority areas of Japanese firms eyeing to invest in the nation. He believes the agreement will lead to a business environment for both parties, as it will help foster Japanese investments and technical transfer.

At the event, Japanese ambassador Tateshi Higuchi hailed the agreement as a “tangible illustration of Japan’s full engagement”.

He said the Japanese private sector has been fostering engagement with Myanmar businesses in the past few years. He stressed the importance of Myanmar-Japan joint initiative and the implementation of Myanmar-Japan Centre for strengthening bilateral ties.

The envoy said Japan would contribute 800 billion yens to help improve urban development in Yangon as well as transportation and electricity infrastructure development across the nation.

Higuchi expects to see the Japanese government’s high-ranking official visit to Myanmar in the weeks to come. He said the two countries could closely cooperate in various projects on public-private partnership scheme.

“I strongly believe the year 2018 tends to be the light of dawn for Myanmar,” he said.

“After signing this MoU, we believe we will see significant development in bilateral trade and investment, particularly in infrastructure projects such as electricity supply and transport as well as agriculture, industry, services sectors. We expect more Japanese investments in the near future,” he said.

According to the chamber’s head, bilateral trade has increased two-fold, driven by government-to-government and business-to-business cooperation. To him, Thilawa special economic zone sets a good example for foreign investors.

“From 1995 to 2017, we have signed 15 MoUs of cooperation with various Japanese chambers and specialised regional business organisations. This signing ceremony today will be another important milestone for cooperation between Myanmar and Japanese business communities,” he said.

Maung Maung Lay, vice president of UMFCCI, said the chamber would create a lot of rooms for improvement in a bid to foster cooperation in all sectors.

“Myanmar is still a critical hub for foreign businesses. Our country is like a virgin who has been surrounded by a large number of men who love to propose her,” he said.

Phyo Min Thein, prime minister of the Yangon region government, said the MoU signing would be the first step to foster bilateral relations, particularly in Yangon where most of the bilateral activities are held.