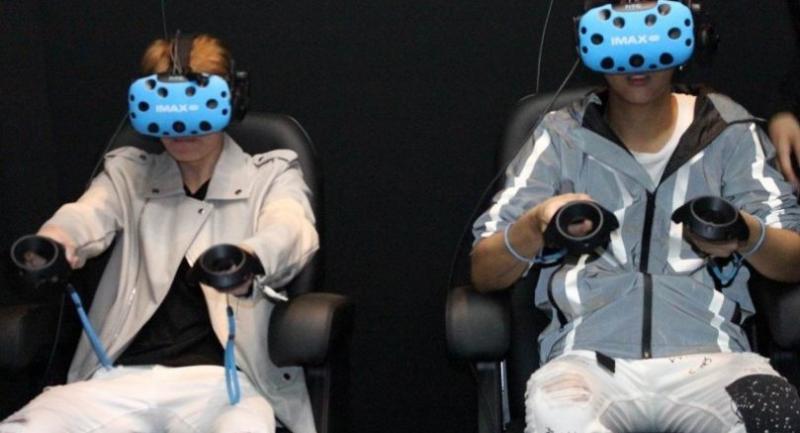 BANGKOK IMAX Theater Co Ltd, a subsidiary of Major Cineplex Group and the licensed operator of IMAX theatres in Thailand, yesterday opened the IMAX VR centre in Bangkok as the first such virtual reality (VR) centre in Southeast Asia.

The company collaborated with IMAX Corporation and Advanced Info Service (AIS) on the centre, which became the seventh of its kind in the world.
With screening beginning today at Paragon Cineplex, the virtual reality centre has been launched to “meet the demand of the digital generation who love new exciting technologies with exclusive content”, the company said.
The IMAX VR features what the company calls premium technology and world-class content that lets users see, feel, move and play in new worlds in an immersive and realistic way, much like IMAX cinemas offer moviegoers a differentiated film experience.
Equipped with VR headset technology, 360-degree sound and sophisticated room tracking, players will be instantly transported into new virtual worlds that are more realistic than anything imaginable. IMAX VR leverages industry-leading VR headsets for its performance – including the StarVR, HTC Vive and Oculus.
The IMAX VR centre consists of eight pods, designed and optimised for virtualised environments and be able to adapt to the experience of each content. It is available for single- and multi-user.
Of special interest is Glostation, pod 3, a new hyper reality escape room VR experience that allows up to four players at a time to compete as a unit with free-roam mobility.
“Being a leader in the lifestyle entertainment business, we are constantly developing and bringing new cinema innovations to Thailand,” said Vicha Poolvaraluk, chairman of Major Cineplex Group. “We want customers to experience the new and modern entertainment continuously, including IMAX, 4DX, Screen X, Projector Laser for sound system and image, and LED Cinema Screen is coming soon at Paragon Cineplex.”
The primary target groups of IMAX VR are those interested in innovative technology such as teenagers, first jobbers and tourists. Other than that, the increasing number of gamers are also eyed.
“The IMAX theatre is widely recognised for its sound system and large screen. Nowadays, technology keeps developing including virtual reality. IMAX, best known as a pioneer of immersive, high-fidelity movies, is pushing into virtual reality in the name of ‘IMAX VR,” said John M Schreiner, senior vice president of IMAX Corporation.
Schreiner said that the potential of IMAX in Southeast Asia is very strong.
“There are markets, which are under penetrated, not only from an IMAX perspective but from a movie going perspective. Countries like Vietnam, Philippines, Cambodia and Indonesia are the market that I expected to see growth in the coming years,” he said.
“Our goal  for the next three years remains the same in terms of global expansion. We are now operating in 75 countries, installing more than a hundred new theatres a year. We continue to grow at a fast pace.  In Southeast Asia, the market are very active right now in places such as  Singapore, and we are expanding with Major in Cambodia, and expect  to have more IMAX theatres in Vietnam and the Philippines, and possibly in Indonesia. There are lot of opportunites in the region,” added Schreiner.
He said that the outstanding point of IMAX VR is its content. John Wick Chronicles and Justice League are two of the offerings that have been specially made for IMAX VR.
“IMAX gives a priority to its content and they are working with many content developers including distributors and studios from Hollywood to create the high quality VR experience at their centre around the world. IMAX VR AIS at Paragon Cineplex will be providing new interactive experiences for players, with each experience lasting around seven to 30 minutes,” he said. IMAX spends more than US$50 million to keep developing the VR content.
The company said IMAX aims to stimulate the VR industry by developing VR content with high quality, with up to 25 content offerings planned within three years. Computer manufacturer Acer is also an investor.
IMAX also plans to develop a 360-degree camera with movie quality for VR images, this project is under development with Google.
Funding for the project will come from Acer, a  major player in the computer industry. IMAX is also developing  a 360-degree camera with the same quality as cinema movies for VR images in collaboration with Google.

Pratthana Leelapanang, chief consumer business officer of AIS, said the company is focused on all aspect of technological developments.