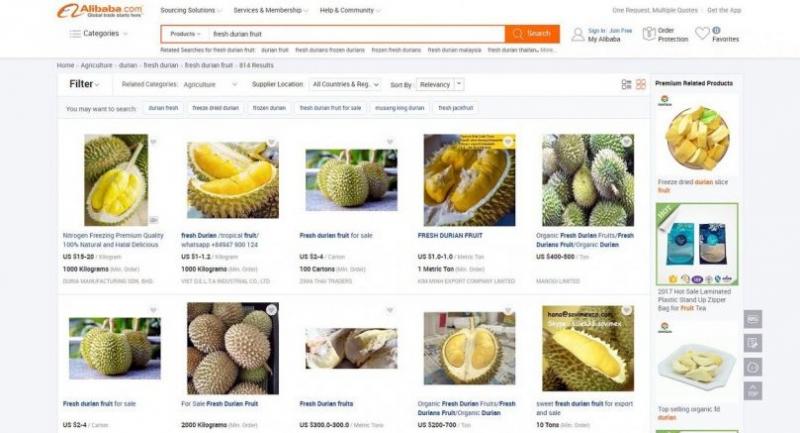 THAI DURIAN sold like hot cakes after Jack Ma showed the magic of e-commerce during his visit to Thailand by selling 80,000 golden pillow durians on his online platform T-mall within one minute.

THAI DURIAN sold like hot cakes after Jack Ma showed the magic of e-commerce during his visit to Thailand by selling 80,000 golden pillow durians on his online platform T-mall within one minute. While Ma was in Thailand to make a mega-deal on investment on Thursday, Commerce Minister Sontirat Sontijirawong gifted the founder of China’s e-commerce giant Alibaba a fresh “golden pillow”, the Kingdom’s most famous variety of durian.

Alibaba has signed a deal for durian worth US$428 million (Bt13.4 billion) with the Thai government, according to state-run Xinhua News yesterday.

Ma said at a press interview in Bangkok on Thursday that during the pre-order two days before the launch, there were over 60,000 orders and immediately 40,000 durians were sold, which rose to 80,000 within a minute.

The “golden pillow” durian, Thailand’s most well-known export variety, has been sold on Alibaba’s online supermarket since Wednesday, a day before Ma signed four memoranda of understanding with the Thai government on trade, investment, support for e-commerce and tourism.

The Chinese e-commerce giant is reportedly splashing about $330 million in Thailand, as it aims to tap Chinese consumers’ appetite for the Southeast nation’s agricultural goods and its tourism market.

At the ceremony, Alibaba and the Thai Commerce Ministry launched the first official Thai rice flagship store on T-mall, the world’s largest third-party platform for brands and retailers, besides driving the sale of popular Thai fruits into China. Alibaba also pledged to assist Thai agriculture businesses in harnessing the power of the company’s insights into the Chinese market.

“China is on its way to becoming the world’s largest consumer, driven by rising income and a growing middle class of 300 million. There is no better time than now for trade-oriented countries to seize this opportunity to export to China as the country continues to open its doors wider for global trade,” said Ma.

Ma has been to Thailand several times and in 2016, he also met with Prime Minister Prayut Chan-o-cha during the G20 summit in China’s Hangzhou city.