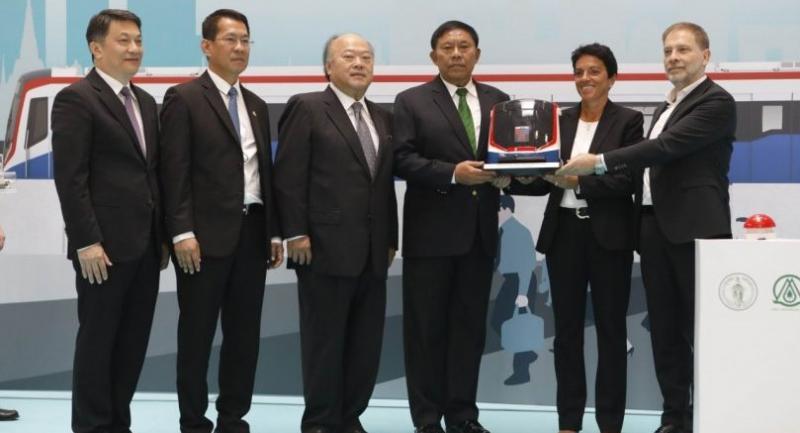 Bids for construction of a high-speed rail system linking three main airports and the management of motorways in and around the capital are likely to be invited by the government and the Bangkok Metropolitan Administration this year and into the next, Keeree said.
“We have already bought the term of reference for the high-speed train connecting the international airports of Suvarnbhumi, Don Mueang and U-Tapao and for the planned motorway system,” he said after ceremony marking the rollout from a plant in Ankara, Turkey, of the first of 22 four-car trains destined for the BTS network in Bangkok.
“And we are also interested in joining the bidding for the development of two new rail systems that will be owned by Bangkok Metropolitan Administration, including the Grey Line as a monorail section from Watcharapon-Rama 3 covering 39 kilometres, and a light rail system from Bangna to Suvarnabhumi, at 13.9 kilometres.”
Keeree, speaking at the production plant that is run as part of a joint venture between Germany’s Siemens and Turkey-based Bozankaya, said that BTSC is focused on continuing to develop the mass transit system and infrastructure that is required by Thailand in order to drive forward the economy and improve people’s lives.
Bangkok Metropolitan Administration governor Pol Gen Assavin Kwanmeung, attending the rollout ceremony for the new train, said an environmental impact assessment would be carried out for the two new rail systems involving the monorail and light rail links. The study is expected to be completed by the end of this year, Assavin said.
The Bangkok administration expects to open the biding for construction of the systems in 2019.
The two projects have a combined investment value of more than Bt30 billion.
Bangkok officials say a section of single track linking to Taksin station will become a double track route. The improved links will help to remedy congestion on the Silom rail route. Construction would start next year. Passengers on the Silom Line would enjoy greater convenience and will be spared the overcrowding that happens in the rush hours now, Assavin.
“We are confidence that the investment going into for the development of the rail system in Bangkok will also improve Bangkok’s traffic problems,” Assavin said
According to BTSC, the company’s projects include operating the train system for an extension from Samrong to Samut Prakan, and from Mochit to Lam Luk Ka, as well as the two new monorail routes – the Yellow Line from Lad Prao to Samrong, and the Pink Line from Chaengwattana to Minburi.
These projects will boost the number of passengers from an average of 800,000 per day to 2 million in 2022, the company’s chief executive officer Surapong Laoha-Unya said.
This expansion would see the company’s total revenue double between this year and 2022, Surapong added.
Surapong said that, following the rollout of the first of the trains from the Bozankaya plant in Ankara yesterday, the following 21 four-car trains would be delivered to Thailand in the first quarter of 2019. Twenty-four four-car trains being supplied by Changchun Railway Vehicles Co Ltd would begin arriving at the end of this year, until the end of 2019. They amount to a combined investment value of Bt11 billion. Currently, the company has 52 trains. The addition of the 46 new four-trains will bring to the total fleet to 96.