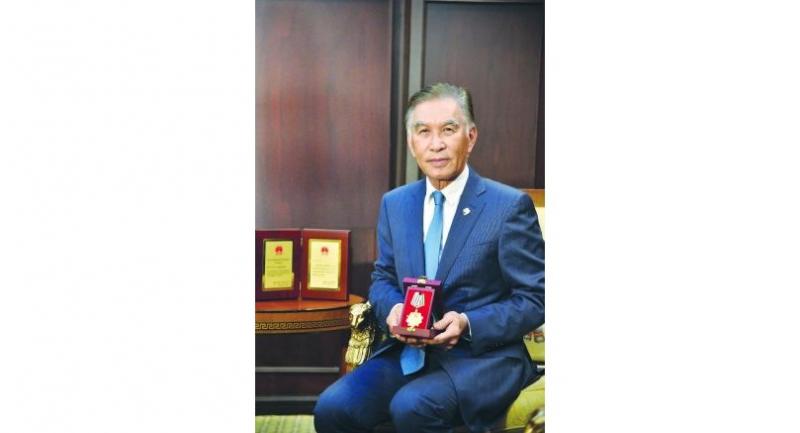 Isara poses with the "Friendship Award", presented by the Chinese government.

Thai farmers should change their thinking when it comes to production, he said.

“They should not be preoccupied with prices, but should instead focus on raising production volume and lowering costs,” he responded when asked about the low prices of farm products, including sugar canes.

If sugar cane farmers and sugar producers could increase their productivity, they will have much to gain when the market turns around, he said.

Isara was optimistic of a rebound in sugar price next year, from the current level of US$12 cents per pound.

The low prices have done much damage to many producers worldwide and many of them may go out of business, he noted.

He forecast that the group’s total revenue would stay flat at Bt90 billion this year with sugar production accounting for Bt50 billion, while its peripheral businesses of renewable energy, wood-substitute materials, fertiliser and logistics make up the balance.

“There is zero growth in revenue this year as sugar prices have remained low.

“However, production has risen and we can say our business is growing,” he said.

A onerai plot of sugar canes could yield up to Bt9,600 in income for farmers, compared with just Bt3,500 for rice growers, he said, adding that the calculation was based on recent market prices of the two farm produce, volumes of production per rai and the sizes of government subsidy, he noted.

“The productivity per rai is lower in rice farming due to the need for more water, not to mention many rural areas lack irrigation infrastructure,” he said.

“On average, a onerai rice plot yields about 250 kilograms of paddy. With the price of paddy at about Bt10 per kilogram and Bt1,000 in government subsidy per rai, the revenue would just be Bt3,500.

Whereas a onerai plot of sugar cane will generate about 12 tonnes of the produce at Bt800 per tonne, bringing in an income of Bt9,600, he explained.

It is a social trend where sugar is blamed for many health issues, but many tend to overlook salt which does more harm, he lamented.

Thailand restructured its sugar industry after Brazil, a rival proฌducer, raised the issue of Thai subsidies before the World Trade Organisation.

When protectionist measures such as high tariffs on imports, fixed domestic prices and large government subsidies have subsided, sugar farmers and producers will face pressure from global market price, resulting in volatility in home prices, he pointed out.

Meanwhile, the government has pledged to support sugar cane farmers with a handout of Bt50 per tonne, followed by sugar producers’ offer of Bt70 per tonne. Each farmer is entitled to receive support for up to 5,000 tonnes.

Isara, however, is confident that the huge market in China will offset any impact on the Thai industry. He also expects higher revenue from the country.

The group has been active in sugar production in China for 25 years while its new facility will start up by the end of the year.

Isara was recently honoured by the Chinese government with the “Friendship Award”, its highest official recognition for foreign experts who have made outstanding contributions to the country’s economic and social development.

It also plans to invest in animal feed production in China and is currently working with a US company on the production of xylose sugar, a variant with no calories.

The Mitr Phol Group is betting on the fast-expanding Asia market, given its rapid growth in population, Isara said.