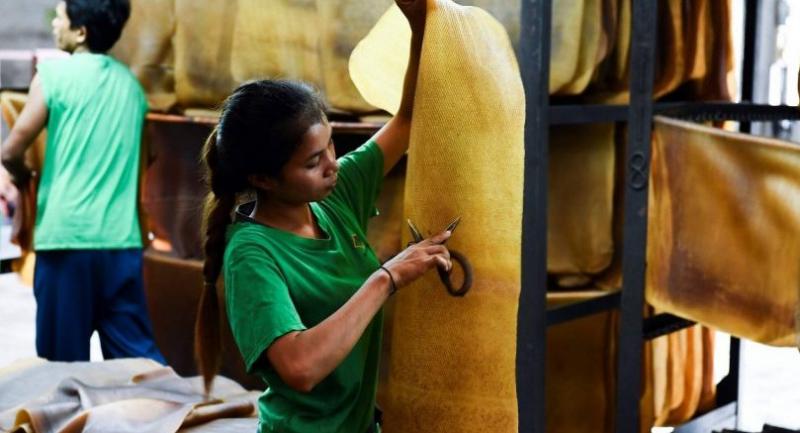 In this picture taken on October 17, 2018 a woman cuts out stains from a raw rubber sheet at a factory in Rayong Province. / AFP PHOTO

They work in the pre-dawn gloom tapping trees for the "white gold" that has made their country the world's top rubber producer -- but as prices plunge due to the US-China trade war, Thai farmers are giving up the sap. In this picture taken on October 17, 2018 a woman taps a tree to harvest latex at a rubber plantation in Rayong Province. //AFP PHOTO

Thai latex makes everything from tyres and condoms to baby pacifiers and surgical gloves, the fruit of the rubber trees cultivated across endless acres of the country.

But the rubber trade is at a crossroads as a bitter dispute between the world's two biggest economies ricochets across Southeast Asia with unexpected consequences.

Countries like Vietnam are benefiting as manufacturers migrate from China to avoid punishing tariffs on exports to the US.

But in Thailand, the price of rubber has slumped twenty percent since June, as those same tariffs bite hard on demand from factories in China -- the market for more than half its latex exports.

Some of Thailand's rubber workers are being forced to abandon their plantation jobs for factory work.

"I couldn't feed my children anymore," said Annita, who used to work 10 hours a day harvesting latex in Chiang Rai, northern Thailand, making just $7 a day, less than the minimum wage and half the going rate several years ago.

So she has taken a job at a packing plant earning around $9 daily.

"Nobody wanted to stay. The plantation owner can't find workers anymore -- the work is too difficult for the wages," she told AFP.

While the plight of US soybean farmers hit by the tariffs has grabbed the headlines -- they face a 25 percent levy to access China, the world's biggest soybean market -- other troubles are quietly brewing across the world.

The bottom has fallen out of the once-booming industry as Thai rubber prices plummet to about $1.21 a kilogram -- they were five times that in 2011.

Around one third of all the rubber in the world comes from Thailand's forests, where latex is harvested at night or before dawn by tappers who make an incision and collect the sap as it bleeds out. In this picture taken on October 17, 2018 a worker transports raw rubber sheets at a factory in Rayong Province. //AFP PHOTO

The country currently produces about 4.6 million tonnes of rubber a year and the sudden drop in Chinese demand has compounded a longer term global oversupply crisis to push prices off a cliff.

"A climate of uncertainty" pervades the industry after US tariffs hit nearly half of all Chinese imports, according to Karako Kittipol, marketing manager at Thai Hua Rubber.

"Chinese companies don't want to have too much rubber in stock," he told AFP.

The value of the yuan against the US dollar has also dipped, making rubber more expensive for Chinese manufacturers to buy.

Thailand is a bystander in the trade war between the world's two largest economies.

But the ruling junta is trying to address the supply-side issues and is aiming to reduce the area under cultivation for rubber by more than 60,000 hectares per year over the next five years.

At the same time rubber remains an intensely political issue in Thailand. In this picture taken on October 17, 2018 workers clean raw rubber sheets at a factory in Rayong Province. //AFP PHOTO

Farmers and tappers -- the majority of who come from the junta-aligned south -- are notoriously quick to protest when times get tough.

So the government last week stumped up an initial handout -- capped at roughly $700 per plantation --- to ease their immediate pain.

"(It is) not the right solution," said Apichit Duangdee, who felled a third of the trees on his small plantation earlier this year.

"Very few countries can produce natural rubber. It is a rare product and the Thai government should promote it better," he said.

If it fails to, the knock-on effects could be massive.

Tyre giant Michelin buys 40 percent of its natural rubber from Thailand, keeping vehicles on the road all over the world. In this picture taken on October 17, 2018 latex drips from a tree at a rubber plantation in Rayong Province. //AFP PHOTO

"If prices continue to fall, many farmers and processors will lose interest in latex and quality could fall," Lionel Dantiacq, Michelin's president for Asia and Oceania, told AFP.

"If prices go too high, the tyre industry will suffer... with repercussions for the consumer."