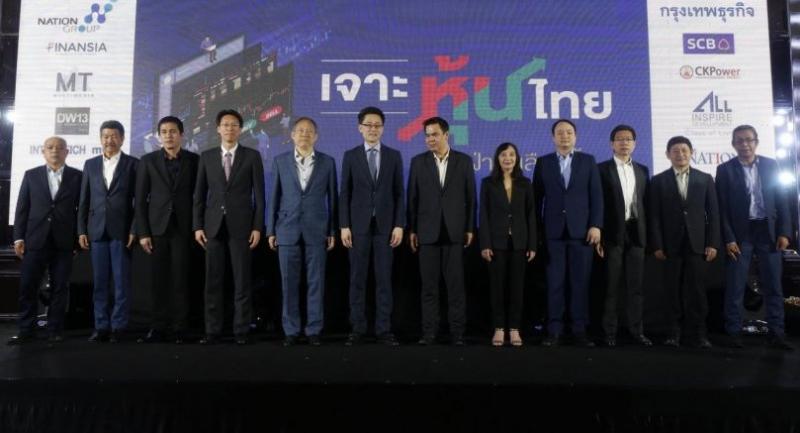 SET uptrend ‘to continue after poll’

THE THAI stock market is still in an upward trend this year, thanks to positive developments in the global financial market, and the Stock Exchange of Thailand (SET) Index should rebound after the election, provided there is no political turmoil, an expert predicted yesterday.

“For investors, it is not important which political party forms the new government, as long as it can offer stability and there is no political turmoil,” said Paiboon Nalinthrangkurn, chairman of the Federation of Thai Capital Market Organisation (Fetco).
Paiboon was speaking yesterday at the “Thai Stock Insight, Impact of the Election” event organised by Krungthep Turakij, a sister newspaper of The Nation.
He explained that as long as the political system in the Kingdom remains uncertain – as it has been over the past few years due to elections being postponed several times – only short-term investments will flow in.
Short-term investments mean a temporary inflow of capital, resulting in investors only seeking to gain short-term profits before pulling out their funds, he explained.
Also, he added, foreign investors are particularly worried that the new government would be weak, which could lead to political unrest.
“Investment in the stock market has been relatively low in the months leading to the election, with the potential for last-minute gains for election speculation,” Paiboon said.
In January, the SET Index closed at 1,641.73 points, showing a 5 per cent rise compared to December. This was largely due to the Election Commission announcing the election date in late January, said Soraphol Tulayasathien, senior executive vice president and chief of corporate strategy division for the SET.
The SET Index closed at 1,653.48 points at the end of February, showing a slight month-on-month increase, but closed at only 1,630.12 points last Friday.
However, Paiboon forecast that if the political situation remained stable after the election, the SET would follow global financial market trends and register gains throughout the second half of 2019.
He had also predicted earlier this year that the SET Index would reach 1,782 points by the end of 2019.
“The key factor affecting global market trends positively is the relaxation of monetary policies by key financial institutions,” he continued. “The US Federal Reserve, the People’s Bank of China, the Bank of England and the European Central Bank have all started showing signs of a change in attitude towards monetary policy.”
Paiboon pointed out that central banks across the world had increased interest rates in 2018, but this trend will likely reverse in 2019. The US Fed’s announcement that it will be “more careful” with monetary policies has boosted investor sentiments, leading to a positive trend in the global financial market.
“The US Federal Reserve is the most powerful financial institution, and its shift in attitude towards monetary policy is enough to have a significant impact on the global financial markets, including Thailand,” he said.
Hence, last year’s trend of capital inflow into the bond market and outflow from the stock market would likely reverse this year, he said.
“Thailand is a part of this financial trend, but the SET has been underperforming, partially due to political uncertainty. Though capital from both local and foreign investors is ready to flow into the Thai stock market, we will have to wait and see if the political situation remains stable after the election,” he contended.