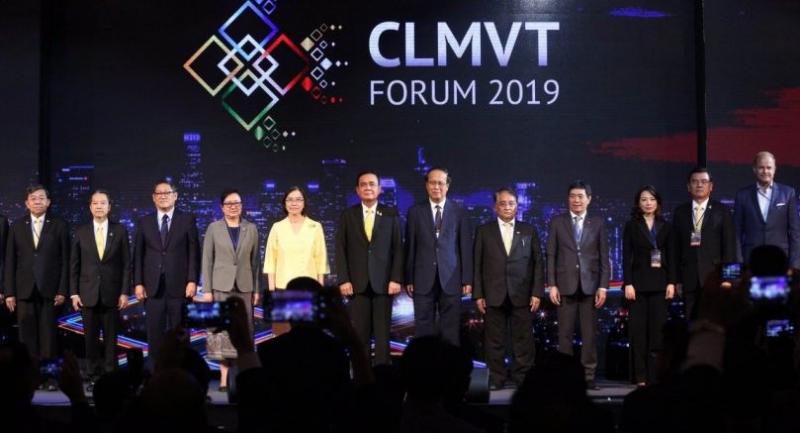 THE CLMVT (Cambodia, Laos, Myanmar, Vietnam and Thailand) subregion is set for significant growth in internal cooperation and investment in the next decade, said Prime Minister Prayut Chan-o-cha along with trade officials from the five countries.

To achieve that, the region’s private and public sectors must work together to enhance economic connectivity between the different CLMVT countries, Prayut said yesterday during the CLMVT forum 2019.

The total trade value of all CLMVT countries stood at US$951 billion (Bt29.2 trillion) in 2017, while intra-Asean trade was only valued at $75 billion (Bt2.3 trillion), according to the Thai Commerce Ministry.

“These figures demonstrate that there is still a large potential for intra-regional cooperation for CLMVT countries,” said acting Commerce Minister Chutima Bunyapraphasara.

With this trend, the CLMVT subregion is likely to experience significant growth in business cooperation and foreign direct investment, she said.

“To enhance connectivity in the region, cross-border transportation is being continuously developed and various projects have been included formally as part of the Asean Economic Community’s connectivity plan,” Chutima stated.

One such infrastructure development which is near completion is the trilateral highway, which will connect Moreh in India with Mae Sot in Thailand through Myanmar, she said.

Construction of the highway by India and Thailand has been completed, while Myanmar expects their part of the job to be finished in the next two years.

In 2017, foreign direct investment into CLMVT countries stood at $31.9 billion, a year-on-year growth of 28 per cent, according to the Thai Commerce Ministry.

Once the infrastructure projects are complete, the subregion will be able to attract even more foreign direct investments, especially into its special economic zones, Chutima claimed.

Other cross-border infrastructure projects include the East-West economic corridor, which will connect the South China Sea with the Indian Ocean through Vietnam, Laos, Thailand and Myanmar; the North-South economic corridor connecting Kunming in China with Central Thailand through Laos, and the Southern Economic Corridor which will connect the Andaman Sea with the Gulf of Thailand.

These projects are well underway, Chutima said, not revealing the date for completion for each of the projects.

The increased infrastructural connectivity will also be supported by an improvement to the region’s soft infrastructure, such as deregulating customs clearance to allow for more seamless movement of goods across the different CLMVT countries, she added. Pan Sorasak, Cambodia’s Commerce Minister stated: “The CLMVT countries have set up special economic zones across their borders to enhance connectivity and boost investment in the subregion. What we have to do next is to continue our efforts to improve the transportation infrastructure between these zones to enhance regional connectivity.”

This will be able to reduce the transportation cost for businesses and increase the ease of doing business across the subregion, he explained.

Meanwhile, Laos’ Minister of Industry, Khemmani Pholsena, said: “With the prolonged trade tensions having an adverse impact on the exports of all CLMVT countries, the subregion must look inwards to initiate more regional cooperation and rely less on exports.”

However, she said, the subregion currently faces the challenge of rising non-tariff measures erected by the CLMVT countries. This hinders trade and discourages cross-border cooperation between companies in the subregion’s private sector.

While the trade leaders of the CLMVT countries have outlined their vision of regional cooperation, the subregion’s internal trade volume is dwindling at an alarming speed. The rate of growth in bilateral trade between Thailand and Vietnam, the subregion’s two largest economies grew by only 1.39 per cent year-on-year in the first five months of this year (valued at $7.5 billion), compared to the same period last year, which saw a 16.86 per cent growth (valued at $7.2 billion), according to the Thai customs department.

A similar downtrend is seen in Thai trade with Myanmar and Cambodia, both plunging in growth rate to under 2 per cent in the first five months of the year, from about 20 per cent for the same period year on year.

The most worrying signs are in Thai-Laos trade, which was valued at $2.6 billion in the first five months this year, a reduction from $2.9 billion in the same period last year. This marks a 10 per cent year-on-year contraction in trade value between the two countries.