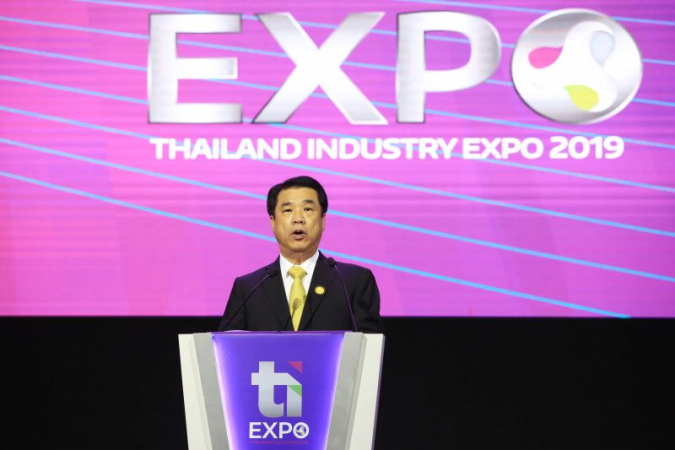 Industry Minister Suriya Juangroongruangkit has set three priorities for the strategy to boost industry inherited from the previous administration.

Easier access to bank loans for small and medium-sized enterprises (SMEs), promotion of 10 target industries, and better environmental protection would be the focus, Suriya said on Wednesday after presiding over the Thailand Industry Expo 2019 hosted by his ministry at Impact Muangthong Thani exhibition centre.
Suriya will visit the Federation of Thai Industries (FTI) early next month to gather information on challenges and problems faced by the industrial sector.
He said that his first priority was to continue pushing the promotion of 10 target industries – next-generation automotives, intelligent electronics, advanced agriculture and biotechnology, food processing, medical tourism, digital, robotics, aviation and logistics, comprehensive healthcare, and also biofuel and biochemicals.
Another priority is to seek help from the Finance Ministry and Bank of Thailand in easing access to loans for SMEs. Suriya will focus efforts on SMEs that find it difficult to obtain loans because of past debts that have already been cleared.
The third priority is to encourage factories to adopt environmentally friendly production processes, including the recycling of industrial waste.

Addressing the possibility of a rise in the minimum wage, he said that Prime Minister General Prayut Chan-o-cha had assigned a tripartite national daily wage committee to consider the issue.
Suriya said his ministry would also promote economic development zones akin to the Eastern Economic Corridor (EEC) in other regions of Thailand.
FTI chairman Supant Mongkolsuthree said that he would propose to Suriya plans supporting the use of local resources in mega projects.
He added that he would like to see the central bank launch long-term measures to curb speculation in the baht. He said the bank should trim the policy rate from the current 1.75 per cent to suppress the flow of foreign money speculating on the currency.