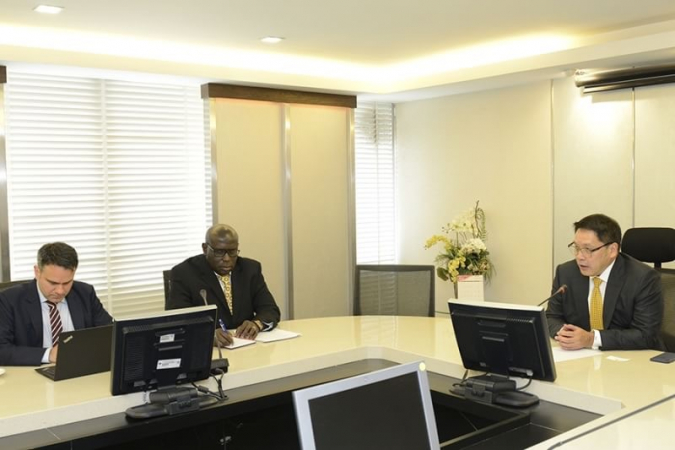 Leigh met Uttama to present a report on IMF’s estimation of the Thai economy for 2019 under the IMF Article IV Consultation. The report showed that though Thailand has been hit negatively by the US-China trade war, its economy has continued to grow due to domestic consumption and strong macroeconomic fundamentals.

The report also showed that Thailand’s international financial position remained stable, and that it will be able to cope with the volatility of the global economy thanks to its high international reserves.

IMF believes that private consumption and investment in Thailand are also likely to expand, though it has advised the government to be aware of the potential risk of international trade conflicts that might result in an economic slowdown for major trading partners.

However, the IMF report lauded Thailand’s recent fiscal policy, especially the 2018 State Finance Fiscal Discipline Act, which was passed to set up a financial discipline framework for the country and develop laws to make the government transparent and prevent corruption.

Leigh said the fiscal policy still needs to be expanded and that the government should accelerate its investments, especially in the Eastern Economic Corridor (EEC), and speed up the implementation of social welfare policies, such as the state-welfare card that aims to benefit more than 14.6 million low-income earners.

The IMF has also advised the government to develop the country’s workforce, so it is more productive and can boost Thailand’s competitiveness in line with the 20-year national strategy. It also said that in order to enter the digital economy era in accordance with the Thailand 4.0 model, the government needs to invest in education and public health as well as provide equal opportunities to people.

Meanwhile, Uttama told the IMF team that the government has continued promoting the EEC and has also been investing to develop the country’s infrastructure, such as the rail system, roads, ports and airports. The government will also improve the law on public-private partnerships so the private sector can also invest to develop infrastructure projects. He said the government is also planning to revise the country’s tax system in order to promote investment and to support small and medium enterprises in particular.