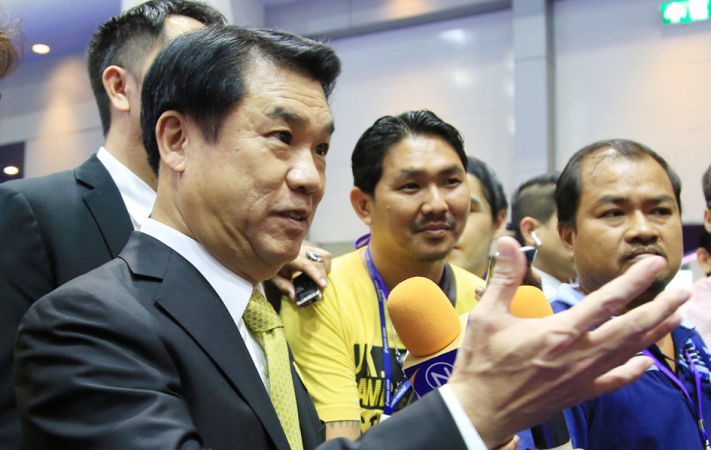 Industry Minister Suriya Juangroongruangkit said a study on his plan to reclaim 3,000 rai of land from the sea at the Laem Chabang deep seaport in Chon Buri province would take six months.

Suriya said the Petroleum Institute of Thailand would take about six months to complete the study.

Suriya was speaking to reporters while he was visiting the Industrial Estate Authority of Thailand on Monday. He said he would soon sign a contract to hire the petroleum institute to study the plan to reclaim 3,000 rai of land from the sea near the Laem Chabang deep seaport.

He said the move was not aimed at just allowing Exxon Mobil Crop to invest Bt330 billion in Thailand but also prepare Thai and foreign investors to invest in the port.

“Now, Exxon Mobil has an oil distillery near the Laem Chabang port in Si Racha district. They want to invest more and they want another 1,000 rai of land. The land on the shore near their initial investment site has all been occupied so we have to consider the land reclamation option,” Suriya said.

“So, I think we must look ahead to plan not just facilitate investment by Exxon Mobil.”

The minister said the study would be done comprehensively on both the environmental and economic impacts.

“If the study does not back the plan, it will be halted immediately,” Suriya said.

On the opposition by environmentalists, Suriya said if the study found the project would benefit the country, create jobs and expand the economy, he would go ahead with the project.

“We won’t do it for free because we will collect land-lease fee from investors,” Suriya added.

Somjin Philuek, governor of the Industrial Estate Authority of Thailand, said if the project were approved, her authority would be in charge of land reclamation. She said the authority would first wait to see the results of the study by the petroleum institute.