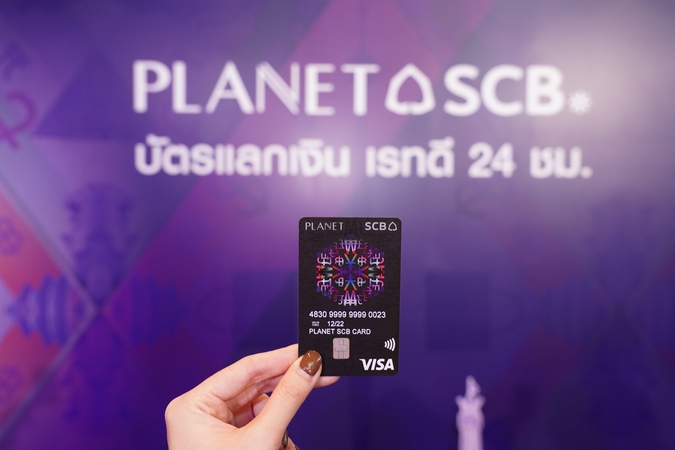 Siam Commercial Bank has joined hands with VISA to launch “PLANET SCB” under a “Borderless Foreign Currency Exchange” concept. With only one card, customers will be able to make payments worldwide and to exchange and keep foreign currencies when the rates are best.

Offering equally competitive exchange rates to those offered by money changers, the card will allow currency exchange for up to 13 currencies, while also supporting baht and foreign currency payments worldwide without a 2.5 per cent conversion fee. This will let customers convert foreign currencies conveniently and quickly anywhere 24 hours a day through the SCB EASY application, according to release on Wednesday.

The PLANET SCB card also allows cash withdrawal, payments, and shopping on-line to a maximum of Bt500,000 per day. With these features, SCB is expecting to acquire 200,000 members, who will spend more than Bt5 billion in total.

Under SCB’s “Bank as a Platform” transformation strategy, it is committed to developing new capabilities, particularly the adoption of digital technology as a key driver for effective service model take up, said Auraratana Jutimitta, the first executive vice president, and chief retail and business banking officer.

To enable it to achieve the planned target, it is also important for the Bank to embrace strong “partnership banking” and take into account a customer-centric stance to better understand customers in order to deliver financial services that truly suit their lifestyles, she said in the release.

“The bank is therefore partnering with world-class service providers with strong expertise to bring service synergy. The partnership will take advantage of modern technology to enhance the potential and scope of services, while continually providing Thai customers in every segment access to a seamless global payment experience.”

According to an analysis by the SCB Economic Intelligence Centre and information from the Ministry of Tourism and Sports, the number of Thai people travelling overseas has gone up by 12 per cent on average over the past five years, and stood at 10 million people in 2018, according to the release.

Total overseas spending has risen to Bt320 billion, the release continued. Data from Euromoney also suggests that the growth rate of foreign internet retailing conducted in Thailand is as high as 19 per cent, or some Bt28 billion in the previous year. Bearing these trends in mind, SCB has decided to commence its first SCB Global Payment series, focusing on customers using foreign currencies for payments by partnering with world-class payment service provider VISA through the Planet SCB card.

The card will cater to customer requirements in three major groups – those travelling overseas, on-line shoppers and those studying abroad.

The card can be used for payments in any currency worldwide without a 2.5 per cent conversion fee and can be used for currency exchange 24 hours a day through the SCB EASY app. SCB plans to acquire more than 200,00 PLANET SCB cards in the first year with more than Bt5 billion spending, added Auraratana.

The card is valid for three years with no expiry date on the remaining card balance, and with a free annual fee throughout the validity period.