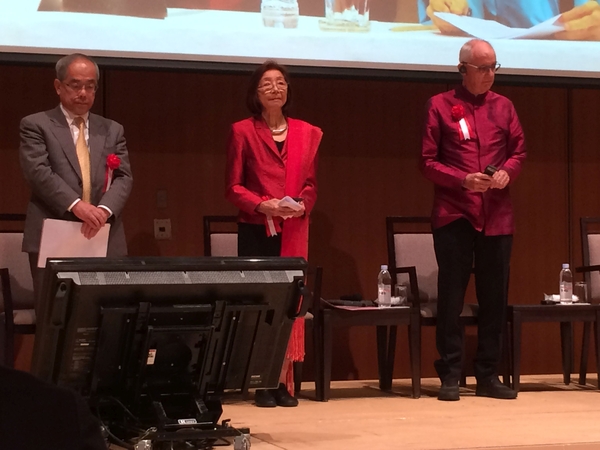 Thailand needs new thinking on its economy, moving away from the emphasis on growth and consumption to the quality of life rather than the quantity of things, said Pasuk Phongpaichit, Emeritus Professor in Political Economy, Chulalongkorn University.

She made the remark at the Fukuoka Prize Symposium held on September 10 in the Japanese city, in an event celebrating its 30th anniversary.

Pasuk and historian Chris Baker, the co-winners of the Fukuoka Prize’s 2017 Grand Prize, were among five past laureates invited to share their views in the Symposium, which had as its theme “The coexistence of developing Asia and its cultures-What Fukuoka Prize and the successive Prize laureates have protected, nurtured and newly created in last 30 years”.

Pasuk said that as an economy, Thailand along with others in Southeast Asia, have been doing quite successfully. But Thailand’s big problem is inequality.

“As we got richer, the gap between rich and poor grew wider and wider,” she said.

She added the economic inequality creates social division. Some people are denied their basic rights, and human respect.

“Our politics have been in turmoil for over a decade. Behind that turmoil is our gaping inequality. But many people hesitate to recognise that,” she said, adding that new threats from AI and climate change will make things worse. “Automation will mean less work, less income and less dignity for many, while floods, droughts and food shortages resulting from climate change will hurt the poorest and most vulnerable.

“Growing inequality has been a problem worldwide for around 25 years. There have been many books and reports on the subject but nothing has much been done. This is also true in Thailand. Many of our leaders now accept that inequality is a problem. They give speeches and write manifestoes promising to do something about it. They ask economists like me to give them advice, and I do so. But nothing much happens.”

She pointed out that one simple reason for this failure is the power wielded by large corporations and the rich, both in public positions and behind the scenes. This is very difficult to change.

“But we must not give up. I take inspiration from other societies which are much more equal than ours and often happier too. They show that inequality can be evened out by the public policies,”

She added that Thailand needs new thinking on economics, moving away from the emphasis on growth and consumption per se, towards more efficiency in the use of resources, less waste, more care, more greening of the cities, which robots cannot do, and to focus on the quality of life rather than the quantity of things.

“That said, inequality cannot be stamped out overnight. Thailand needs to have the continuity in the administrations run by the democratically elected governments to solve the inequality on a non-interrupted basis.”

Any income tax measures should not only aimed at boosting the economy but also ensuring equal income distribution.

Also on September 10, the Fukuoka Prize hosted an official ceremony to grant its 2019 awards to the three laureates.

Crown Prince Akishino and his wife Crown Princess Kiko were also present at the ceremony. 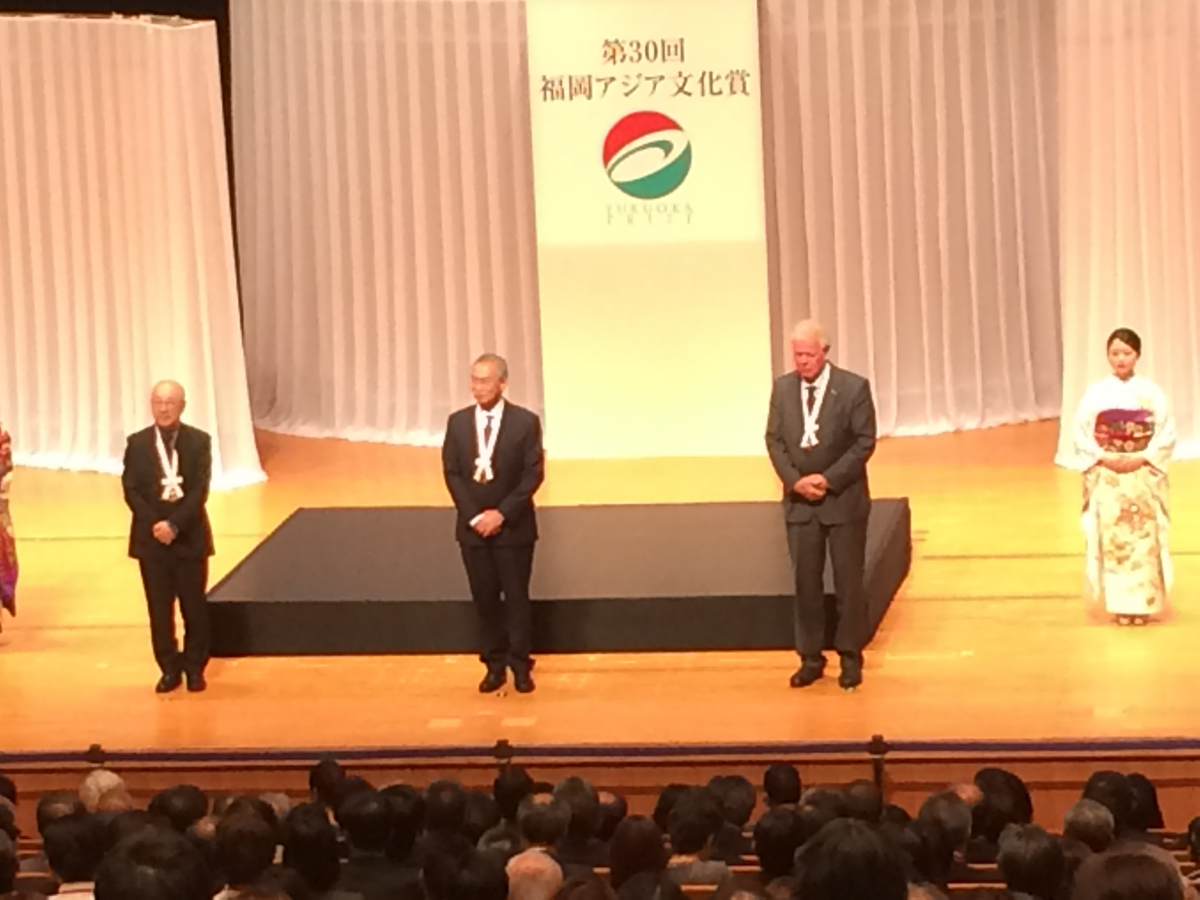 David is a sociologist who has played a dynamic part in achieving social justice in the Philippines, by sharing his knowledge not only with the students through his university lectures but also more widely with the general public through TV programmes and newspaper columns. He has also striven for intellectual and cultural exchanges and mutual understanding among Asian countries, through cooperative links with the United Nations University and Japanese university lecturers and intellectuals.

His determination and activity to transform currently existing society for the better, by opening universities to the public and by working together with citizens or overseas countries, have won him high praise as a leading Asian public intellectual, a man of action as well as ideas. Blussé has created a new academic field, broad in its chronological and geographical scope, “the maritime history of early modern East/Southeast Asia”, establishing an interdisciplinary approach as a foundation for historical studies.

In the currently popular trend of “global history” in historical studies, his approach is highly regarded as providing an ideal framework based on empirical micro analysis without ever losing the macro conceptual perspective. 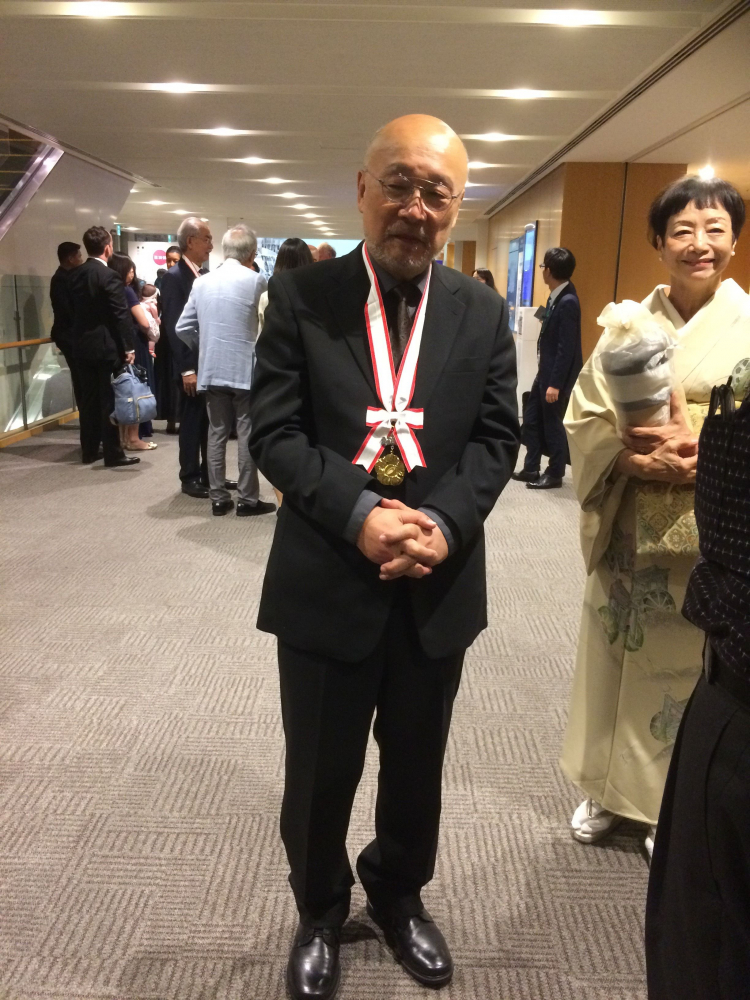 His innovative work has been highly praised both in Japan and abroad. He has also taken a leading role in promoting international exchange with Asian theatrical professionals, and enhancing the construction of regional networks.

Furthermore, working as the artistic director of public theatres, he has engaged in embodying the concept of “theatre as a meeting point for local people”, and thus completely transformed the conventional image of public halls.

The Fukuoka Prize is an internationally recognized award organized by Fukuoka City. It is given to individuals and/or groups that have contributed to the preservation and creation of Asian cultures.

The Grand Prize is presented to individual/group who has made outstanding contributions to the preservation and creation of Asian culture and have exhibited the significance of Asian culture to the world through the internationality, universality, popularity and/or creativity of their work.

The Academic Prize goes to individuals/groups that have made outstanding achievements in the field of Asian studies, contributing to the world's understanding of Asia. It covers the fields of social sciences, such as history, archaeology, cultural anthropology, economics, and political science.

The Arts and Culture Prize is awarded to individuals/groups that have made outstanding contributions in the cultivation and/or advancement of the unique and diverse arts and culture of Asia. It covers the fields such as fine arts, literature, music, drama, dance, film, architecture, traditional and ethnic culture.