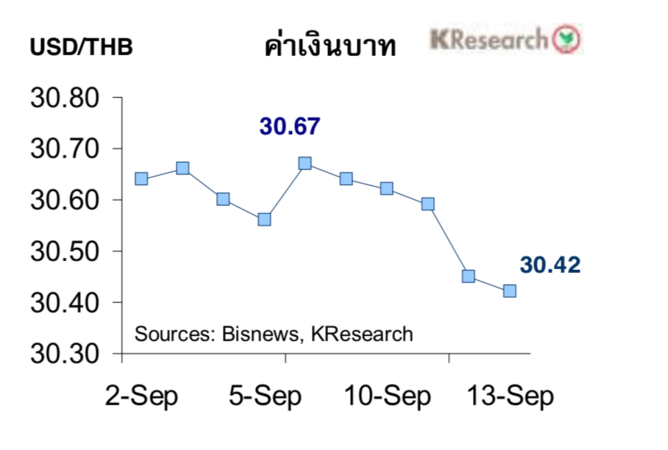 The baht continued its upward trend, appreciating to Bt30.42 to the US dollar on Friday, up from Bt30.67 the previous Friday, after having risen to a six-year high of Bt30.36 at some time during the day.

Regional currencies also moved up against the US dollar as markets expressed relief about the trade war and the European Central Bank (ECB)’s latest monetary easing.

The ECB cut its deposit facility rate, paid by banks on reserves parked with the ECB, to deeper negative territory from minus 0.4 per cent to minus 0.5 per cent and resumed bond purchases to encourage banks to lend more.

The Kasikorn Research Centre forecast that the baht may move in a range of Bt30.20 and Bt30.60 a dollar next week.

Investors are awaiting latest developments in the trade war, the developments in Brexit, the meeting of the US Federal Reserve on September 17-18, the meeting of the Bank of Japan and Chinese economic indicators. Investors are also eagerly awaiting key economic indicators in the US, including a survey of industrial activities by the Fed’s New York branch; business trends by the Fed’s Philadelphia branch; the housing index in September; industrial production, second-home sales, housing starts in August and net capital flows in July, the research house added.