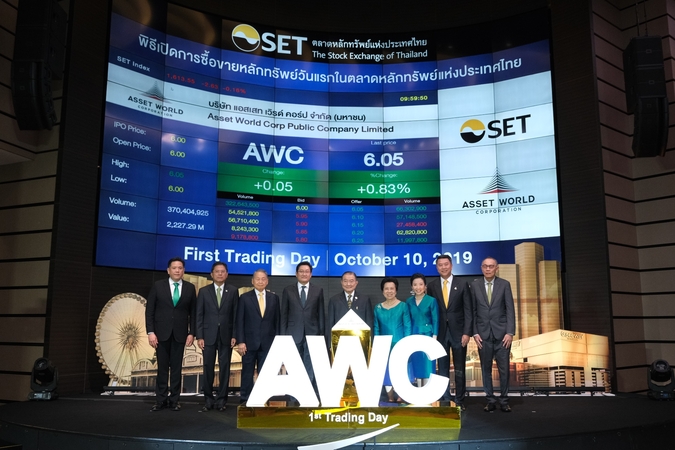 Tycoon Charoen and his family members took part in the company’s debut event. AWC is a holding company that invests in property development companies. It has two core businesses. The first is hospitality, in which its hotel portfolio is managed by renowned hotel chain operators with internationally recognised and luxury brands, namely Marriott a Luxury Collection Hotel, Okura, Le Meridien, Banyan Tree, Hilton, DoubleTree by Hilton, Sheraton and Melia. The second core business comprises retail and commercial buildings from retail and wholesale to office buildings.

AWC has a registered paid-up capital of Bt32 billion, consisting of 24 billion existing common shares and 8 billion newly issued shares, with a par value of Bt1 each.

It offered 6.96 billion shares to the general public via the IPO, and 1.04 billion over-allotment shares, at Bt6 each, for a total of Bt41.74 billion (excluding a greenshoe option).

According to a SET release, the AWC chief executive officer and president, Wallapa Traisorat, said that the funds raised would be used to acquire an additional 12 properties, of which four are operating hotels, six are hotels under construction and the remaining two are mixed-used properties under development. It would also repay bank loans and develop the company’s assets with the funds, Wallapa said in the SET release.

AWC’s major shareholder after the IPO is the Charoen Sirivadhanabhakdi family at 77.5 per cent.