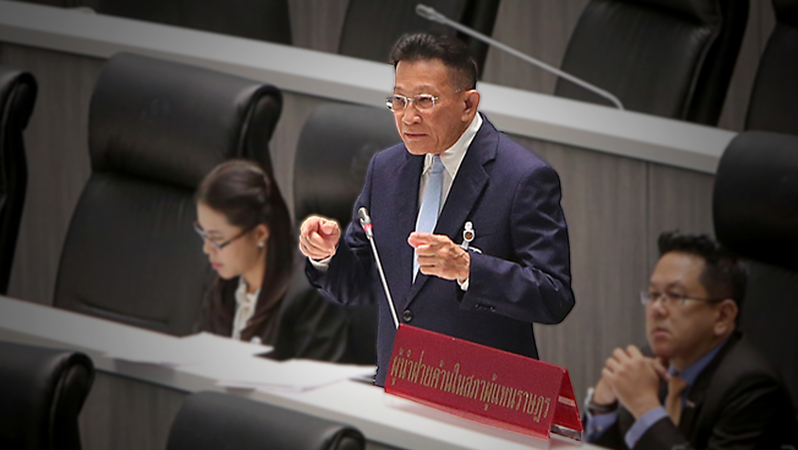 The opposition attacked the government for prioritising military spending instead of helping people cope with economic hardships on Thursday (October 17), as Parliament began debating the budget bill.

The government and the opposition will spend two more days debating the fiscal 2020 national budget in its first reading. If the bill is passed by Parliament, it is due to be implemented early next year.

The government has continued running budget deficits amid a sharp domestic and global economic slowdown.

In his presentation, Prayut said this budget is in line with the government’s 20-year national strategy (2018-2037), which aims to improve people’s living standards and develop the economy sustainably.

The opposition shot back, saying the government was prioritising defence spending instead of focusing on boosting people’s income.

Opposition leader Sompong Amornvivat said that despite five years under Prayut’s junta-led administration when the country’s total spending had hit Bt14.3 trillion with loans of Bt2.2 trillion, the economy failed to advance.

He also pointed out that more than Bt6 billion had been allocated to the Defence Ministry in the latest budget, while the Interior Ministry is getting Bt25 billion more than the previous year. The government also set aside a large central fund of Bt518.8 billion, which it can spend freely without Parliament’s scrutiny or consent, Sompong said, as he warned the government against using this money to purchase more military hardware.

He also said that the government’s move to stimulate domestic tourism by giving cash to travellers is a waste of money because it will not boost productivity.

“The budget bill should be redrafted,” he said.

Anudit Nakorntab, Pheu Thai MP, called on the government to postpone its plans to purchase arms, especially since the country is not facing an emergency situation and that the issue of people facing economic hardship is more important.

He also pointed out that the previous junta-led government had also used the central fund to purchase tanks and build guesthouses for the Navy.