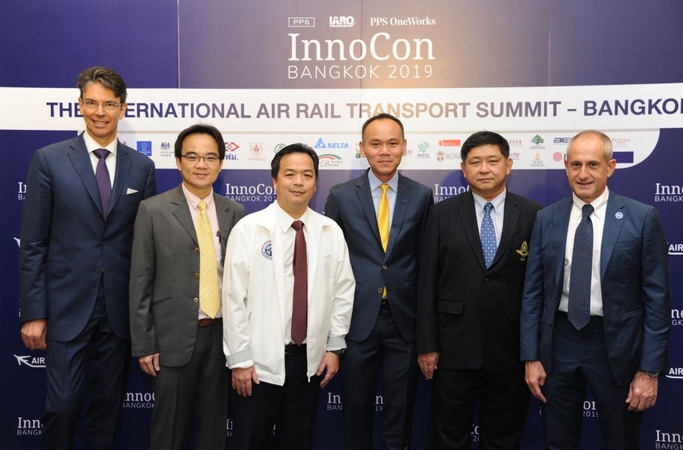 Innocon Bangkok, a part of the International Air Rail Transport Summit set for November 20 at Centara Grand at CentralWorld, will feature some of the world’s leading lights in urban infrastructure discussing the opportunities and challenges facing the industry.

The conference will examine Thailand’s priorities post-2020 and what action is required from all stakeholders to ensure the country’s long-term success.

Planned and organised by the International Air Rail Organisation (IARO), Project Planning Service (PPS) and PPS OneWorks, the event is expected to attract 600 delegates from 30 countries.

Delegates will be able to learn from 30 high-level speakers from Thailand and beyond.

The morning will have discussions from local and overseas industry leaders and public authorities. In the afternoon there will be two focus sessions:

• InnoCon Bangkok – As digital technology powers a new era of infrastructure construction, experts discuss how best to leverage the increasingly large amounts of data and technology to increase benefits to all.

Dr Phongthon Tharachai, CEO of PPS, and Giulio De Carli, managing partner of OneWorks, will open the event with an insightful overview of the industry before introducing Italyian Ambassador Lorenzo Galanti, who will discuss “Why Thailand is a key destination for infrastructure investment in Asia”.

Voravuth Mala, governor of the State Railway of Thailand, will reveal “The vision for Thailand’s railway network” and Surachet Laophulsuk, assistant governor of the Mass Rapid Transit Authority, will talk about “The construction of urban electric train networks and the next challenging steps for Thailand”.

Another important session from the Engineering Institute of Thailand under the patronage of His Majesty the King, will examine why “Innovation and investment in talent is essential for Thailand’s future success”.

Bangkok is currently undergoing an urban transport infrastructure boom, with a series of upgrades being commissioned to connect the city’s 10 million inhabitants and 20 million annual foreign visitors with three airports.

These are among the most extensive and ambitious air rail infrastructure developments currently being undertaken anywhere in the world, and Air Rail 2019 will shine a light on the strategy, planning, partnerships and funding that are required to make these initiatives a success.