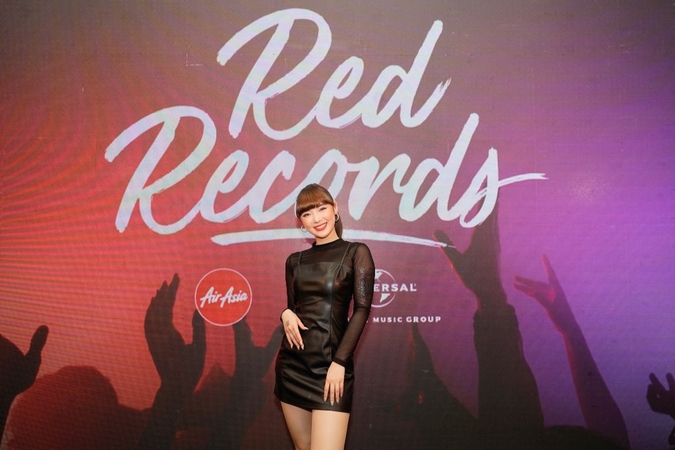 RedRecords out to revolutionise the future of Asian pop culture

AirAsia Group, a leading travel and lifestyle company in Asia Pacific and Universal Music Group (UMG), the world's leader in music-based entertainment, have jointly launched RedRecords, an innovative new label partnership focused on signing, developing and breaking new Asian artists and elevating 'A-pop' globally to new audiences throughout the region and around the world.

The two companies announced the groundbreaking partnership at a press conference, held in Kuala Lumpur today (December 16).
RedRecords will focus on discovering and developing talent from Southeast Asia and throughout the wider continent and form a clear and unique sound that reflects the diverse and rich musical culture of the continent.
RedRecords will be based in Kuala Lumpur and Los Angeles and will combine UMG's industry-leading track record in artist development with AirAsia's regional and global marketing strength to expand A-Pop's reach beyond national borders and languages to reach audiences around the world.

In addition to artist development and A&R, the label will provide distribution and marketing, as well as management and agency services. The label will be led by Hassan Choudhury, head of Music for AirAsia Group, who will take on the role of CEO of RedRecords.
Speaking on the announcement, Tony Fernandes, CEO of AirAsia Group said: "This announcement is incredibly important to me. It appears life has come full circle for both myself and my AirAsia brothers, Kamarudin and Nadda, whom I met through our early days in music".
"We have already revolutionised air travel enabling everyone to fly and as we celebrate 18 years of operation for AirAsia - we are focused on transforming the airline into a global digital travel and lifestyle leader. Now we are also heading back to our musical roots to revolutionise the future of Asian pop culture and give it the world wide stage it deserves in conjunction with Universal Music to launch RedRecords".
Sir Lucian Grainge, Chairman & CEO of Universal Music Group said: "I am delighted to announce the launch of RedRecords with Tony and his team at AirAsia. The worldwide success of Latin and K-Pop has demonstrated that in the streaming era there are no barriers to great music regardless of language. Together with the combined strategic marketing reach and resources of AirAsia and UMG, we can provide Asian artists an exciting opportunity to truly go global".
Adam Granite, EVP/Market Development of Universal Music Group said: "We are excited to officially launch RedRecords today with AirAsia. Together we share a commitment to the long-term development and transformation of the music ecosystem within the region. A region filled with new talent that has the potential to reach almost 700 million people across Southeast Asia alone and where music is increasingly driven by a young, social and mobile-driven audience. Together we are confident that the team at RedRecords will help introduce A-pop to a new global audience, ready to embrace new talent from throughout Asia".
Hassan Choudhury, Head of Music for AirAsia Group and CEO of RedRecords said: "This is an excellent opportunity to leverage both AirAsia and UMG's potential in a musical journey. Having worked for both of these incredible companies, witnessing first hand their enormous strengths in their respective industries, I aim to bring the creative forces of both teams together in order to help develop the undoubted music talent that lays here in Asia."

At the press conference, the label announced the signing of Thai pop-artist and influencer Jannine Weigel, as its marquee first artist. Weigel, a singer, songwriter, influencer, gamer and actor has released several singles and EPs and amassed a huge following on social media, with more than 600 million views and 3.3 million followers on YouTube, in addition to 3.2 million followers on Facebook, 1.5 million on Instagram and more than 500,000 on TikTok.
On signing to RedRecords, Jannine Weigel said, "I'm so proud to be the first artist to join RedRecords and to have the support of this amazing team, which will help take my career to even greater heights. My fans are going to love all the incredible experiences that we have in store for them. I cannot wait for you to hear my new music."
Earlier this year, UMG announced a strategic expansion of operations within the region with the launch of a new regional headquarters in Singapore.
UMG is committed to growing the entire music ecosystem throughout Southeast Asia, extending its focus and commitment to local language and domestic repertoire in order to provide music fans with the best music experience throughout the region