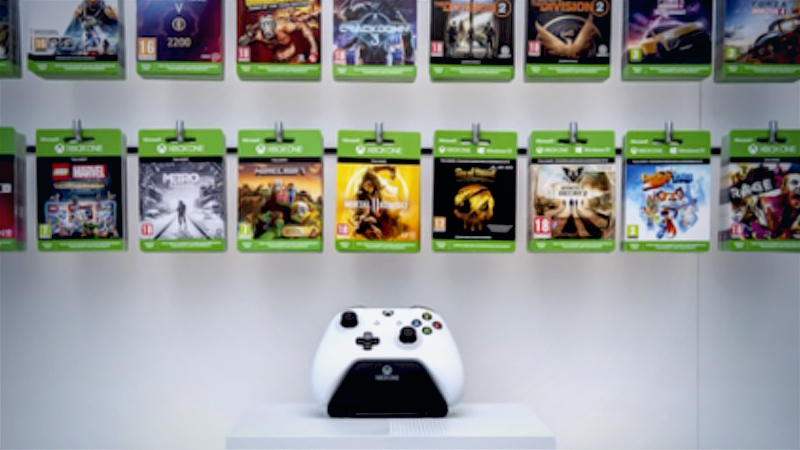 An Xbox One controller sits on display below gaming passes at a Microsoft store in London on July 9, 2019. CREDIT: Bloomberg photo by Chris J. Ratcliffe.

The latest round of the gaming console wars has officially begun. Following a protracted standoff between Microsoft and Sony over which company would share their plans first, Microsoft blinked first, revealing its Xbox launch details this week. Of note, the software giant is releasing two tiers of devices at different price points. It's an unprecedented move, but will it pay off? I am not sure.

Responding to industry speculation, Microsoft confirmed on social media the existence of the long-rumored next-generation Xbox Series S console, along with its low $299 price and Nov. 10 release date. At the same time, the company also will roll out a higher-end Xbox Series X for $499. As of yet, Sony hasn't revealed pricing or release date details for its next-generation PlayStation 5.

The stakes couldn't be bigger for the two console rivals. The video-game industry has already thrived amid the pandemic as an attractive option for in-home entertainment. As consumer habits get more ingrained, analysts believe the sector may offer one of the brightest growth prospects over the next few years. And it is a enormous opportunity. Research firm Newzoo projects the overall gaming market will grow to nearly $200 billion by 2023 from an estimated $160 billion this year. Even entertainment executives that have long downplayed gaming are increasingly intrigued. In an interview with Variety, Netflix Inc. CEO Reed Hastings said video games were one of the key categories his company is looking at entering in the future.

So, what is Microsoft trying to do with its new strategy? With the two-pronged device offering, the company is hoping it can gain share by attracting hard-core gamers - who crave the best performance - with the Xbox Series X, while also accommodating the casual, price-sensitive customers with the cheaper Xbox Series S. Microsoft also plans to emphasize its Game Pass service, which gives its subscribers affordable access to a library of more than 100 games for a $10 monthly fee.

Microsoft's plan may seem to make sense on paper, but it has several big flaws. First, the naming convention is a confusing mess. One can imagine the poor store sales clerk, who has to explain the differences between the Xbox Series X, Xbox Series S and the prior generation's Xbox One S to the average consumer. In contrast, Sony's proposition of PlayStation 5 as being much more powerful than the PlayStation 4 is a more concise message. Second, and more importantly, success in the video-game industry has always been about which company can offer the best, exclusive gaming experiences.

Unfortunately for Microsoft, its new hardware strategy doesn't fix this deficiency, where it lags far behind its Japanese competitor. Simply, the Sony PlayStation's lineup of exclusive franchises is unparalleled. This year, the game maker has already generated record-breaking sales numbers for its original games such as Last of Us Part II and Ghost of Tsushima, presaging further strong results for those franchises. And Sony has already announced upcoming PlayStation 5 titles in key series such as Horizon, Gran Turismo and Spiderman. Microsoft's lineup doesn't have the same cachet. To add insult to injury, the company's anchor title for its next-generation console launch, Halo Infinite, was recently delayed to next year on the back of development complications.

The existence of a cheaper Xbox console may be a critical problem in itself. Earlier this year, a Sony executive said his company believes "in generations." What he meant was that by launching games specifically designed for the high-performance PlayStation 5, Sony could attract gamers with releases that take full advantage of the advanced technical capabilities and features of the new console. Therein lies the negative consequence of releasing the under-powered Xbox Series S console, which has one-third the graphics performance of the Series X. The inexpensive console's anemic horsepower will force developers to dumb down their games to work on the lowest-common denominator device. That means Sony's games will likely have better visuals and more immersive gaming worlds versus the Xbox counterparts.

Even if Microsoft was able to roughly match its rival's attributes point-by-point, it wouldn't be enough. Sony has the advantage of the large user base it has acquired during the current generation, which engenders an enormous switching cost for its users. According to Jefferies, the console maker has sold about 110 million PlayStation 4 consoles since 2013, compared to Microsoft's roughly 50 million units. In its latest financial report, Sony said it had 45 million subscribers for its PlayStation Plus service, which enables online multiplayer functionality for its users. Since tens of millions of PlayStation owners have built up in-game social connections playing games on the Sony platform, they will likely upgrade to a PlayStation 5 to maintain their gaming relationships and access to their PlayStation 4 games, all things being equal.

Bottom line, Microsoft's two-tiered strategy that attempts to make next-generation console gaming more affordable misses the mark. The company seems to have forgotten the most important video-game industry lesson: It's all about the games.

This column does not necessarily reflect the opinion of the editorial board or Bloomberg LP and its owners. Kim is a Bloomberg Opinion columnist covering technology.