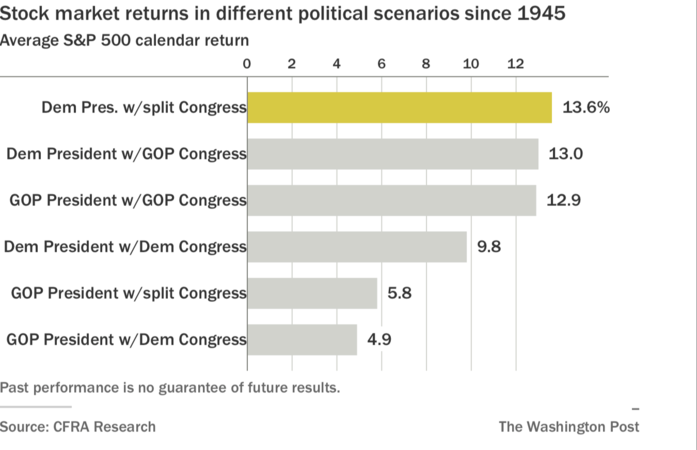 Americans woke up Wednesday to an undecided presidential election, which could be the case for some time, depending on legal challenges and recounts. For the economy, that means uncertainty is here to stay in 2020.

Business leaders and investors tend to hate uncertainty, and this political situation adds more of it as the nation is already dealing with a second big wave of coronavirus cases and a contentious battle in Congress over another stimulus package.

The early read among economists and Wall Street analysts is to buckle up for a wild few weeks.

Many economists are marking down their forecasts for growth, at least slightly, in the final months of 2020 and early 2021, as uncertainty and covid-19 cases mount. A stimulus package of some sort is still expected to pass, but economists no longer expect it to be more than $2 trillion like it might have been in a "blue wave" scenario, where Democrats won the White House and the Senate.

Regardless of who wins the presidency, it looks increasingly likely that the United States is going to keep experiencing a "K-shaped recovery," in which much of the upper half continues doing pretty well and many at the bottom continue to slip.

Stocks soared Wednesday, with the Dow Jones industrial average rising 368 points (1.3%) and the Nasdaq gaining 3.9% as Wall Street increasingly priced in a presidential victory by Joe Biden and a Republican-led Senate. Wall Street analysts were quick to point out that kind of gridlock has been very good for stocks in the past and it's likely to mean no major changes for tax or climate policy as well as health care.

An analysis by Sam Stovall, chief investment strategist at CFRA Research, found that since World War II stocks had the highest gains when there was a Democratic president and a split Congress (one party controlling the House and the other controlling the Senate). Wall Street traders see an increasing chance of that big-return scenario occurring with a Biden presidency, GOP-led Senate and Democratic House. PredictIt and Betfair, two websites traders often use to express their views on who will win elections, were both showing Biden with about an 80% chance of winning.

"Senate control is at least as important as the White House. Under a narrow Republican Senate majority, we would expect no major tax increases but also a fiscal stimulus package of less than $1 trillion," Goldman Sachs wrote Wednesday in a note to clients.

The Federal Reserve, which will hold a news conference Thursday, is widely expected to keep interest rates near zero for years, which should continue to make it attractive for relatively well-off Americans to keep buying stocks and homes. The uncertainty could even push the Fed to attempt more of its own stimulus for the economy.

But it's a much more pessimistic outlook for jobs, which are barely half recovered. Hiring has been slowing, and the latest Labor Department jobs report that comes out Friday is expected to show more loss in momentum for job growth. More than 22 million people remain on unemployment, a figure that has fallen little since the summer. Jobless benefits have been scaled back sharply for the unemployed. Measures aimed to help those facing student loan debt and evictions are set to expire at the end of the year. The struggles are growing for millions unable to get back to work.

"People need this unemployment money now. I've never had to live like this before. I've always been good with money, but you can't survive on this," said Ronnie Lauth, 24, an actor and barista in New York City who has not been able to find another job.

Lauth is living on $300 a week in unemployment benefits, which barely covers rent. His roommates who still have jobs have been buying him food.

All of this sets up an anxious situation for many Americans this winter.

The future of the economy -- and to some extent markets -- depends heavily on three key questions, many analysts say: What happens with the virus and stimulus; How quickly Americans start spending again on services like travel, restaurants and entertainment; And whether the hotly contested election sparks social unrest.

If the political situation triggers more social unrest, that could have long-lasting consequences for the nation and economy, weighing on consumer spending and potentially hurting businesses, especially restaurants and stores in downturn areas. In preparation for this election, stores across the country boarded up in anticipation of marches and protests that could turn ugly, and companies like United Airlines moved their flight crews out of hotels in urban areas.

The United States is "even more divided than it was in 2016," said Peter Atwater, founder of Financial Insyghts and a professor at the College of William & Mary. "The conditions are ripe for outrage."

The U.S. economy still depends heavily on consumer spending. That's already heavily depressed because of the coronavirus, but protests and, especially, rioting would likely dampen it even further.

The biggest problem for the economy for months now has been the deadly coronavirus. It remains far from under control, and Americans are staying home and spending only a fraction of what they used to in the pre-covid era. Until that changes, the service sector will remain anemic and the recovery is likely to stall, says Constance Hunter, chief economist at KPMG.

"Until we get a handle on the virus, the economy will remain in a world of hurt," Hunter said.

Hunter points out that spending on services typically makes up more than 45 percent of economic growth. But in the third quarter - when the United States saw a big rebound - spending on services like restaurants, travel and entertainment remained sluggish, at below 43 percent of economic growth. That might not sound like a big difference, but it amounted to over $500 billion less flowing through the economy in the third quarter of 2020 vs. the same period last year.

There's hope that if the virus gets under control, there will be a flood of spending again, but businesses have to survive until that point. Small businesses, in particular, are on edge. It's unclear if that rebound will happen summer 2021 or much later than that.

What's shaping up for the economy and markets was perhaps best summarized by JPMorgan in a note Wednesday morning: It's "unclear on the next President but fairly clear that he'll face Congressional resistance on anything transformational, whether on the budgetary or regulatory front."

The gridlock might be good for markets and investors. But a lot of pain remains for small business owners and the unemployed. For them, much is still highly uncertain.