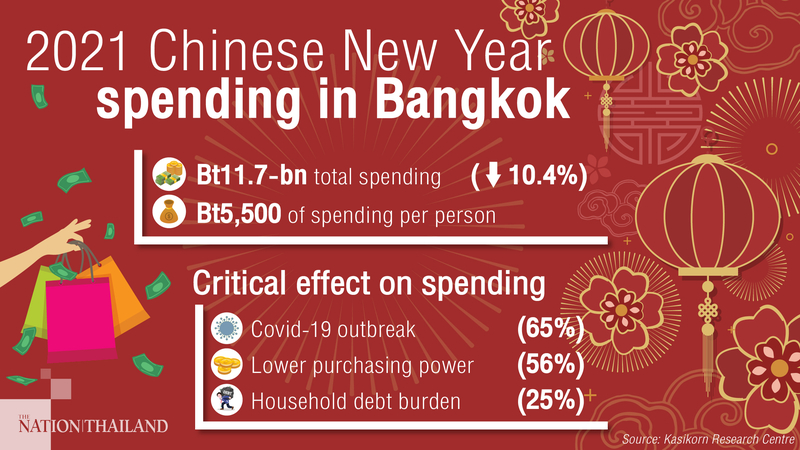 Covid-19 is a major factor that is pressuring Chinese New Year spending in Bangkok, leading to an expected 10.4 per cent decline in spending this year, Kasikorn Research Centre said.

Money spent in Bangkok during the Chinese New Year festival this year should total approximately Bt11.7 billion – a 10.4 per cent decrease compared to the previous year, the centre said.

The effects of Covid-19 have forced Bangkokians to go in for ready-made offerings via online channels or call-to-order stores for deliveries – more than in previous years.

The survey found that 43 per cent of Bangkok’s residents were interested in purchasing pre-made offerings, up by 22 per cent compared to the previous year. Most said online platforms responded to the immediate needs of especially the new generation.

The survey also found that most people in Bangkok are still not interested in buying offerings via online or call channels. More than 84 per cent are concerned about the quality of the offerings, especially meat and fruit, followed by 75 per cent who feel prices were higher when compared to purchases at shops, while more than 60 per cent think the variety of offerings are limited on online channels.

Therefore, the centre said, entrepreneurs need to respond to consumer behaviour, along with ensuring quality and value for money compared to products at physical stores.

The centre concluded that Bangkok's Chinese New Year celebration this year will "not be as busy as it should". Purchasing power has not yet recovered from last year as consumers have been hit by a new wave of Covid-19.