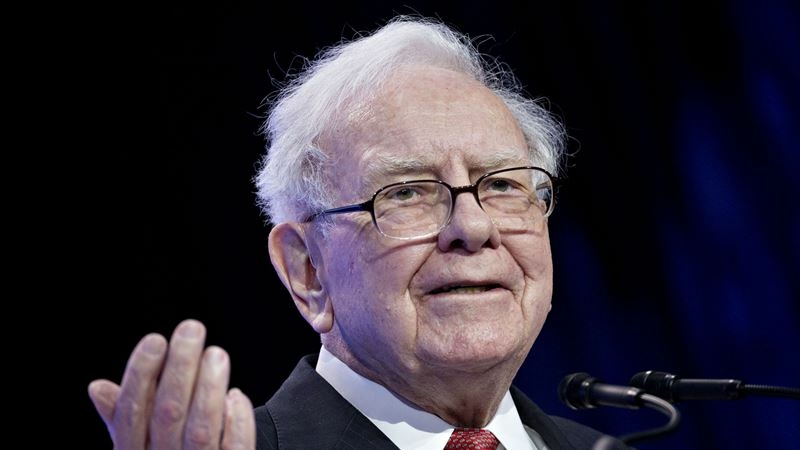 Warren Buffett has been a fixture at the top of the world's wealth rankings for decades, but in recent years he's slipped down the list as tech fortunes soared and his hot hand cooled.

The Berkshire Hathaway Inc. chairman's wealth jumped on Wednesday to $100.4 billion, according to the Bloomberg Billionaires Index. That makes Buffett the sixth member of the $100 billion club, a group including Jeff Bezos, Elon Musk and his friend Bill Gates.

The clan's combined fortunes have grown rapidly, fueled by government stimulus, central-bank policy and the surging equity market. On Wednesday, President Joe Biden's $1.9 trillion Covid-19 relief bill cleared its final congressional hurdle as the House voted to approve the legislation, adding to the $3 trillion or so in stimulus Washington has already disbursed in the past year.

Berkshire, the source of virtually all of Buffett's wealth, has had a fast start to 2021. The firm's A shares are up 15% this year, outpacing the 3.8% gain of the S&P 500 Index. That's been helped by Buffett's recent push to spend record amounts buying back Berkshire's own stock, a notable shift for an investor who has preferred to use the $138 billion cash pile to buy other businesses or common shares.

Buffett's been struggling in recent years to find sizable deals to spark Berkshire's growth, partially due to the sheer size of the conglomerate. That's caused the shares to underperform the S&P 500 over the past five years. But in 2020, Buffett spent a record $24.7 billion on buybacks and filings indicate he's already bought at least $4.2 billion worth of stock through mid-February.

"His warming up to share buyback was clearly welcomed by investors," said Bloomberg Intelligence analyst Matthew Palazola, who also noted last year's fears of the pandemic's initial impact on the group were overdone. "The strength of Berkshire's equity portfolio, specifically Apple, was a large contributor to book value," he said.

Surpassing $100 billion is all the more notable considering how much the Omaha billionaire has given away. A co-founder of the Giving Pledge, a campaign to encourage philanthropy, Buffett has donated more than $37 billion in Berkshire stock since 2006. Without those gifts, which have cut his holdings of Berkshire Class A shares nearly in half, he'd be worth more than $192 billion.

The staggering amounts accumulated by the ultra-wealthy -- $1.8 trillion by the world's 500 richest in 2020 alone -- highlights the K-shaped recovery that's taking place as the U.S. emerges from the pandemic. While millions of disproportionately poor, working-class and minority people remain unemployed, the rich have seen incomes and net worth levels jump thanks to a buoyant stock market and rising home prices.

Meanwhile, more than 8 million Americans -- including many children -- fell into poverty in the second half of last year, according to an analysis by University of Chicago economist Bruce Meyer, University of Notre Dame's James Sullivan and Zhejiang University's Jeehoon Han.

Buffett added $1.9 billion to his fortune on Wednesday as Berkshire Class A shares hit a record high, helping lead a second day of gains for the S&P 500.