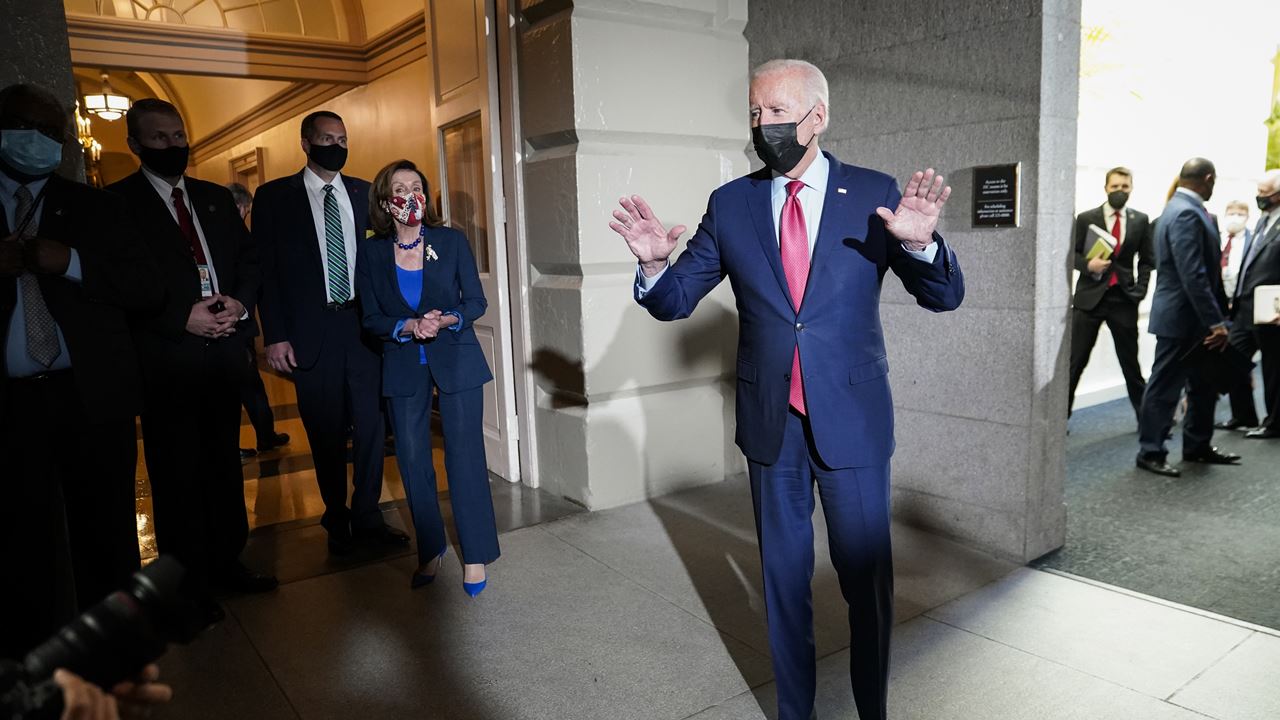 WASHINGTON - At one point during a private 90-minute Zoom call with liberal lawmakers on Monday, Rep. Ro Khanna, D-Calif., asked President Joe Biden why he had not simply locked Sens. Joe Manchin, D-W.Va., and Bernie Sanders, I-Vt., in a room and forced them to cut a deal on the Democrats economic package.

Smiling back at Khanna, Biden said, "Ro, that would be like asking for a homicide," according to two people on the call who spoke on the condition of anonymity to describe the private exchange.

Biden's joking response underlined a serious fact: He faces daunting difficulties in the coming weeks now that the recent dramas over his economic plans have left him just a few weeks to salvage his agenda, right his presidency and tackle problems that in some cases were years in the making.

Democrats are pushing to pass his infrastructure bill by month's end, following recent setbacks on the Hill, along with a broad safety net package. The two bills include major climate provisions that Biden wants to tout at a global climate summit next month, and Democrats also want something to show Virginia's voters before their Nov. 2 vote for governor.

"If we don't pass one of those before the gubernatorial election, it's a huge, huge mistake," said Sen. Mark Warner, D-Va., referring to the infrastructure bill and a separate measure to boost U.S. science and research, both of which have passed the Senate but not the House. "We've got two major wins - two major bipartisan wins. . . . Let's get at least one if not both of those wins for the president on the board."

A recent deal with Senate Republicans, meanwhile, staved off a disastrous government default until December, but at the cost of ensuring that a politically explosive debt-limit fight will unfold as the White House is struggling to push through the other bills.

This upcoming stretch may be Biden's last chance to revive a presidency that has suffered major blows in recent months. Since being rocked by the Afghan withdrawal and the surging delta variant over the summer, Biden's approval rating has fallen steadily, hitting a low of 38% in the latest Quinnipiac poll. Some of the campaign pledges that inspired Biden's supporters, from voting rights to immigration reform, have fallen by the wayside. A jobs report on Friday suggested the economy has been slowed down by the delta variant.

Beyond that, the coming weeks will tell whether Biden's central message - that America's democratic system can still tackle big problems - will hold true. Even if the president cannot push through his major goals by month's end, he faces enormous pressure to show at least some progress, with White House aides looking at the months leading up to Christmas as a crucial window.

To make that happen, Biden is gambling on the freewheeling negotiating style reflected in his crack about Sanders and Manchin, which was first reported by CNN. His style features banter and light teasing between the president and members of Congress he has in many cases known for decades, coupled with attempts to lay out priorities and nudge lawmakers toward compromise.

If he does succeed, the payoff could be significant. The infrastructure bill and safety net package combined would represent the biggest federal investment in the economy in decades, and polls suggest they are popular. Terry McAuliffe, the Democratic nominee for Virginia governor, is among those publicly pushing for the bipartisan infrastructure legislation to be quickly enacted to show that Washington can still deliver results.

"We're going to try to move as quickly as we can," said Senate Finance Committee Chairman Ron Wyden, D-Ore., who is overseeing major revisions to the tax code and health-care programs. "This is going to be a window when people are really going to see who's focusing on them."

Conversely, without action, the expanded Child Tax Credit, which has become a staple of the administration's economic message, will abruptly cut off at the end of December, depriving millions of parents of expected payments.

Biden has become heavily involved in the discussions over how to wage these fights, and is now devoting much of his daily schedule to his legislative priorities, aides say.

The president is briefed almost every morning on the negotiations by senior aides in the Oval Office and receives multiple updates throughout the day. Louisa Terrell, who heads the White House Office of Legislative Affairs, often attends those meetings, along with National Economic Council Director Brian Deese, White House Domestic Policy Council Director Susan Rice and longtime Biden aide Steve Ricchetti, who serves as counselor to the president.

Aides say Biden's approach is to encourage Democrats of all ideological stripes to describe what would enable them to sign onto a deal, rather than trying to coerce them into supporting the president's blueprint.

"President [Barack] Obama's attitude was: 'Here's what we think.' Biden is a little more like, 'What can we do? How can we meet you?'" said one administration official who has worked with Biden for years, speaking on the condition of anonymity to reflect private conversations. "It's all about hearing where the other person is coming from."

That approach is mirrored by the president's top advisers. Ahead of meetings, congressional aides often plan how best to elicit approval from White House officials on a particular position, according to multiple people involved in the negotiations.

But the officials - including Terrell and Deese - are often scrupulously poker-faced and elusive about Biden's personal convictions, as well as their own beliefs, on issues that divide Democrats, the people said, often to the frustration of people on Capitol Hill.

"They are really good at not showing their cards, and it leaves you with the impression they're just trying to piece it all together," one of the aides said.

Phil Schiliro, who served as Obama's director of legislative affairs, said such talks can get highly emotional. "It seems very contentious from the outside - feelings can run high and it feels like it might not happen," said Schiliro, who was involved in the high-pressure talks over the Affordable Care Act. "But if the conversations behind the scenes are happening the right way, there's an ability to reconcile differences."

Arguably, though, the president has little to show thus far for his strategy. Congressional Democrats have struggled for months to reach an agreement, and the possibility remains that Biden's entire agenda could collapse amid internal sniping.

Those frustrations spilled into the open this week with an extraordinary back-and-forth between Manchin, a moderate and one of the Democrats' key holdouts on the safety net bill, and Sanders, a democratic socialist and a leader of the party's liberal wing.

On Wednesday, Manchin reiterated his belief that the bill should not exceed $1.5 trillion, saying he did not believe that "we should turn our society into an entitlement society." That prompted a blistering response from Sanders, who continues to back the $3.5 trillion bill.

"Is protecting working families and cutting childhood poverty an entitlement?" Sanders asked at a news conference. After reeling off a list of similar rhetorical questions, he added, "Perhaps most importantly, does Senator Manchin not believe what the scientists are telling us, that we face an existential threat regarding climate change?"

The increasingly public warfare underscores not only the yawning financial gap Democrats must bridge in short order, but also fundamental differences about what issues to prioritize among a very long list. The bill currently includes a variety of priorites from universal pre-kindergarten care to tuition-free community college, and from new Medicare benefits to climate provisions.

Many Democrats believe they could lose the House in 2022 and not have another opportunity to enact their agenda for years, further ramping up the pressure to deliver results now.

Senate Majority Leader Chuck Schumer, D-N.Y., is pressuring fellow Democrats to agree on a framework for the safety net package in a matter of days, so it and the infrastructure bill can be passed by the end of this month. The infrastructure bill has bipartisan support, but Democrats will have to push the safety net bill through the Senate with only Democratic votes, using a complex parliamentary procedure called reconciliation.

Some Democrats are signaling they do not necessarily feel bound by party leaders' rapid timetable.

"Obviously, this is an enormously complicated and consequential bill," Sanders said at the news conference. "The American people are not calling my office saying, 'You've got to do it by Thursday or by next Monday.' What they are saying is, 'Make sure that we continue to have the $300 payment for our kids. Make sure that you can expand Medicaid. Make sure you deal with climate.' "

As they battle over the size of the legislation, Democrats are also debating how to structure the benefit programs so they fit under the final cap.

Manchin argues forcefully that Democrats should impose income limits on programs like the Child Tax Credit, so that wealthier households do not receive benefits they may not need. But if the Child Tax Credit is adjusted that way, it could violate Biden's pledge not to raise taxes on households earning less than $400,000 per year, while adding administrative complications to a program still in its infancy.

Some liberal lawmakers, in turn, have floated the idea of funding some new programs only for a set number of years, which in theory would lower their costs. The liberals hope, however, that the programs will prove so popular that Congress would be forced to extend them later. But some centrist lawmakers are balking at that accounting strategy.

Biden's challenge is that both wings of the Democratic Party believe they have already been forced to yield too much. Centrists complain that the president has taken the liberals' side by tying the infrastructure package to the far more liberal safety net bill.

"If Biden thinks he's adopted a middle course that should leave people equally happy, he has misjudged the situation," said Bill Galston, a former domestic policy official in President Bill Clinton's administration. "The prevailing view of the centrists is the president has tilted decisively in the other direction. There's not a lot of joy in Mudville."

Liberals are rankled that after they agreed to cut down the size of the safety net package significantly to $3.5 trillion, they are now being told they must reduce it much more.

"There is nothing superfluous in the agenda. Every dollar is needed to deliver millions of good-paying jobs, affordable child care and health care, and a clean energy future," said Lindsay Owens, executive director of Groundwork Collaborative, a left-leaning group.

If Biden has one weapon in his arsenal, it's the recognition by many Democrats that if his agenda collapses, it could be devastating for the party in the 2022 midterm elections and beyond.

Democrats above all else are trying desperately to avoid what happened with President Donald Trump's pledge to repeal the Affordable Care Act in 2017. That effort bogged down the congressional Republican majority for months, and when then-Senate Majority Leader Mitch McConnell, R-Ky., finally brought a repeal provision to the floor for a vote, it was defeated in a major embarrassment.

Democratic pollster Celinda Lake said that passing major, substantive legislation is particularly important to two groups of voters - women who swing between the two parties and Democratic voters who often may not to turn out to vote.

"Both of those groups really want something done," Lake said. "And the White House knows that."