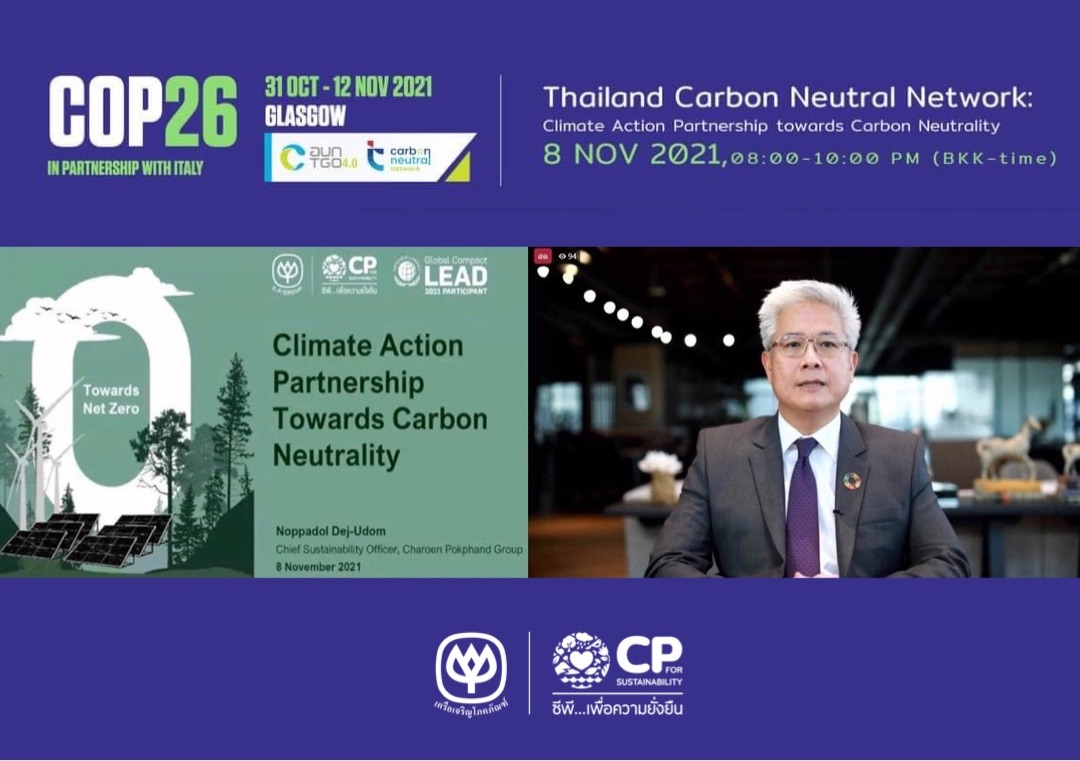 At the COP26 parallel summit organised by Thailand, Charoen Pokphand (CP) Group’s CEO Supachai Chearavanont announced that his company was ready to become a “net-zero” organisation by 2030.
Alongside the 26th United Nations Framework Convention on Climate Change (COP26) in Glasgow, Scotland, Thailand held the virtual “Climate Action Leader Forum 2021”. This forum brought together business leaders, state and private agencies as well as other institutions to share their visions on net-zero transformation and pursue the goal of keeping
global temperature from rising above 1.5 degrees Celsius.
At the forum, Supachai said the business and industry sectors were facing serious problems from climate change, which is also affecting food security for a rising population.

He said production waste and greenhouse gas emissions will continue rising, this unstoppable trend is forcing industries to become sustainable and move towards zero-emission options.
He added that as a member of the UN Global Compact Lead, CP has set its goal to become a Zero Food Waste and Zero-Emission organisation by 2030.
Supachai said the company has already put in motion preparations to achieve this goal, including creating new opportunities in the renewable energy industry. He said the CP Group’s business model has been adapted to a sustainable business model from many dimensions, both in retail and telecommunications, as well as business operations in 21 countries and economic zones. As for the agriculture industry, CP is working to introduce sustainability throughout the supply chain.

The CEO also said many businesses have come up with innovations that make manufacturing economical and more sustainable such as smart farming, automated production processes, use of renewable energy as well as the development of various platforms and solutions. The CEO said these innovations are a key resolution to this crisis.
“We may be questioning what we do today as we have not seen clear results, but doing the right thing does not need to be evaluated with numbers. The way humans consume and use natural resources nowadays has created greenhouse gases and waste, all of which are not sustainable,” he said.
“I believe there are opportunities in every crisis. In this climate change crisis, we have the opportunity to build sustainability to deal with the impact of climate change on the world. Therefore, the business sector should seriously invest, not just in renewable energy but also in other relevant technologies. We must continue to take responsibility for not emitting more emissions and continue improving ourselves to move towards the net-zero goal. The CP Group hopes to continue sharing lessons and successes in sustainable business development with relevant industries,” Supachai said.
Noppadol Dej-Udom, CP’s chief sustainability officer, who was also at the forum, said all businesses under the CP Group have agreed to work together to help keep global temperatures from rising above 1.5 degrees Celsius. He said each business has implemented projects to reduce greenhouse gases throughout the production chain, from the acquisition of raw materials via precision technology and efficient use of fertilisers to turning waste into energy.

As a result, Noppadol said, CP Group’s total emissions are low compared to the global industry average.
He put CP Group’s success down to five formulas created based on the CEO’s guidelines, namely:
• Setting clear goals that help everybody understand that climate change is an important issue and that steps must be taken immediately to save the planet.
• Reporting all details related to carbon emission to the public transparently.
• Using market mechanisms as a motivation to reduce greenhouse gas emissions for businesses and consumers.
• Applying technology and innovations to business operations, including the use of renewable energy, carbon capture and storage.
• Boosting cooperation between sectors to jointly find solutions that will bring carbon emissions to net-zero.