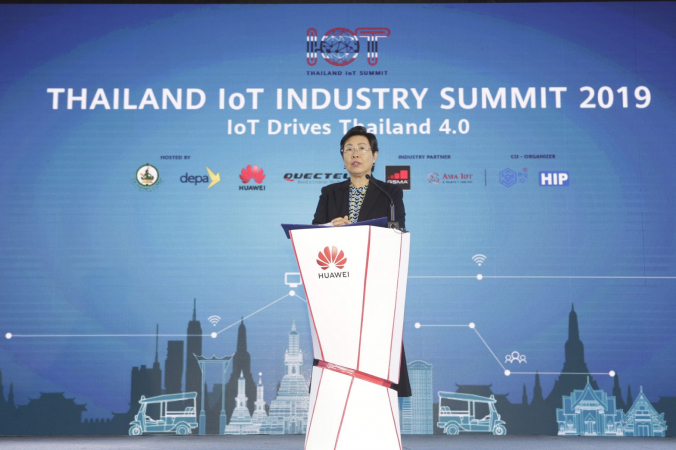 The government has launched a white paper on the Internet of Things (IoT) industry to drive the country's digital economy.

The “Thailand IoT Industry White Paper” was jointly released during a meeting on Wednesday (August 7) in Bangkok. The white paper outlines the framework of Thailand’s IoT technologies, ecosystem and application, which would guide the development of the IoT startups and stimulate the digital economy in the country.

The white paper was released during the Thailand IoT Industry Summit, hosted by the Ministry of Digital Economy and Society, the Digital Economy Promotion Agency, Quectel and Huawei.

Under the theme “IoT, the Engine of Thailand 4.0 to Drive Digital Economy", the summit brought together more than 300 government officials, international organisations, leading operators, industry experts, and partners to share cutting-edge IoT innovations, and explore their contributions to Thailand 4.0 and the digital economy.

“IoT is an important engine for promoting the Thailand 4.0 initiative and will accelerate the digital transformation of Thailand from smart city, smart industry, and smart life. We believe IoT will play a crucial role for our digital economy development, and therefore improve our people’s lives,” said Ajarin Pattanapanchai, permanent secretary at the Ministry of Digital Economy and Society.  In Thailand, IoT has become as an important engine for digital transformation and produced good social and economic values, she said. Companies like AIS and True Corporation have rolled out their NB-IoT across the country. Motor tracking, caring for kids and smart parking are already at a commercial stage. Innovations such as smart meter and connected cow have also entered trial stage in Thailand.

During the summit, Huawei Thailand officially released its OceanConnect IoT Platform, an open ecosystem built on IoT and public Cloud, which would help local SI partners to be quick IoT developing and faster time to market.

“Today, digital, innovation and technology bring revolutionary and disruptive change to our lives at a pace and on a scale that are unprecedented. Huawei contributes to Thailand's IoT ecosystem and development by supporting Thailand SI partners, integrating of IoT alliance community for both local and global partnership, and leading more use cases from global to local Thailand,” said Abel Deng, deputy managing director of Huawei Technologies (Thailand).

According to GSMA Intelligence, there are 114 mobile IoT commercial networks launched globally as of May 2019, and the total global IoT connections may rise to 25 billion by 2025. GSMA Intelligence estimates that the Asia Pacific region will be the largest region in terms of revenues hitting approximately $386 billion (Bt11.9 trillion) while global IoT revenue will quadruple to $1.1 trillion in 2025, driven by government promotion and strong industrial IoT connection growth.

“We look forward to seeing an accelerating IoT industry in Thailand with more collaborations to drive the digital economy and Thailand 4.0,” said Abel Deng.