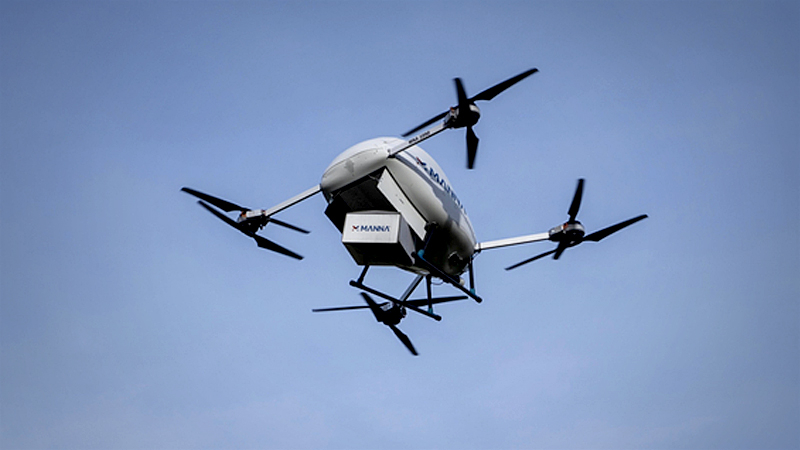 In the suburbs of Dublin on a windy, overcast day in January, several alumni of Airbus and the U.K.'s Royal Air Force watched as a flying object, shaped a bit like a crouching frog, hovered about 10 meters (33 feet) up in the air.

The craft, called MNA-1090, opened its cargo bay door, and lowered a package — about the size of a shoebox — to the ground on a string. The robotics engineers who'd helped design the vehicle opened the carton, looked inside, and smiled: the dozen-or-so pots of Ben & Jerry's ice cream were still perfectly frozen.

In late March, customers on the outskirts of Dublin, far from the dense metropolises that make services like Uber Eats and Deliveroo viable in terms of revenue, will get to try ordering food and drink the same way.

Manna.aero built the MNA-1090 drone to be an airborne replacement for the human-and-bicycle formula used the world over by food-delivery apps, and is preparing to run a couple of hundred test flights per day over several weeks to lay the groundwork for a permanent service for small Irish towns. Ben & Jerry's, U.K. food delivery firm Just Eat, and local Irish restaurant chain Camile Thai are signed up to participate in the pilot that will take place at the University College Dublin campus.

"In five years, it's going to be the most normal thing you can imagine," Manna Chief Executive Officer Bobby Healy says.

If you live in a city, having a hot meal delivered to your doorstep in under an hour has never been easier or cheaper. For about the price of a small coffee, a human being will cycle to a restaurant, collect your freshly baked pizza and bring it to your apartment. Innovations in smartphones, mapping and gig-economy logistics have catalyzed growth of the sector, which research firm Frost & Sullivan estimates will be worth $200 billion by 2025.

But the margins are tiny for the companies handling the delivery, and the competition fierce. In October, Grubhub Inc. executives told shareholders they didn't believe it was even possible to generate significant profit from food delivery. The cost of paying people to drive food around was just too much, they said.

Companies are looking for an alternative, and a roster of investors believe Healy might have a model that could work: a drones-as-a-service for restaurants and delivery apps.

Here's how Healy said it will work: Manna will partner with restaurants or food courts that have a high-throughput of orders and a small outdoor space to house a drone-loading team. The Manna craft itself is about the size of a computer printer and will carry meals weighing around 2 kilograms (4.4 pounds) more than 2 kilometers (1.2 miles) in under three minutes, even in wind and rain.

Upon arriving at its destination, the drone will hover and wait for the customer to accept delivery using an app, having indicated when ordering exactly where they want their food to land — on the lawn, an outdoor dining table or just in the driveway. The drone will descend and lower the food parcel that, Healy said, will still be "piping hot."

Manna's vehicle has been designed to travel for 100 million hours without a problem, Healy said in an interview. But, alongside space for three 10-inch pizzas, it also has a backup battery and two parachutes, just in case.

The 51-year-old Irish entrepreneur is a mobility veteran: In 2003, he sold off travel software firm Eland Technologies to industry titan Sita.Aero. He then helped build CarTrawler into a transportation platform used by more than 100 international airlines. Healy's got some well-known names putting $5.2 million behind Manna, including billionaire Peter Thiel's Founders Fund, Dynamo venture capital, and FFVC, among others.

For food platforms, Manna says the service is more than just a gimmick — it will lower delivery costs and allow them to scale to currently under-served suburban areas in a profitable way. Healy said Manna's drone delivery will cost platforms $3 to $5 per delivery.

Fabricio Bloisi, CEO of online delivery platform iFood in Brazil, said the use of drones is a "great breakthrough" for the industry because of their efficiency and ability to travel relatively large distances. He said his company's working with Sao Paulo-based Speedbird to reduce delivery time by combining the use of drones with bicycles and motorbikes.

Uber's testing a drone for food delivery in the San Diego area, and Alphabet Inc.'s Wing is already delivering coffee, food, medicine and household items directly to homes in Finland, Australia and the state of Virginia.

Amazon.com is also developing its Prime Air service, with a view to delivering parcels, not necessarily food, of up to five pounds via drone. The company's bidding for a stake in the U.K.'s Deliveroo.

Healy isn't worried. He's pitching Manna as a business-to-business company, where its drones are used by food delivery companies, not end consumers. To the entrepreneur, Wing isn't his rival. "We're arming their competitors."

Still, not everyone is so rosy about the drone delivery trend. In a sign of how divided views are on the technology, Dutch food delivery firm Takeaway.com — which recently bought Just Eat, one of Manna's partners for the March pilot — said it thinks drone delivery for food is a "fantasy."

"We just don't see any way how it can work currently from a technical perspective," said Joris Wilton, a spokesman for Takeaway. "We will not be investing in developing it in-house."

Miki Kuusi, co-founder and CEO of Helsinki-based food delivery company Wolt, said his company has tested drone deliveries, but, "it's been more PR than actually about a business case."

That partly has to do with complexities around picking up the food orders, he said. Drone services have to be deeply integrated with the restaurants to ensure that drones are loaded in the right way, something "most restaurants in a hectic environment are not equipped to do."

Then there's the tricky issue of regulation. Airspace authorities have tightened restrictions on drone usage as their popularity with consumers and troublemakers has grown. People also express discomfort at the idea of machinery whizzing above their homes — both for privacy and safety reasons. Add to that the complexity of hauling hot food in the sky over several kilometres and it's an uphill battle for any startup to launch a service.

Healy recognizes that changing the industry won't come overnight, given the need to safely test the technology, get approvals from regulators at each new stage as well as from the local communities.

Still, he expects to have completed between 20,0000 and 50,000 successful deliveries by year-end.

"With this industry it's 'crawl, walk, run,'" Healy said, "and we want to crawl for a little while, we want everyone to feel good about it."