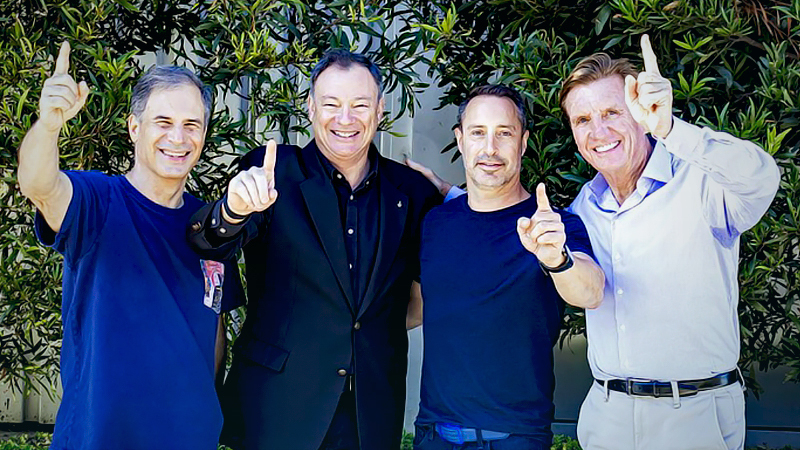 Two are grandfathers, the other has three young children. All three are extremely wealthy, with the means to pay the $55 million ticket price for an eight-day stay on the International Space Station. They are the first would-be spaceflight crew comprised entirely of private citizens in a mission to the station.

Sometime early next year, if all goes according to plan, the trio - Larry Connor, the managing partner of the Connor Group, a real estate investment firm based in Ohio; Mark Pathy, the chief executive of Mavrik Corp., a Canadian investment firm; and Eytan Stibbe, a businessman and former Israeli Air Force fighter pilot - will lift off from the Kennedy Space Center aboard a SpaceX Dragon spacecraft for what is scheduled to be an eight-day stay on the International Space Station.

Accompanying them will be Michael López-Alegría, a former NASA astronaut who flew to space four times and is now a vice president of Axiom Space, the Houston-based company that is coordinating their trip to space. López-Alegría is overseeing their training and will serve as the mission's commander.

If it takes place as envisioned, the flight would mark a watershed moment in human space flight, one that according to Axiom, which announced the identities of the three paying passengers on Tuesday, will eventually make space more accessible and further erode the monopoly that governments have long held on space travel. The company is planning two flights per year and also is developing a space station of its own that NASA hopes may one day replace the International Space Station, the orbiting lab that has been in space for 22 years.

"This is just the first of several Axiom Space crews whose private missions to the International Space Station will truly inaugurate an expansive future for humans in space - and make a meaningful difference in the world when they return home," Michael Suffredini, Axiom Space president and chief executive, said in a statement.

Over the years, several wealthy private citizens have flown to the space station before - but on the Russian Soyuz craft because NASA forbade the practice on flights from U.S. soil. In 2019, NASA reversed its stance, saying the missions would help boost a growing commercial space industry as well as help NASA's bottom line. The space agency charges $35,000 a day per passenger for food, storage and communication during stays on board the orbiting laboratory - a total of $840,000 for three people for eight days.

"But it won't come with any Hilton or Marriott points," Jeff DeWit, NASA's former chief financial officer, said at the 2019 announcement of the policy change.

Pathy, who has three young children, has a lifelong passion for space but didn't think he would ever be able to go until a friend told him about the Axiom missions. His initial reaction was skeptical.

"I wasn't sure it was completely real, and I'd never heard of this company, Axiom," he said. "I obviously was not going to blast off in a rocket if this was some sort of Mickey Mouse travel outfit. But the more I inquired and the more I spoke with them directly, the more I realized they were the real deal. It was really possible. And that moment where you think, 'Holy cow, this is something I could actually do,' it's a bit of a surreal moment."

Flying private citizens to space is a goal that NASA has had for years. At the beginning of the space shuttle program, it envisioned offering seats to private citizens and started a "Spaceflight Participant" program. A couple of members of Congress flew first, Sens. Jake Garn, R-Utah, and Bill Nelson, D-Fla., but then NASA selected a teacher - Christa McAuliffe, who taught history in Concord, N.H. Next, a journalist was to go, then perhaps an artist.

The program ended, however, after the space shuttle Challenger exploded shortly after takeoff, killing McAuliffe and the other astronauts on board. The agency decided spaceflight was too risky for ordinary citizens.

In an op-ed in The Washington Post two days after the disaster, Michael Collins, who flew to the moon with Neil Armstrong and Buzz Aldrin aboard Apollo 11, seemed to take aim at NASA's efforts to send civilians to space as cavalier, warning that PR stunts can't overcome the punishing force of physics.

"I have been expecting something like this for 20 years," he wrote of the Challenger disaster, which took place on a cold morning 35 years ago Thursday. "Anyone who has lived with large rocket engines understands that their awesome power is produced by machinery churning away at very high temperatures, pressures and velocities. A thin and fragile barrier separates combustion from explosion."

In interviews with The Post, the crew of the Axiom flight said they were well aware of the risks and were taking the flight seriously. Within the ranks of the professional astronaut corps, there may very well be skepticism, if not outright objection, so their goal is to prove their merit through conviction and a humble dedication the endeavor deserves.

"There will definitely be some resistance," said López-Alegría, who spent 20 years as a NASA astronaut and holds the record for the most spacewalks. "I think it's our job to win them over. We can do that certainly by being as prepared and expert as possible. And so, my goal is to get those guys to the point where no stone is unturned. And when they get on board station, the crews are pleased, maybe pleasantly."

That was his experience when in 2006, he flew on the Soyuz with Anousheh Ansari, who reportedly paid about $20 million for the experience. But at first, he was dubious, thinking she was a dilettante.

"I think the hesitancy was natural when you come from a background as a military pilot and then spend your whole career studying to want to be an astronaut, and then somebody kind of cuts the line, if you will," he said. "It was a little hard to swallow."

But what won him over was her "consummate professionalism" and the fact that she wrote a blog from space. "Millions of people were reading it," he said. "These are people that otherwise wouldn't have cared less about what was going on in human spaceflight. And that idea of sharing the experience really hit home for me."

Stibbe, who flew combat missions for the Israeli Air Force and is the founding partner of an investment firm, is well aware of the risks, especially because he was close friends with Ilan Ramon, Israel's first astronaut, who died in 2003 when the space shuttle Columbia came apart over Texas on reentry. He serves now on the board of a foundation created in Ramon's honor. As for his flight, Stibbe said, "Obviously there's some fear, and this is definitely extreme. And then there are risks, and I'm aware of the risks."

Connor said he wanted to leave a good impression so that others might follow in his footsteps. "We have a vital responsibility as a first group of private astronauts to do this thing correctly so that we don't end up being the last group," he said.

They embrace the challenge wide-eyed, they said, chastened by past disasters, aware of the risks, but bullish on the benefits. Private citizens in space would not only bring attention to the space program but allow them to do research on board the station, raise awareness of science and math activities in their communities, and give their already robust philanthropic efforts a cosmic boost.

They are aware, too, that there are problems on Earth that need to be addressed and that spaceflight is viewed by much of the public as a superfluous indulgence, especially during a pandemic and an economic crisis. The crew members say they see the flight as an enhancement of their other philanthropic efforts.

"There are a lot of issues - adversity, and in some regards, crises, here, not only in the U.S., but worldwide," Connor said. "And those absolutely need to be a priority. But we cannot forget about the future. We cannot forget about having long-term visions . . . and hopefully this mission and the research we're going to do is going to be one small step on that journey."

In space, he said he does "not want to be a spectator. This is a once-in-a-lifetime opportunity. I want to do something of value and how that translates into research and experiments."

Connor is collaborating with the Mayo Clinic and Cleveland Clinic on research projects. He also intends to teach lessons to students at Dayton Early College Academy, a K-12 charter school with 1,300 students, 75% of them from low-income families.

Pathy is working with the Canadian Space Agency and the Montreal Children's Hospital on health-related research projects. And Stibbe plans to conduct scientific research coordinated by the Ramon Foundation and the Israeli Space Agency.

Their mission comes at a significant time for human spaceflight. Last year, SpaceX flew the first NASA astronauts to the space station from U.S. soil since the space shuttle was retired in 2011 - the first launch of humans into orbit by a private company, not a government. It flew another mission in November and is scheduled to fly more this year. Boeing also intends to fly NASA astronauts to the station this year.

Richard Branson's Virgin Galactic and Jeff Bezos's Blue Origin are planning to fly paying customers to space, as well. Those missions are not intended to go into orbit but rather to the edge of space, coming back down after giving passengers a few minutes of weightlessness. (Bezos owns The Washington Post.)

Those trips, although still expensive, cost far less than trips to the space station. Virgin charged $250,000, although that price probably will go up in the short term. Blue Origin has not yet announced prices.

Pathy and Connor traveled to Cape Canaveral last year to witness SpaceX's first launch of astronauts. It was the first time either of them had been to a rocket launch, and both said they were awestruck.

"You feel that sound in your chest," Pathy said. "And for me, especially, I'm thinking that was going to be me in a few months. It was a really exciting and intense experience."