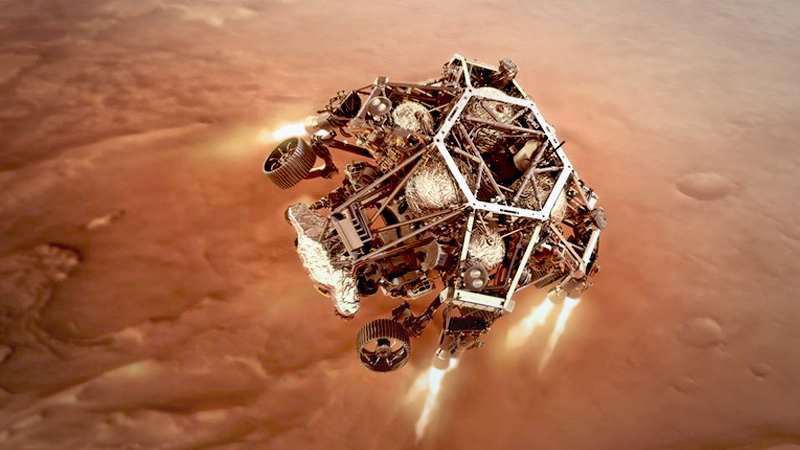 They call it the "seven minutes of terror," which doesn't do justice to the weeks of anxiety, troubleshooting, second-guessing, sleepless nights - the mental cataloguing of all that could go wrong and all that must go exactly right. One cataloger is Matt Wallace, deputy project manager for NASA's Perseverance rover mission. He has a simple way of describing what the space agency expects him and his fellow engineers to do: "Land a car on Mars."

This is one of the hardest technological feats human beings have ever attempted. The spacecraft carrying Perseverance, which launched from Earth at the end of July, is expected to arrive on Thursday at Mars at 12,000 miles per hour - six times faster than a bullet shot from an M16 - in what amounts to a controlled collision. Somehow, that velocity has to reach zero, with the rover deposited lovingly on the surface inside a crater named Jezero.

Hitting the 4.8-mile-wide landing site targeted by NASA after a journey of 300 million miles is akin to throwing a dart from the White House and scoring a bull's eye in Dallas.

This is one of NASA's most important endeavors, the first multibillion-dollar Mars mission in nine years and the initial phase of a three-mission campaign to return samples of Martian soil to Earth. The rover is poised to land just days after two other robotic spacecraft, launched by China and the United Arab Emirates, reached Mars and went into orbit.

Perseverance will do more than probe the surface: It will also test technologies that someday could be used on Mars by astronauts, including a system for converting atmospheric carbon dioxide to oxygen. NASA's human spaceflight program aims for a return mission to the moon in coming years, but Mars remains the horizon goal.

NASA describes this as an astrobiology mission. Perseverance has instruments that might detect structures consistent with ancient life on the Red Planet. Or those instruments might detect nothing remotely suggestive of life. Either way, NASA wants the soil samples back for study in laboratories, hoping to answer fundamental questions about life in the solar system and beyond. Finding a second data point for life would be one of the greatest discoveries in the history of science.

But first the engineers have to pull off the EDL - the entry, descent and landing. It is the hardest part of the mission, fraught with opportunities for what aerospace engineers call "a bad day." The EDL requires a heat shield, a parachute, rocket thrusters and a sky crane that finally lowers the rover to the surface. All these things have to work with exquisite precision and entirely autonomously.

"We're basically watching the spacecraft disassemble itself as it's hurtling toward the ground," Wallace said. "Success depends on everything going right, down to fractions of a second. There's no go-back, no retry."

Humans have been exploring Mars robotically for more than half a century, and roughly half the missions (including those operated by other countries) have failed. Spacecraft have simply vanished. Still, NASA has been on a roll with its rovers in recent years - first with Spirit and Opportunity, which landed in 2004, and then with the heftier Curiosity, which is still chugging along. When Curiosity touched down softly in 2012, the video of the "seven minutes of terror" and the wild high-fiving celebration at the Jet Propulsion Laboratory earned viral traffic on the Internet.

Past success does not guarantee future success. This time, the rover landing will be different in two key respects. First, there are more cameras involved, and it will be visually more appealing. Engineers will have multiple angles (with some time delay because of the 11 minutes it takes for a signal to reach Earth at the speed of light) on what the rover is experiencing as it lands on Mars.

Second, this is a much harder target. Curiosity in 2012 landed on flat terrain, the equivalent of a massive empty parking lot. Perseverance will attempt to touch down inside Jezero Crater, a 30-mile-wide basin crammed with boulders, gullies, cliffs and, most enticingly, the remnants of an ancient river delta with sediments that scientists hope will contain evidence of past life on Mars.

From a science perspective, that's a great target. Engineers view it differently.

"When I look at it from a landing perspective, I see danger," Allen Chen, the 41-year-old leader of the EDL team, said.

The spacecraft will have to use a new system, packed with artificial intelligence, to scan the terrain and match it with maps of Mars to try to pick out a landing spot. If all goes well, the autonomous decision-making of the spacecraft will ensure it is not stuck in deep sand, or dangling over a cliff, or perched on top of a boulder.

NASA engineer Swati Mohan and her colleagues developed the terrain relative navigation system after asking themselves: How do you give a robot a brain like the one in the skull of Apollo 11 astronaut Neil Armstrong? When Armstrong descended to the moon in the lunar module, the Eagle, he peered out the window to steer his spacecraft by the landmarks spotted below, dodging boulders and craters that could have spelled disaster.

The features of Jezero Crater that appeal to scientists - cliff faces, slopes, sand pits, rocks - "are the exact things that the engineers don't want to see in the landing site," Mohan said.

Like Armstrong, who memorized lunar maps, the robot is flying to Mars prepped with information and the ability to react.

"That's exactly the smarts that we put on board Perseverance. She can do it completely on her own during that entry, descent and landing," said Mohan, who during the landing will be at a microphone in mission control and calling the play-by-play.

As Perseverance descends, it will be guided by images taken by NASA's satellite, the Mars Reconnaissance Orbiter. The navigation system will kick in as the spacecraft is about 2.6 miles above the surface: A black-and-white camera will snap away, and the images will be compared against the set of maps loaded into Perseverance. Safe spots have been marked on the preloaded satellite map.

The space agency tested part of the camera system by strapping it to a helicopter flying over Death Valley, Calif., a decent analog to the Martian surface. This is the first time NASA will use this tool on another planet.

"My paranoia level is growing exponentially the closer we get to landing," Mohan said.

Mars is not a stationary object in the heavens - it orbits the sun, like any planet, and so it's a moving target for the spaceship.

Mars has a fiendishly unhelpful atmosphere - too thin to be of much use in slowing down a spacecraft but thick enough to cause problems with turbulence and overheating. The spacecraft will come screaming into the Martian upper atmosphere and use a heat shield to deflect the heat of entry.

That soon gets jettisoned but not before the spacecraft deploys a parachute that must open in less than a second. The parachute is the size of a Little League baseball infield, Chen said. The deployment is so violent that there's a risk the parachute will be shredded.

"You can turn into a confetti machine," Chen said. "That would be a bad day for us."

The scientific mission will unfold once the engineers have achieved their initial goal of landing a car on Mars. Jezero Crater was selected as the landing site because of the dried-up river delta that protrudes into the crater. Such terrain memorializes the era when Mars was warmer and wetter, and had flowing water at the surface.

The scientists want the rover to clamber up and down the hilly terrain of the river delta and eventually drive all the way out of the crater to get a view from the rim, a traverse of 15 miles. All of this will be in service of a still-more-ambitious project: the Mars sample return.

Perseverance has tubes for caching samples of Martian soil and rock. NASA hopes to stage a second mission to gather the samples and launch them into orbit, followed by a third mission to haul them back to Earth for study in laboratories. The latter two missions have yet to be fully authorized.

Landing in the crater is a high-risk, high-reward plan. Mars rovers have limited life spans - the planet's wild temperature swings rapidly age electronics. Earlier machines used up to two-thirds of that precious time moving to areas of scientific interest. Perseverance will land surrounded by interesting spots. NASA plans for the robot to cache sections of the delta deposits as well as hydrated silica, which on Earth can capture signs of ancient microscopic life.

After a successful landing, Perseverance will detach an autonomous helicopter from its belly, perhaps in the springtime. The helicopter, named Ingenuity and the size of a chihuahua, has a straightforward mission: It is essentially a "30-day tech demo to show that you can fly a helicopter on Mars," said Jennifer Trosper, a deputy project manager for the Mars 2020 mission.

If its rotors lift the tiny copter off the ground, Ingenuity will be the first vehicle to achieve powered flight on another planet - an extraterrestrial Wright Brothers moment.

The list of countries that have successfully landed a working long-lasting probe on Mars remains at one - the United States. That is about to change, in all probability.

Perseverance is facing something of a traffic jam around Mars. Two spacecraft - one from the United Arab Emirates, the other from China - that have been hurtling toward Mars for months hit the brakes to slow themselves down enough to enter Mars's orbit in recent days. The UAE's Hope spacecraft arrived Tuesday, followed by China's Tianwen-1 the next day.

The missions were a first for a pair of countries in the midst of beefing up their space programs, hoping to become forces in a space race long dominated by the United States. Though there have been a dozen landing attempts on Mars, the United States remains the only country to land and operate a spacecraft on the Martian surface.

NASA's track record is extraordinary - eight attempts with only one failure, the Mars Polar lander in 1999. Meanwhile, the European Space Agency is zero for two and Russia is zero for three, although in 1971, the Soviet Union's Mars 3 spacecraft landed on the surface and transmitted data for several seconds before going silent.

China, however, is becoming adept at landing spacecraft on faraway celestial bodies. In the past few years, China has deposited three spacecraft on the moon, including on the far side, which had never been done before. It also intends to launch the first modules of a new space station this year.

Tianwen-1 is its first Mars mission and consists of a spacecraft that would stay in orbit around the Red Planet and a rover that would land in the coming months. The rover is equipped with radar that would search for pockets of water under the surface.

The United Arab Emirates in recent years has built up its space program, hoping to diversify an economy long dependent on oil, inspire a new generation of scientists, and provide stability and hope in a region rocked by violence and turmoil.

Last year, the UAE sent its first astronaut to space, Hazza Al Mansouri, who spent eight days on the International Space Station and became a symbol of pride and the country's ambitions in space.

Its most ambitious project - the launch of the Hope spacecraft to Mars last year - reached the Red Planet on Feb. 9 and will study the Martian atmosphere. The spacecraft will not attempt a landing.

It is a big step for the UAE's space agency, which is partnering on the mission with scientists from the University of Colorado at Boulder's Laboratory for Atmospheric and Space Physics.

"We entered into this wild experiment," Sarah bint Yousef Al Amiri, the chair of the UAE Space Agency and the minister of state for advanced technology. "It was something completely new for us."