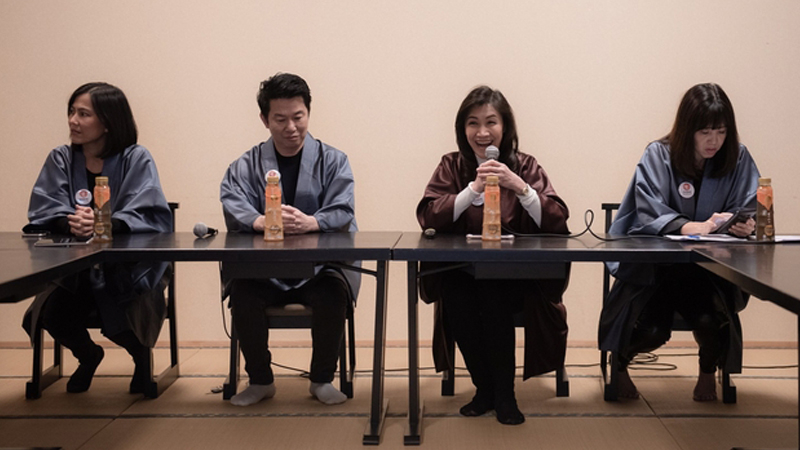 Oishi aims to drive growth with focus on core businesses

Oishi Group aims to focus on its three core businesses – beverage, restaurant, and ready-to-eat cuisine – as strategies to drive its sustainable growth in Thailand and other regions in 2020, Nongnuch Buranasetkul, the president and chief executive officer, said on Monday (January 20).

“This year, the company is still focused on the keys of success in 2019, namely, consumer-based expansion strategy, customer-based innovation development, and distribution channel extension,” she said.
She added that these core businesses will improve and develop themselves through the key initiatives of health and wellness, digital adoption, and sustainability.
Regarding the company’s beverage business, she said the overall market for bottled green tea has started to rebound after being impacted negatively by excise tax since 2017.

“However, consumption has not recovered to the same level as in 2017,” said Jesdakorn Ghosh, senior vice president of the beverage business. “The market value in 2019 and 2018 was Bt12.369 billion and Bt12.106 billion respectively, while the value in 2017 was Bt13.279 billion”.
“We aim to extend our consumer base for beverages to help generate revenue after being affected by the tax,” she added.
This year, the beverage section plans to expand its consumer base of high-quality products. Besides, it aims to expand overseas from 33 countries currently, while strengthening the main markets in Asean, especially Cambodia and Laos.
Previously, Oishi promoted its brand through Realm of Valor, an online game, targeting the engagement of those who aged between 13 and 24.
Meanwhile, the executive vice president of the food division, Paisarn Aowsathaporn, said that the concept to drive restaurant business was to build and maintain Oishi as “King of Japanese Food”.

He said this year restaurants under the company will increase to more than 26 branches nationwide.
The restaurant section also plans to develop spin-off brands to strengthen the company’s port.
“The premium ‘Oyoki’ soft-serve ice cream shop, which was launched last year, will open its second branch soon at Samyan Mitrtown department store,” he added.
The executive vice president also plans to rebuild the existing ‘Hou Yuu’ restaurant by expanding its branch and open ‘Sakae’ restaurant to serve those high-end customers.

Mekhala Nethipo, senior vice president of the packaged food business, said that the trend of instant foods remained strong and was showing continuous growth.
“We aim to strengthen our instant cuisine brand ‘Oishi Eato’ to make it more well-known to consumers and will reinforce the company’s leadership in ready-to-eat and ready-to-cook foods,” she explained.
She said that those instant foods will be improved in diversity and quality to attract more customers and to serve consumers’ needs.
Lastly, another aim of instant food this year was to extend its distribution channels from supermarkets and retail stores to hotels, cafés and restaurants, in Thailand and overseas.
Mekhala’s section will cover food-service providers through synergistic partnerships with other subsidiaries under Thai Beverage Group, she said.