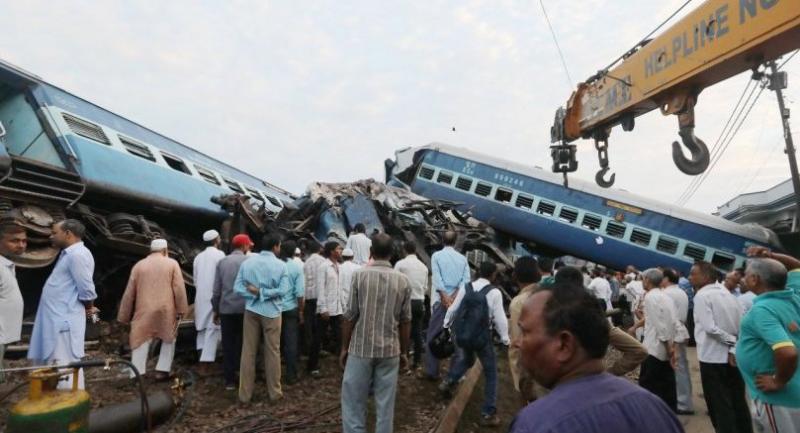 At least 23 dead, dozens hurt as train derails in India

NEW DELHI - At least 23 people were killed and dozens injured after an express train derailed in north India Saturday, officials said, as rescuers clambered across mangled carriages to pull passengers from the wreckage.

Emergency workers and crowds of local people rushed to the site where 14 coaches derailed near Muzaffarnagar district in Uttar Pradesh state, some 130 kilometres (80 miles) from New Delhi, the latest deadly disaster on the country's creaking rail network.
"Twenty-three people have died and 64 others are injured in the accident. Rescue and relief operations are continuing," G S Priyadarshi, Muzaffarnagar district magistrate, told AFP.
A police officer at the accident spot said 50 people had been taken to hospital.
Photographs and television footage showed twisted and upended coaches lying sideways as hundreds of people try to pull the passengers out.

Indian policemen and emergency crew stand next to the wrecage of a train carriage after an express train derailed on the evening of August 19 near the town of Khatauli in the Indian state of Uttar Pradesh, on August 20, 2017. // AFP PHOTO
"We are trying to take out the trapped people from the coaches," senior police officer Jitender Kumar told AFP.
Another official said metal cutters and cranes were being used to reach inside the damaged coaches as the federal government rushed dozens of rescuers with specialised equipment and sniffer dogs to the spot.
"Scores of people have been safely evacuated from the coaches. Some dead bodies have also been recovered," fire and emergency officer Naresh Kumar told AFP.
The train had left eastern Puri city on Thursday evening and was scheduled to arrive in northern Hindu holy city of Haridwar on Sunday.
The accident is the latest disaster to hit India's most populous state. It comes just a week after dozens of children died at a hospital that had run out of oxygen there.
Prime Minister Narendra Modi in a tweet expressed sympathies with the families of those killed and assured all possible assistance.
India's railway network is still the main form of long-distance travel in the vast country, but it is poorly funded and deadly accidents often occur.
Less than a year ago 146 people died in a similar disaster in Uttar Pradesh after 14 carriages of a passenger train came off the tracks.
More than 2,000 passengers were on the train when it flipped off the rails that left over 150 injured.

Indian policemen and emergency crew stand next to the wrecage of a train carriage after an express train derailed on the evening of August 19 near the town of Khatauli in the Indian state of Uttar Pradesh, on August 20, 2017. // AFP PHOTO
In January nearly 40 people were killed when eight coaches and the engine of a passenger train derailed in the forest area of southern Andra Pradesh.
A 2012 government report said almost 15,000 people were killed every year on India's railways and described the loss of life as an annual "massacre".
Modi's government has pledged to invest $137 billion over five years to modernise the crumbling railways, making them safer, faster and more efficient.
His government has signed numerous deals with private companies to upgrade the network.
Japan has agreed to provide $12 billion in soft loans to build India's first bullet train, with Modi and Japanese Prime Minister Shinzo Abe expected to lay its foundation in September.