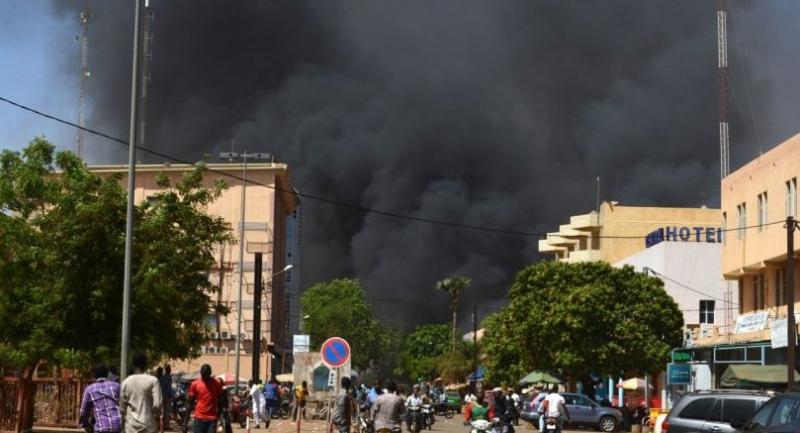 The capital of Burkina Faso came under multiple attacks on Friday, targeting the French embassy, the French cultural centre and the country's military headquarters, an AFP reporter and witnesses said.

Witnesses said five armed men got out of a car and opened fire on passersby before heading towards the embassy, in the centre of the city.
An AFP reporter heard heavy exchanges of gunfire and saw a blazing vehicle, which witnesses said was the car used by the assailants. Police and army units were deployed in the area.

Bystanders look on as security personnel move beside an armoured personnel carrier in Ouagadougou on March 2, 2018, as the capital of Burkina Faso came under multiple attacks targeting the French embassy, the French cultural centre and the country's military headquarters. // AFP PHOTO
Other witnesses said there was an explosion near the headquarters of the Burkinabe armed forces and the French cultural centre, which are located about a kilometre (half a mile) from the site of the first attack.
The French embassy confirmed that French interests were under attack.
"Attack under way at th French embassy and French Institute. Stay indoors," it said in a terse message posted on Facebook.
Burkina Faso is one of a string of fragile countries on the southern rim of the Sahara that are battling jihadist groups.
The insurgency has caused thousands of deaths, prompted tens of thousands to flee their homes and dealt crippling blows to economies that are already among the poorest in the world.
On August 13 last year, two assailants opened fire on a restaurant on Ouagadougou's main avenue, killing 19 people and wounded 21. The attack remains unclaimed.
On January 15 2016, 30 people, including six Canadians and five Europeans, were killed in a jihadist attack on a hotel and restaurant in the city centre.
Responsiblity was claimed by a group called Al-Qaeda in the Islamic Maghreb, which is known by its French acronym of AQMI.
France, the former colonial power in the Sahel region, has deployed 4,000 troops and is supporting a five-country joint force gathering Burkina Faso, Chad, Mali, Mauritania and Niger.
The United Nations also has a 12,000-strong peacekeeping force in Mali called MINUSMA, which has taken heavy casualties. Four UN peacekeepers were killed by a mine blast on Wednesday in the centre of the country.