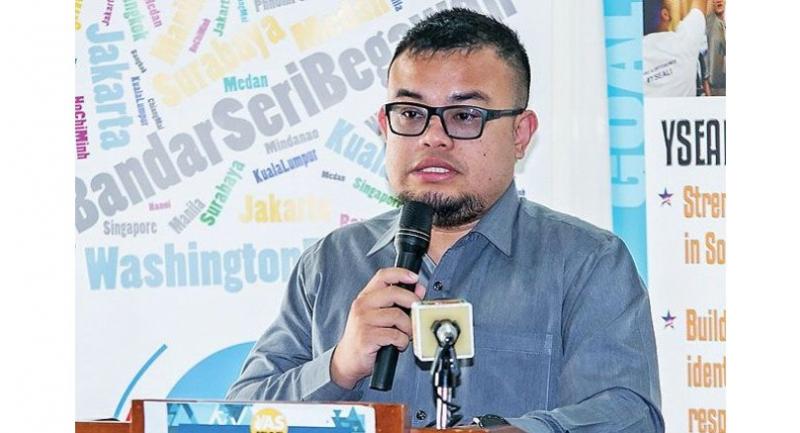 Human trafficking is becoming more prevalent and has become the second largest type of criminal activity, after illegal drug trade.

This was stated by member of the Legislative Council (LegCo) Yang Berhormat Iswandy bin Ahmad, while delivering a speech as guest of honour at the opening of the ‘Combating Trafficking in Persons’ conference (CTIP 2018) organised by Youth Against Slavery Brunei (YAS Brunei) at the ICTC2 Galley of the Universiti Brunei Darussalam (UBD) yesterday.

"We have seen an increase in the occurrence of trafficking in persons in recent years in every part of the world. It has become a global trend which our region is not immune to," he explained.

"Trafficking in persons is an insult to human dignity and is a heinous crime as it exploits human vulnerability for the purpose of servitude, slavery, forced labour, sexual exploitation and other forms by means of fraud, deception, abuse of power, coercion and abduction.

"The United Nations estimates that human trafficking has victimised 21 million men, women and children around the world. Between 600,000 and 800,000 victims are trafficked across borders globally each year.

"According to the UN Office on Drugs and Crime (UNODC), 79 per cent of human trafficking falls in the category of sexual exploitation, followed by forced labour at 18 per cent," he said.

"Perpetrators make more than USD20,000 a year from each victim of commercial sexual exploitation and about USD4,000 from forced labour exploitation. An International Labour Organization (ILO) report estimates that the Asia-Pacific region leads the world in annual profits of forced labour at USD51.8 billion dollars due to the high number of victims," he continued.

He further emphasised that traffickers now have become more refined in their use of information and communication technology (ICT) as a tool for recruiting and exploiting their victims.

ASEAN has 689 million mobile subscriptions, exceeding its population of around 660 million and the largest Internet users are people aged 15 to 24, followed by the 25-34 age group.

Yang Berhormat Iswandy highlighted that Brunei is ranked to have the highest usage of ICT and social media, adding that ICT opens up opportunities and also vulnerabilities for both youth and exploiters.

"Social media, as identified by UNODC, is a platform to prey on children for the purposes of sexual exploitation, drug trafficking and child labour," he said. He further noted that given the popularity of social media use in Asia, communications technology can be an amazing tool to empower individuals and communities to practise positive behaviours that protect them from human trafficking. The LegCo member emphasised on the cooperation between the government and non-governmental organisations (NGOs) which he said will play a significance role in addressing a multi-faceted problem such as trafficking.

"The government has to enforce existing laws and policies to properly and effectively combat trafficking; business sector has the responsibility to ensure clean supply chains; and NGOs have to promote awareness and provide assistance in protecting victims. Not to forget, every citizen, has a role to play in the campaign against trafficking," he said.

He concluded the speech by saying, "We need to start from something small. If not us, who? And, if not now, when?"