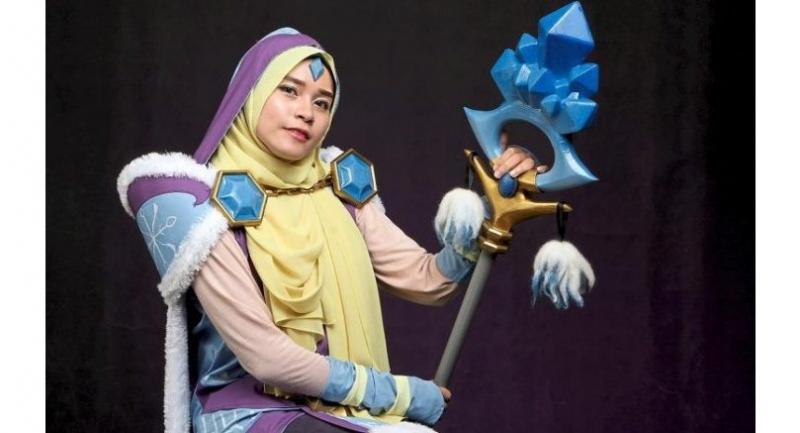 When she dons her costumes, cosplayer Saakira Izumi certainly grabs attention. There are no half measures.

In this recent midweek afternoon interview, she’s come dressed as one of her favourite characters – the Crystal Maiden from the video game Dota 2.

With cape, hood and a powerful-looking staff, Saakira’s costume is definitely striking. This cosplayer has also managed to incorporate her hijab naturally into her outfit.

Saakira is one of the highlights at the inaugural Star Supa Comic event, which takes place at the Mid Valley Exhibition Centre in Kuala Lumpur on Dec 29 and 30.

“It’s not difficult (to wear a hijab and cosplay). In some ways, it’s just like wearing a wig. You just have to find a hijab with the same colour as the hair of the character you are cosplaying,” says Saakira, whose real name is Nurul Syakirah Samsol.

“If you want to be even more creative, you can even style your hijab,” she adds.

Hijab cosplaying is gradually growing in popularity these days, not just in Malaysia, but around the world.

Part of the appeal of cosplay (an abbreviation of “costume play”) after all, is coming up with clever and functional costumes. This has led to many skilled Muslim cosplayers not just incorporating their hijab into their cosplay, but also designing their own outfits.

‘It’s not difficult (to wear a hijab and cosplay). In some ways, it’s just like wearing a wig,’ says Saakira. Photo: The Star/Yap Chee Hong

“I don’t like to mix religion with my hobbies. But I believe that you can have fun, as long as you stick within the boundaries (of decency).

“That’s what I think, other people may have different opinions, but that’s up to them,” says Saakira, 24, who is currently studying multimedia design at a local university.

The Klang, Selangor-based cosplayer has been cosplaying for about five years. She was inspired and influenced by fellow Malaysian Capries Ryn, another hijab cosplayer, who started cosplaying in 2012.

Capries and Saakira are now the Malaysian representatives of Hijab Cosplay Gallery, a group for hijab cosplayers in Malaysia and Indonesia. The group has 100 members, who meet at various regional events, hang out or attend gatherings held by the society every year.

Saakira started her cosplay by dressing as “cute characters” such as Hatsune Miku, a Vocaloid singing personality. She is also a fan of the “sweet Lolita” style, a Japanese fashion subculture influenced by elaborate and elegant Victorian clothes.

Soon, she started getting noticed, to the point that she was invited to give interviews on local TV about her unique fashion style.

‘What’s most important about a costume is to make the character recognisable. In this case, even though my costume is a bit different because of the hijab, you can still tell who it is,’ says Saakira, dressed up as the Crystal Maiden (from Dota 2). Photo: The Star/Yap Chee Hong

As time went on, however, Saakira started to experiment with various other characters, many of them from her favourite video games. She got into organising cosplay events, and started to join cosplay competitions, even winning prizes.

“When you first see me, you might think I don’t speak much. And in a way, that’s who I am in real life. But cosplay has helped me improve myself. It has given me the spirit to speak and perform. It’s taught me to be a leader and to learn new things,” she elaborates.

Saakira also makes many of her costumes herself.

“It is cheaper to do so than renting costumes. I picked up the basics from my mother, a tailor,” she reveals.

Saakira has since made 18 costumes, although she now keeps six.

Her Crystal Maiden outfit, she says, is one of the most challenging for her to make. The character appeals to her because of the pastel colours and modest dress sense.

“When making a costume, accuracy and quality are very important. But what’s most important about a costume is to make the character recognisable. For example, in this case, even though my costume is a bit different because of the hijab, you can still tell who it is,” says Saakira.

For Star Supa Comic, Nurul and her partner Aida, a full-time costume maker, will be presenting a costume creating workshop.

“Don’t be shy. If you really want to give it a try, don’t just watch. You have to go ahead and just do it,” she concludes with a smile.